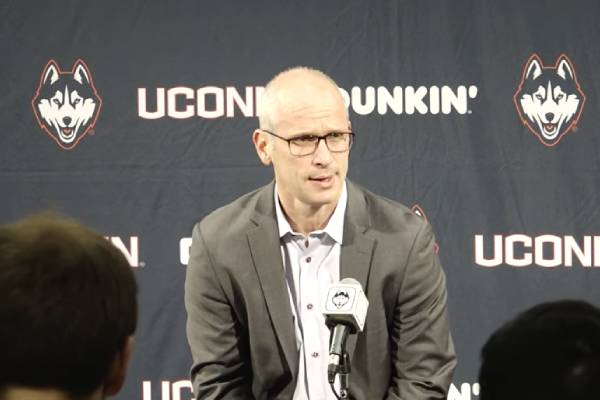 Born Daniel S. Hurley, Dan Hurley is a talented basketball coach of American nationality. He is the current head coach of UConn Huskies, the men’s basketball team of the University of Connecticut. The New Jersey native began his coaching career in 1996. Ever since then, he has established himself as one of the best coaching figures.

During his long career, Hurley has served different teams as an assistant coach and head coach. As a result, he must make enough money to make our jaws drop. Thus, let’s find out Dan Hurley’s net worth and salary in today’s article, including his different earning sources.

Dan Hurley Net Worth And Earnings

Dan Hurley is the son of Bob Hurley Sr., a Hall of Fame high school coach and former head coach of St. Anthony High School (now closed). As the child of a legendary basketball personality, the youngest Hurley must have inherited the love for the sport.

Thus, he started his playing career during his days at St. Anthony High School. Afterward, Hurley went to Seton Hall University in 1991 and graduated in 1996. He was an active student-athlete and played college basketball for five years, including a redshirt year. Following that, Dan entered into collegiate basketball coaching, where he is still active.

Along with providing the best platforms for players, UConn’s head coach is also famous for its significant paychecks. Thus, Dan Hurley’s net worth is undoubtedly a massive sum, thanks to his coaching career. Now, let’s further explore the earning sources of the talented former player below.

Immediately after graduating from the university, the Seton Hall alumnus started his coaching career. In 1996, St. Anthony High appointed him as their assistant coach under the head coach, Bob Hurley. His dad must have inspired him to pursue his career as a coach.

After serving as an assistant coach at Rutgers Scarlet Knights for a season, the former point guard landed his first job as a head coach of St. Benedict’s Preparatory School in 2001. Eventually, after serving two more collegiate basketball teams, he joined his current team in 2018. During all those years, Dan demonstrated his skills and established himself as one of the best coaches.

In 2018, the talented coach signed a six-year deal with a $2.75 million annual salary. In addition, he might also receive bonuses and incentives for accomplishing different goals and milestones. As per Bleacher Report, he chose the Uconn Huskies over the more lucrative deals from the University of Pittsburgh and a long-term extension from the University of Rhode Island.

On the other hand, Dan’s father, Bob Hurley’s net worth is $8 million. Moreover, there has been incredible growth in the basketball leagues. As a result, the paychecks of players and coaches have also increased drastically over the decade. So. there is no doubt that Dan Hurley’s salary will also rise with new upcoming seasons.

Likewise, Dan Hurley’s net worth will also continue to grow in the coming days. Hopefully, the talented coach continues to amass more fortune ahead.

As mentioned above, Dan Hurley’s income and net worth is a substantial amount. Therefore, he must also be living well along with his wife, Andrea Hurley, and sons, Danny Hurley and Andrew Hurley. Although the UConn head coach has not disclosed precise information, we can often get a glimpse of his comfortable lifestyle from his social media posts.

The Hurley family occasionally visits new places and enjoys each other’s company. Additionally, the coach must have bought some real estate properties and cars with his massive fortune. Also, during his first season with UConn Huskies, Dan threw a pool party to his team at his then recently bought Connecticut house. Furthermore, he also organized a cookout for Huskies players and staff at his Glastonbury home in 2021.

Nonetheless, Dan Hurley is living a comfortable life thanks to his enormous riches. Not only does he have a successful professional life, but also a wonderful family. We wish the head coach a more prosperous life in the coming days.