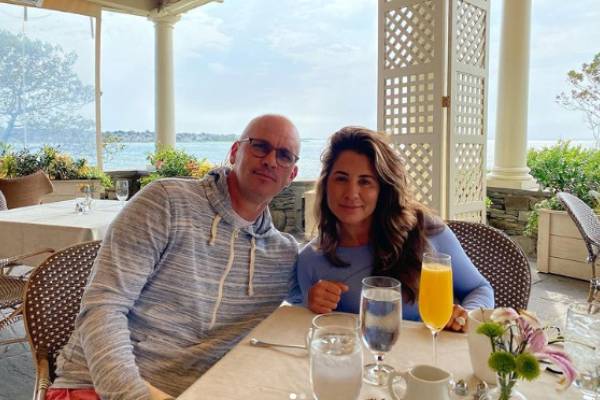 Daniel S. Hurley, simply Dan Hurley, is one of the most regarded and talented American college coaches. He began his career as a coach immediately after graduating from Seton Hall University. During his coaching career, he has served many teams, including St. Benedict’s Prep, Wanger, Rhode Island, etc.

Many of his fans are curious about the former point guard’s personal life. Well, he is a devoted family guy and a proud dad of two amazing sons. Thus, in today’s article, let’s get to know Dan Hurley’s wife. Follow us till the end to know how the adorable pair first met.

UConn Huskies head coach shares a blissful marital life with Andrea Sirakides Hurley. The adorable pair tied the knot in 1997 and are still happily together. The lovebirds first met while both were attending Seton Hall University. The duo must have developed an instant connection and started dating soon after.

Also, the collegiate coach once mentioned he met his spouse at the time when he needed a special person with whom he could develop a deep connection. He also credits her as his most influential person. Fast forward more than two decades, the couple still has a solid bond, and their marriage is standing firm.

Furthermore, Dan Hurley’s spouse is from Toms River, New Jersey. She is the daughter of Patti Klotz Sirakides and Ken Sirakides. Sadly, Andrea Hurley’s father passed away on 16 August 2005. Nevertheless, the coach’s better half seems to have grown up happily along with her family. In one of her Instagram posts, she remembered how her family went on a trip to the macro island, and she enjoyed parasailing with her late dad.

Besides, Andrea’s mother works as a radiation therapist at Jersey Shore University Medical Center. She is a graduate of Weber State University. Also, Dan’s ladylove seems to have a few siblings whose details are still confidential.

The gorgeous lady is a co-host of the podcast “Ball is Wife” with her friend, Nicole Flory, who is Derek Kellogg‘s wife. It is a weekly iHeart Radio podcast that offers a candid look at what it is like to be married to a sports personality.

As the partner of a Division I college basketball coach, Mrs. Hurley long avoided her husband’s competitors’ spouses. It all changed after she met her pal, Nicole, back in the late 2010s, and they became friends fast. Moreover, after launching their podcast, the hosts’ first guest was Dan, with whom Andrea rehashed fights over long work hours.

As reported by the New York Post, the Ball is Wife co-host was hoping to interview spouses of pro players. Also, she said that the show would appeal to anyone involved in sports or coaching at any level. The door is open to husbands as well.

Is A Loving Mother Of Two

Apart from marital bliss, Andrea and her partner are blessed with two amazing boys. Dan Hurley’s wife was just 22 when she gave birth to their first baby, Danny Hurley, in July 1999. After three years, the lovely duo welcomed their youngest son, Andrew Robert Hurley, Andrew Hurley, on 30 January 2002.

Furthermore, Dan Hurley’s son, Danny, graduated from Seton Hall University with a Bachelor’s degree in arts in 2021. He is currently doing a Master’s Degree in Public Administration at the same college. Also, the eldest Hurley works as the aide to Governor Phil Murphy, the 56th governor of the Garden State.

On the other hand, the youngest Hurley first attended Bishop Hendricken High School before transferring to East Catholic High and graduating in 2020. Afterward, he enrolled at the University of Connecticut, where he currently plays basketball.

Overall, Dan Hurley’s wife lives a comfortable life with her husband and kids. In addition, she is a bright and cheerful person who is devoted to her family. We wish Andrea Hurley and her family a happy and prosperous life ahead.