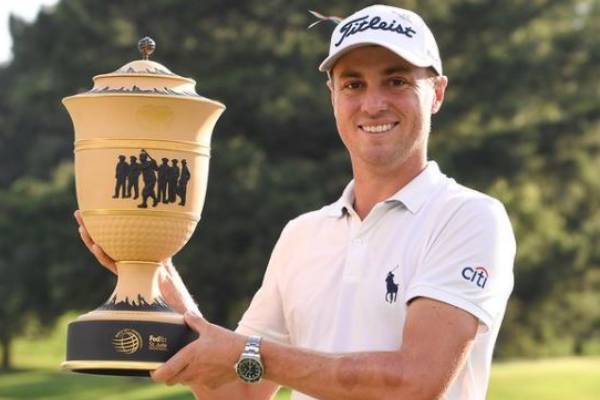 Justin Thomas has accumulated a multi-million dollar worth of fortune from his golfing career. Image source: Justin Thomas Instagram.

Justin Louis Thomas, aka Justin Thomas, is a professional golfer from America. As a former World Number One, he plays on the PGA Tour. He has participated in several golf events and tournaments in his career and has gained victory in some of them.

According to Celebrity Net Worth, Justin Thomas’s net worth is estimated to be $30 million. Here, let’s learn more about how the talented golfer Justin was able to amass such an immense fortune to his name and his earning details.

Justin Thomas Net Worth And Career

As stated earlier, Justin Thomas’s fortune is estimated to be $30 million. The wealth that he has accumulated comprises his income from the tournaments that he has participated in, prize money, sponsors, and several other ventures. He started playing golf at a very young age and turned professional in 2013.

As stated earlier, Justin Thomas has competed in many tournaments in his career. Before turning professional in 2013, he had played in the Wyndham Championship on the PGA Tour in August 2009. As a result, he became the third-youngest to make the cut in a PGA Tour event.

Furthermore, Justin also played college golf at the University of Alabama. At that time, he won six times for the university golf team, Crimson Tide. He has won several awards and titles from the number of tournaments that he has competed in.

Here are some of the tournaments that he has competed in and his earnings in different seasons.

The talented golfer Justin has played a total of 173 events and has earned a total of $43,456,617 to date. With the career earnings like that, he is among the highest-earning golfers.

Furthermore, according to Forbes, he had his most successful tenure in terms of earnings from 2016 to 2018. During that time, he made around $21 million including the bonus he received from his FedEx Cup and Masters’ triumph.

Talking about endorsements, Justin has been endorsed by several brands, which have contributed significantly to increase his net worth. In his career, he has built a lucrative and impressive endorsement portfolio. His main sponsorship is with Titleist, one of the biggest golf brands providing different golf equipment like golf balls with its famous Pro V1 franchise.

Furthermore, Justin is sponsored by brands like NetJets, Citi, and many others. In addition, he formed a partnership with Lineage Logistics in May 2021. As part of its sponsorship, Justin will wear its logo during official tournaments. And in return for that, the company will commit $100,000 to the Justin Thomas Foundation.

In addition, Justin collaborated with Scotty Cameron on a puter called the ‘Scotty Cameron Inspired by Justin Thomas Phantom X5.5, in September 2020.

Thus, Justin must have earned significantly from the endorsement and sponsorship deals with several brands. Due to earlier mentioned reasons, Justin Thomas’s net worth of $30 million seems plausible. Plus, we can hope that his fortune increases in the future.

In 2019, Justin established the Justin Thomas Foundation to promote junior golf and humanitarian goals like assisting military families and children in need. The organizations that have worked with them are the Boys & Girls Club of Kentuckiana, USA Cares, and The First Tee.

Similarly, Justin has also played in different charity events alongside famous players like Tiger Woods and Rory McIlroy in order to raise funds for various causes.

From the massive sum he has accumulated from his career, Justin has donated a significant amount to various charities.

As stated earlier, Justin Thomas’s net worth is $30 million. All thanks to his fortune, he is able to afford a comfortable and privileged lifestyle. With such a massive fortune, Justin might also pay a significant sum in taxes.

Thomas lives a blissful life with his girlfriend Jillian Wisniewski in Goshen, Kentucky. Furthermore, he bought a house in 2016 at Jupiter, Florida, with fellow PGA Tour pro, Bud Cauley. It is unclear if Thomas and his girlfriend still reside there or if they own another property.

Moreover, Justin is known to be a shoe collector, as he has a huge collection of shoes. He often sports Yeezys or Air Jordan off the course. Similarly, in 2017, FootJoy, his footwear sponsor, custom-designed a Player of The Year-Inspired shoe for him. The shoe also included graphics of his season highlights.

In January 2017, Thomas bought a custom, Range Rover. He uploaded the photo of the car on Snapchat. He seems to have a great interest in cars, and he must have an insurance policy for his car.

Hence, Justin Thomas’s multimillion fortune has helped him enjoy a lavish lifestyle. And we hope he continues to prosper in his life in the coming days.