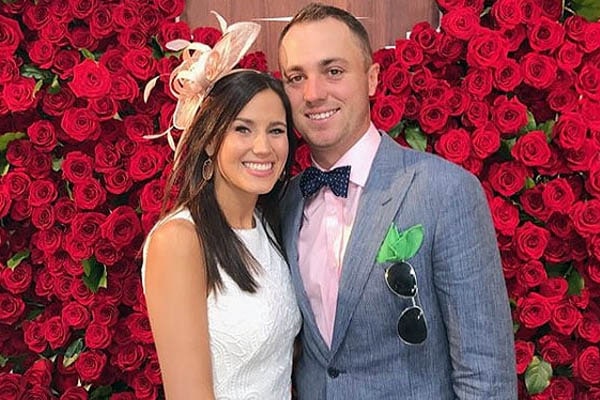 Justin Thomas is a notorious American professional golfer who currently plays on the PGA Tour. The former World Number One, Thomas, experienced a breakout year in 2017, winning five PGA Tour Events, including the PGA Championship. Besides, he is the winner of the 2017 FedEx Cup championship and the 2017 and 2020 PGA Player of the Year.

Justin Thomas Has Been Dating Jillian Wisniewski For Several Years

It has been over five years since Thomas and Wisniewski began their romantic relationship publicly. With passing time, their love and care for one another also seem to have increased. Seeing their growing affinity towards one another, one can only expect Thomas to soon propose to his girl with an engagement ring. We hope we will get to hear the news of this pair tying their marital knot shortly.

ALSO READ: Peek Into The Love Life Of Rod Stewart And Penny Lancaster

Justin Thomas’s girlfriend, Jillian Wisniewski, regularly attends her boyfriend’s golf tournaments. But sometimes, her work commitments get in their way, due to which she misses his tournaments sometimes. In 2017, Jillian almost missed her love, Justin’s first major victory.

Jillian Wisniewski was with her boyfriend, Justin Thomas, at the 2017 golf tournament. However, she was due to leave some hours before the competition ended. But, Justin Thomas convinced her to stay and change her flight to later.

While talking to The Sun, Justin Thomas said that he truly felt like he would win. At the same time, he remembered Jillian was supposed to fly out at about 7 pm. So, he told his partner Jillian to change her flight timing as he did not want her to miss his major win. As per Thomas’s request, Wisniewski stayed, and luckily, he won the PGA Championship.

According to various sources, Justin Thomas’s girlfriend, Jillian Wisniewski, is a graduate of the University of Kentucky with a B.A. in Journalism. As mentioned on her Linkedin account, after completion of her BA, Wisniewski joined McGarryBowen, a traditional creative agency based in Chicago as an Administrative Assistant. Currently, she handles the post of Production Business Manager and Senior Business Manager in the same agency. Wisniewski had interned as an Associate Broadcast Production Intern from the same agency in 2014.

Furthermore, before joining McGarryBowen, Jillian served as a Student Center Service Representative at her alum’s Student Center. Similarly, she was also the reporter, producer, anchor, and writer at the University of Kentucky Student News Network. Also, Wisniewski was a nanny for the McCahill family for a year.

Besides working in the McGarryBowen agency, Jillian Wisniewski also works at Rodan + Fields Company as an Independent Consultant. It is a skincare company founded by dermatologists Dr. Katie Rodan and Dr. Kathy Fields to give their clients the best skin of their lives.

Currently, Jillian Wisniewski is Justin Thomas’ girlfriend. And only time will tell us if she will get the title of Justin Thomas’s wife or not.