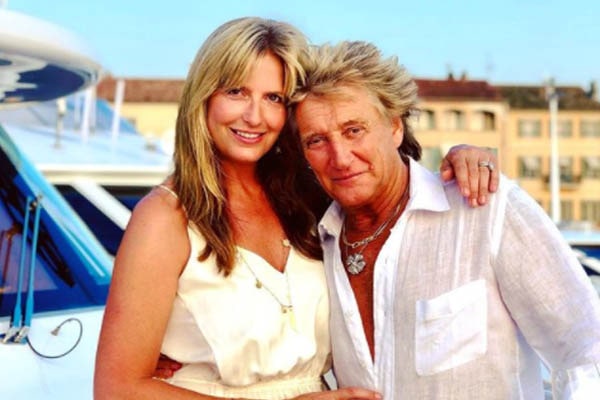 Rod Stewart is a world-famous British singer, songwriter, and record producer who has sold over 250 million records to date. One of the world’s best-selling record producers, Stewart began his career in the British music industry in the early 1960s and was already gaining fame till the late 1960s. Currently, he is regarded as one of the most-loved musicians worldwide, having worked with numerous music artists and groups to date. For his contribution to music and charity, Queen Elizabeth II knighted him in the 2016 Birthday Honours.

The versatile singer with a distinctive raspy voice, Rod Stewart was in a romantic relationship with a couple of ladies and married thrice in his lifetime. His first marriage was with the American actress Alana Stewart from 1979 to 1984. Then, he married Rachel Hunter in 1990 and eventually divorced her in 2006 after staying separately for almost seven years. Finally, he found his permanent love, Penny Lancaster, with whom he married in 2007 and has been enjoying marital bliss ever since.

Here, look into the happy married life of the beautiful couple, Rod Stewart and Penny Lancaster-Stewart, and if they have kids together.

The current husband-wife duo, Rod Stewart and Penny Lancaster, met for the first time in 1999 when Rod had just separated with his former wife, Rachel Hunter. The professional photographer, Penny Lancaster, told Loose Women that she got an invitation to go to a concert and click Rod’s photos. When Penny met Rod, he got her phone number and gave it to the bass player. His bandmate kept it for six months thinking Rod was not ready to date again.

However, six months later, Rod Stewart called Penny while looking for a new love. He asked Penny for dinner with some of his friends. Rod told the Daily Mail that Penny’s fresh face and girlish demeanor immediately struck him on their first date. They started dating publicly and are together ever since.

Furthermore, Rod Stewart and Penny Lancaster kissed for the first time at Rod’s house. During an interview, Rod said that it was an upside-down kiss. He walked around until he was directly behind her, on the other side of the bed. Then, he put his hands on Penny’s shoulders, leaned forward, and kissed her.

At the time of Rod Stewart and Penny Lancaster’s meeting, the gorgeous beauty Penny was in a relationship with the city trader Mickey Sloan. Despite her then-boyfriend, Rod Stewart’s warning to her that he had no interest in retaking wedding vows, she chose him and broke up with Sloan. Their relationship went slowly but steadily.

Rod Stewart mentioned in his memoir that he fell head over heels in love, but he needed to be sure that time. He needed to take patient steps. So, he duly embarked upon something that he seemed to have been largely allergic to down the years, a long courtship.

It took Rod Stewart almost six years to decide if he really wanted to change his statement of never to marry and have children again. In 2005, on his beau’s birthday, Rod took Penny and her parents to Paris for dinner. On the way, he asked Penny’s dad’s permission to make her his wife. Then, at the bar of the Jules Verne Restaurant on the second platform of the Eiffel Tower, Rod proposed Penny.

For some moments, Penny was surprised seeing her man, who had vowed to never marry again, on one knee before her. But, she immediately said Yes, and the two started planning for their wedding day. Rod officially divorced his second wife a year later in 2006.

Two years after their engagement, Rod Stewart and Penny Lancaster finally decided to exchange the wedding vows. While talking to a British newspaper, Penny said that marriage is once in a lifetime. So, she wanted a perfect one. She added that for her, a wedding day is just that romantic girl’s dream of her dad walking down the aisle with her and all her close ones coming together. And, her big day was just how she always dreamt for.

Cheers to my beautiful wife, 13-in-a-row!

Rod Stewart and Penny Lancaster walked down the aisle together on 16 June 2007 outside the Italian Riviera resort of Portofino. Stewart’s representative told the People magazine that the pair exchanged vows in a cloistered medieval abbey at La Cervara in the presence of 100 family members and friends. They fixed their reception ceremony at Santa Margherita’s coast, with dancing, dinner, and fireworks.

A private ceremony took place earlier than their wedding in front of their close ones at the 17th Century Villa Durazzo in Santa Margharita. Only the groom, the bride, and two witnesses were present when the groom gave his bride a huge white diamond ring. Later, Rod Stewart and Penny Lancaster hired photographers privately to click their photos.

It has been over two decades since music legend Rod Stewart and T.V. personality Penny Lancaster are together. But, unlike Rod’s previous relationships, his current marriage with Penny is getting stronger with time.

Parents To Two Kids Together

The togetherness of Rod Stewart and Penny Lancaster have blessed them with two adorable sons. Their first child, Alastair Wallace Stewart, arrived the same year they got engaged in November 2005. Similarly, their second son, Aiden Patrick Stewart, joined the family in February 2011. Currently, both of Rod Stewart’s sons with his beloved wife, Penny Lancaster, share their dad’s love for music and are active in several games and activities as well.

Besides, Stewart and Lancaster are also proud parents of Rod Stewart’s children from his previous relationships. Though at first, Rod Stewart’s kids were skeptical about Penny, they share a great bond with her in the present. Rod feels so lucky that he got Penny as his life partner, who is keeping his blended family together.

The long-time married pair, Rod, and Penny cherish every moment they get to spend together. For Rod, Penny is his whole world, and he loves her more now than ever. They have been together for almost 22 years now, and we hope it continues for 22 more.