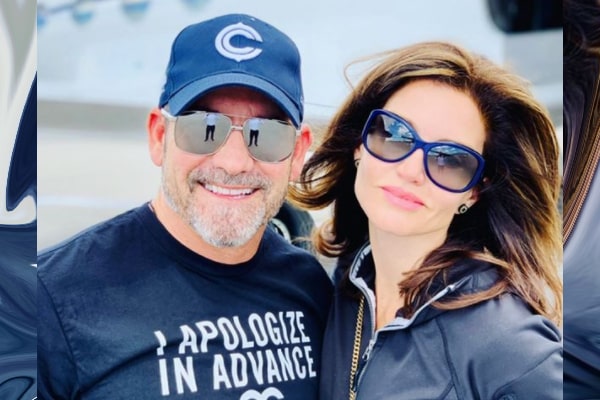 Grant Cardone And Elena Lyons are together since 2003 and have grown massively as both business and life partners. Image Source: Elena Cardone's Instagram.

Grant Cardone and Elena Lyons Cardone are among the most potent and sought-after duos in the entrepreneurial world today. The pair became an aspiration for many people as they built an entire empire together.

Furthermore, the Cardone couple shares many things in common, including their troubling childhood. Moreover, we know the pair’s ventures together, but how much do we know about their marriage and inner struggle? Very little, eh?

Therefore, here we are about to dissect Grant Cardone and Elena Lyons‘ marriage and the secret behind their 16 years of blissful marital life. Thus, could you stick with us until the very end?

Aforementioned, the Cardone couple, Grant Cardone and Elena Lyons, have been together for 16 years, and they still share the same passion for one another.

Elena and Grant’s paths crossed in 2003 for the first time. Mrs. Elena Cardone was still a struggling actress-cum-model at the time. Well, sparks immediately started between the two, and they started their relationship right away.

Within a year of courtship, Elena and Grant Cardone walked down the aisle on July 4, 2004, amidst friends and families. The couple kept their wedding details to themselves, but the ceremony must have been posh and intimate.

Since 2003, the power duo has been a massive supportive pillar for one another’s success. In one of Grant Cardone’s blogs, he disclosed that he was married previously, which barely lasted a year.

Moreover, Grant also emphasized how important it is to be on the same page as one’s partner for the relationship to work. He wrote, “I’m not a two kid-two dogs-job-white picket fence kind of guy.” Grant continued, “Now I’ve been married 13 years to Elena, who is 100% on the same page with me.”

Therefore, the secret behind the Cardone couple’s lasting marriage is their mutual understanding and desire to accomplish more. Since then, the couple released several shows together and have worked on multiple projects as well.

Moreover, the pair also revealed that they had gone through the power struggle phase and someone had to tone down their perception in order to make things work. Thus, we got the beautiful and ever-so-loving Cardone couple.

Aforementioned, both Grant and Elena are aspiring individuals, and they come from very different backgrounds. However, they do share similar childhood tragedies.

Elena was only 13 years old when she lost her childhood best friend, Goldie. They lived across the street, and her father announced that Goldie’s house was on fire. Elena and her WWII veteran father joined the futile efforts to douse the flames with buckets.

Unfortunately, the flames engulfed Elena’s best friend and her mother. The incident traumatized her for several years, but her parents raised her in a loving and emotionally guarded family.

Furthermore, Grant Cardone’s wife, Elena, left home at 17 years old and became one of Maxim’s top models. She also achieved a little bit of success as an actress. However, she knew the show biz was a facade and drowned herself in alcohol and drugs.

Similarly, Elena Cardone’s husband, Grant Cardone, overcame the grappling pain of losing his father when he was 10. He also witnessed his mother’s grief turned into fear.

The pair numbed their pain and fought their way up to success, and are living like emperors.

Built An Empire Together

The Cardone couple is one of the mightiest pairs in Hollywood these days. Both Grant Cardone and Elena Lyons worked tirelessly to build a business empire.

The Cardone pair hosts ‘The G&E Show’ together. While Grant is out and about, speaking about investment and making tours globally, Elena keeps her family grounded and protects a life ‘outside of the ordinary.’

Both Elena and Grant travel the world sharing their insight, experience, building a whole enterprise, creating an extraordinary 10X life and wit.

Moreover, Elena is also the architect behind many of Grant Cardone Enterprises. As a result, the Cardone couple has created a real estate portfolio of $1.9 billion and many more.

However massive a couple’s business and net worth could be, their pure joy and biggest asset are their children. Thus, Grant Cardone and Elena Cardone are proud parents of two stunning baby girls.

Aforementioned, the Cardone couple is blissfully married since 2004. They welcomed their first bundle of joy, Sabrina Cardone, in 2009.

Grant and Elena Cardone’s daughter, Sabrina, is confident, athletic, and intelligent. She also appeared at her parents’ 10X Growth conference and shared her views with thousands of people.

Likewise, Elena gave birth to her second daughter, Scarlett Cardone, in 2011. The nine-year-old is unbelievably stunning, and her confidence is astounding.

Both the Cardone children are pretty active on Instagram. The eldest Cardone, Sabrina, has got 22.8K followers while Scarlett entertains 14K+ followers on her Instagram.

Furthermore, Grant and Elena are home-schooling their daughters and hence get to spend a lot of time together. Moreover, the Cardones work as a team and value one another’s role as a family.

Well, Grant Cardone and Elena Cardone’s life trajectory changed massively after their paths crossed. And today, they are reckoned as one of the most potent duos. Hence, let’s hope to hear more of them in the future.