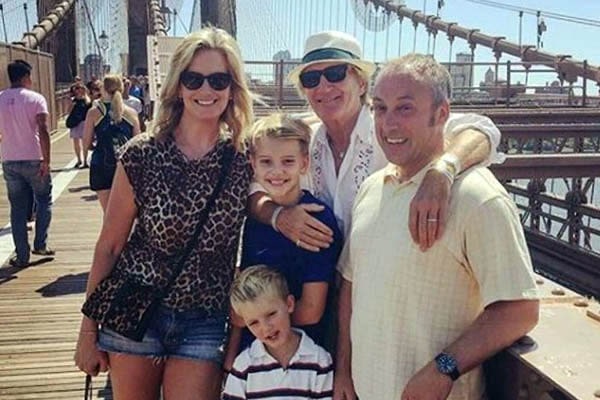 Rod Stewart, born Roderick David Stewart, is a well-recognized British songwriter and singer. His raspy, soulful voice is winning the hearts of millions of rock and pop music fans worldwide since the late 1960s. Stewart first came to prominence after the release of his landmark album, Every Picture Tells a Story, in 1971. Currently, he is one of the best-selling music artists of all time who have sold over 250 million records worldwide.

The legendary musician Rod Stewart married thrice in his lifetime and was in a relationship with numerous women. Currently married to Penny Lancaster-Stewart, Rod is a father to eight kids, including two sons with his current wife. Here, get to know some details on one of Rod Stewart’s sons with Penny, Aiden Patrick Stewart.

Second Child Of Rod Stewart With His Wife Penny Lancaster

While talking to the Hello Magazine, the overwhelmed father Rod Stewart, revealed that Aiden is their miracle baby, referring to the fertility problems he and his wife encountered. Aiden’s mom, Penny, underwent two tiring rounds of IVF before successfully conceiving Aiden on their third try.

Furthermore, the former model, Penny Lancaster, also was in tears when she spoke of her happiness of having Aiden in her life. She said that Aiden was the best birthday gift she could have ever wished for. Rod told the media that Aiden is his and his wife’s last child as he can’t have any more kids. He even joked that if he plans for another baby, then he will be touring until he is 90. However, Stewart also admitted that his decision might change if Mrs. Stewart wants to have more kids.

Aforementioned, Aiden Patrick Stewart is the second child of his parents. He has an elder brother named Alastair Wallace Stewart, born in November 2005 in London. Aiden’s brother, Alastair, joined the family two years before their parent’s marriage on 16 June 2007.

Rod Stewart’s son, Aiden Patrick Stewart, is very close with all of his brother and half-siblings. The Stewart offspring love spending their quality time together, traveling to various places, and learning music from their rockstar dad. Some of Aiden’s half-siblings are even already in the music industry.

Adorable Rod Stewart’s son, Aiden Patrick Stewart, is a versatile lad. The ten-year-old handsome Aiden is a great dancer. In 2018, at seven, he captured the hearts of hundreds of live audiences during a concert in Nashville, USA. Aiden showcased his floss dance moves before impulsively break-dancing in front of his dance fans. His mom, Penny, shared a clip of his big moment on her Instagram account.

Furthermore, Rod Stewart’s son, Aiden, is also an emerging soccer player. His parents often film him honing his skills on the pitch featuring a big Hoops flag behind the goals and post some on their respective Instagram. To motivate Aiden in sports, his mom and dad even put him on training when he was seven. Probably, till now, he is already a pro at playing soccer.

Moreover, the talented little guy of Rod Stewart and Penny Lancaster, Aiden, even shows interest in music as well. Along with his rockstar dad’s constant supervision, Aiden often takes guitar lessons from his sister, Ruby, who is also a famous British singer now.

Aiden is already good in almost every field at such an early age of ten. But, it is on him which field he will choose as his career when he grows up.

Aiden is a Gaelic origin name that means fire. Similarly, the middle name Patrick is a masculine given name derived from the Latin name Patricius which means nobleman.