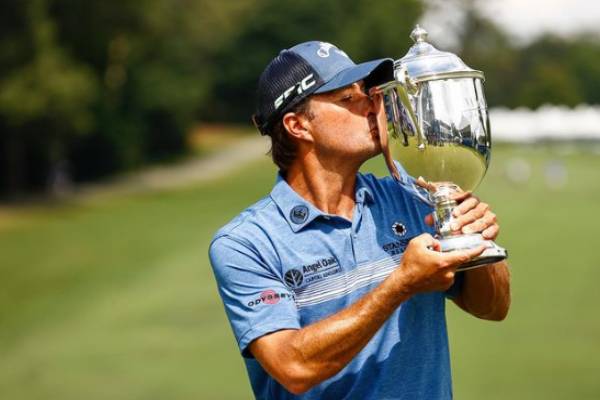 During his career, Kevin climbed up the long steps of the hierarchy and established himself as one of the best golfers. He has amassed both fame and fortune with his golfing career. If you wonder how much the famous golfer makes from his profession as a golfer, you are in the right place. Keep reading to know details about Kevin Kisner’s net worth, earnings, and income sources.

Kevin Kisner Net Worth And Earnings

Kevin Kisner was born in Aiken, South Carolina, and went to South Aiken High School. Later, he attended the University of Georgia to study business management and played golf at the university. In addition, he was a member of the college’s NCAA Division I Championship team along with Chris Kirk, Richard Scott, and Brendon Todd in 2005.

Alongside being one of the best golfers, the 2021 Wyndham Champion earns a massive amount of money. As reported by Celebrity Net Worth, Kevin Kisner’s net worth is $9 million.

So, let’s break down his income and earnings as a professional golfer below.

After graduating from the university, Kevin Kisner turned professional in 2006. He started his professional career by playing on the mini-tours, including NGA Hooters Tour and Tarheel Tour, from 2007 to 2009. During that time, he won three times.

Furthermore, the golfer played on the Nationwide Tour full-time in 2010 and won just once at the Mylan Classic. Afterward, he ranked 11th on the money list and earned his PGA Tour card in 2011.

However, the professional player failed to earn enough money on the PGA Tour in 2011 to keep his card. Although the golfer was 181st on the money list, he finished T-11 at a qualifying school to earn his card for the next year, i.e., 2012.

Unfortunately, he again failed to retain his card and returned to Web.com Tour in 2013. After completing 13th on the 2013 Web.com Tour regular-season money list, he was again able to earn his 2014 PGA Tour Card and has been playing in the tour.

In addition, he has won several championships and titles in several tournaments. Along with that, he has earned a massive amount of money.

Here are some of the tournaments he has competed in and Kevin Kisner’s earnings in each of them.

Also Read: Income And Net Worth Of A Famous Golfer, Justin Thomas

Talking about the endorsement, Kevin has promoted several brands, including, Budweiser and Finger Tracer. All those involvement have contributed significantly to his net worth.

Additionally, he is the brand ambassador of Omni Hotels & Resorts and Stansberry Research.

Besides, the golfer has his own clothing brand, Land of Thee, which sells merches, caps, and T-shirts. With all that said, there is no surprise how Kevin Kisner has garnered such a huge amount of money.

Kevin Kisner and his wife, Brittany Anne DeJarnett, have founded the Kisner Foundation. The foundation aims to support organizations that serve children in child health, education, and youth sports around Kisner’s hometown.

Furthermore, the sales of Kisner’s brand Land of Thee go to the foundation.

We are able to do these things with all the generous support from you guys. We are adding new T-shirt’s to the @landofthee site and one might even say, “this ain’t no hobby”! The foundation gets all proceeds from these sales because we have a great partner! https://t.co/i2EY5kQGBB

Not only that but several other programs and organizations have benefited from the unconditional support of the foundation. Hopefully, Kisner will continue to showcase his generosity in the coming days.

With all the money the player has amassed with his career and other lucrative sources, he can easily afford a luxurious life for himself and his family.

Thanks to his massive fortune, Kevin lives in the 1950s-era house off the 17th fairway at Palmetto Golf Club. In 2021, when the house was being expanded, he lived at Sea Island. Furthermore, Kevin Kisner’s first car was a Chevrolet Blazer and must have collected a few cars by now.

Nonetheless, Kevin Kisner’s net worth is in multimillions, and it must have helped him live a lavish lifestyle with his family. So let’s hope the talented golfer continues to prosper more in his life in the future.