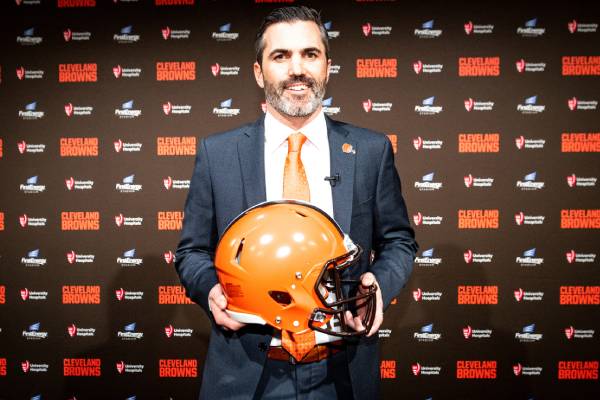 Kevin Stefanski has amassed a significant amount as a head coach and an assistant coach in NFL. Image Source: Cleveland Browns Twitter.

National Football League (NFL) comprises many teams, including players, managers, and coaches. It has become a source of income and fame for people involved in football. One such person who has earned both name and fame in the sports industry is Kevin Stefanski. He is the head coach for the Cleveland Browns, who debuted in NFL through the assistant coach position for the Minnesota Vikings.

Apart from the fame, Kevin has also achieved significant success in his professional career. As a result, he has become able to have a huge fan base around the world. His followers are curious to know about the earnings and wealth that he has amassed to his name. Thus, in this article, let’s know about Kevin Stefanski’s net worth and earning details.

Kevin Stefanski Net Worth And Earnings

As mentioned earlier, Cleveland Browns’ head coach, Kevin Stefanski, has gained immense fame and success in his professional career. And no doubt that he has amassed a massive sum of money as his fortune. However, the actual amount has not been revealed yet. But some of the sites have reported that Kevin Stefanski’s net worth is $10 million.

Nevertheless, whatever the amount might be, Kevin seems to have earned a lot to his name. Now that we have learned about his riches, let’s know further about Kevin Stefanski’s earnings and income sources.

Unlike other NFL coaches, Cleveland Browns’ coach, Kevin Stefanski, had a brief playing career. His collegiate football was at the University of Pennsylvania as a defensive back. Furthermore, in 2000 he was also named the team’s Freshman of the Year. While at Penn Quakers Football team, he also worked as an Assistant director of football operations.

In 2006, Kevin entered the National Football league (NFL) by joining the Minnesota Vikings as an assistant coach to the former head coach Brad Childress. He worked with the Vikings for 13 years, and in all these years, he served in a different position. He was assistant coach to Brad for two years and was promoted to assistant quarterbacks coach in 2009. As a result, he worked with quarterbacks coach Brett Favre and Kevin Rogers.

In addition, while the teams’ head coach and quarterbacks coach changed in the next two years, Kevin continued to work in the position. Then, in 2014, he worked as the tight ends coach and running backs coach. He worked with the team until the end of the 2019 season.

According to a 2020 Yahoo Finance article, the average salary of an assistant coach in the NFL was $150,000-175,000 in 2017. So, Kevin must have earned around the same range. Thus, Kevin Stefanski’s net worth must have increased considerably over the years.

Also Read: Know About Zac Taylor’s Net Worth And Earnings

After working as an assistant coach for the Minnesota Vikings for 13 years, Kevin Stefanski joined the Cleveland Browns in 2020. He signed a five-year deal with the Browns on January 13, 2020, and became the 18th coach of the team. According to ABTC, Kevin earns over $6 million as his base salary from the team. Moreover, it has been reported that the amount is exclusive of his tie-up deals with many brands.

A year ago today we hired Kevin Stefanski as our head coach.

This Sunday we’re playing in the Divisional Round of the #NFLPlayoffs. 👏 pic.twitter.com/owLWoFkwlF

In addition, as of the 2021 season, Kevin, with earnings of $3.5 million, made it to the 20th position for the highest-paid NFL coaches’ list. Looking at his earnings, Kevin’s riches of $10 million seems reasonable.

As he continues his works as the team’s head coach, there’s no doubt that he will earn more in the coming days. So, Kevin Stefanski’s net worth is likely to increase in the future.

As mentioned earlier, Kevin Stefanski’s fortune is estimated to be in millions. With a multi-million dollars worth wealth that he has amassed to his name, there’s no doubt that the Browns’ coach lives a comfortable life. He resides in Cleveland with his wife Michelle Stefanski and three kids, Will Stefanski, Gabe Stefanski, and Juliette Stefanski.

Plus, the Stefanski family previously resided in Minnesota and moved to Cleveland after Kevin was appointed as the team’s head coach. Let’s hope Kevin’s riches increase in the future, and he continues to live a comfortable life with his kids and wife.