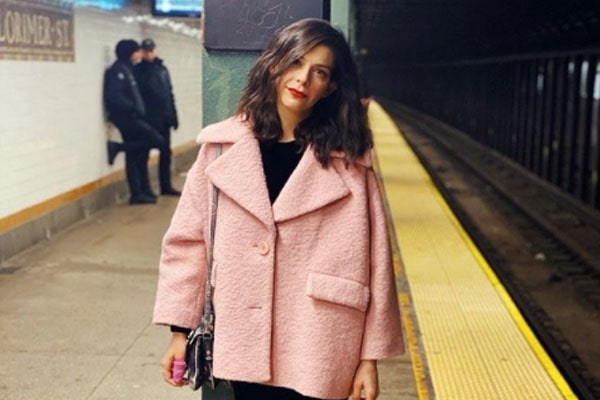 If you are a fan of the US mockumentary series, The Office, then Lindsey Broad does not need much introduction. Though Broad appeared only in season 8, she succeeded in winning thousands of viewer’s hearts by playing Cathy Simms, the temporary replacement of Pam, while Jenna Fischer was on maternity leave. Besides, Broad’s acting credits include several other TV series, including the HBO show Hello Ladies, Benders, and ‘Til Death.

Despite being a famous personality, the beautiful actress, Lindsey Broad, has managed to keep details on her professional life besides acting out of the public eyes. Still, we have gathered some information that might help you know Lindsey Broad’s net worth and how much she earns from her career as an acclaimed actress.

As known to many, the American actress Lindsey is active in the film industry since early 2006. Most of Lindsey Broad’s net worth credit goes to her successful career as a television, stage, and film actress.

Lindsey Broad first gained fame from the 2006 web series The Burg, where she portrayed the role of Spring. While Broad was still a cast member of The Burg, she appeared in several other TV series such as Gossip Girl, Without a Trace, and Ghost Whisper. Also, Lindsey regularly played the character Allison Stark in the Fox network’s sitcom ‘Til Death.

Broad joined one of the world’s most loved mockumentary sitcoms, The Office‘s cast, in 2011 and played Cathy Simms for 12 episodes till 2012. Lindsey then went on to star in other popular TV series like Zoo, Blindspot, Kevin Can Wait, and many more. Since 2019, Broad is regularly portraying the role of Chelsea in the crime drama series In The Dark. Here, know how much she earned from some of those TV series to support her total assets.

Earnings From The Office And Other TV Shows

Aforementioned, Lindsey Broad appeared in The Office only in season 8 in the role of Cathy Simms as a short-time replacement of Jenna Fischer, who portrayed the role of Pam Beesly. According to sources, before taking maternity leave, Fisher was paid $100K per episode from The Office. So, it’s speculated that Broad might have pocketed a similar amount for her role in 12 episodes of season 8.

The first season of #BENDERS is now streaming on Netflix! The New York Times says it “can impart a calming buzz”! pic.twitter.com/KWkVh9PJR7

Furthermore, besides amassing an impressive sum of money from several other TV shows, Lindsey Broad bagged some dollars from a couple of big films as well. Broad appeared as Pocket Dial Girl in the 2010 comedy film Get Him To the Greek, Lisa in the 2012 film 21 Jump Street, and as Lauren in the 2013 movie Don Jon. Although she was in minor roles, all those film producers might have paid her a considerable amount, which added to her increasing net worth.

Moreover, like many other celebrity personalities, Lindsey Broad might have a side business other than acting. She may be involved in some businesses when not busy with shooting. However, she has kept all of her other professions far from the media reach. We hope we will soon find out about her offscreen jobs and learn about her income.

As mentioned multiple times, Lindsey Broad is quite secretive regarding her offscreen professions. However, she is a bit open about her husband, Sean Bradley, who reportedly is a video editor, and her two little boys. Broad often shares pictures of her better half, Sean, and her sons, Teddy Bradley and Harry Bradley, on her social media pages.

Going through the social media pages of Lindsey Broad, it looks like she is earning enough to enjoy a luxurious life with her family of four. She frequently posts photos of family vacations at various places around and out of the United States. Moreover, Broad can even be seen wearing designer clothes sometimes on her Instagram.

Furthermore, though Broad does not show it in public, she might be involved in philanthropic works. The gorgeous actress might donate and help raise funds for the welfare of the society and its people, working together with other humanitarian peoples.

Nevertheless, Lindsey Broad’s net worth is helping her enjoy a lavish life that many people worldwide desire. Broad seems to be living her life to her best with her family in New York City, the city of dreams.