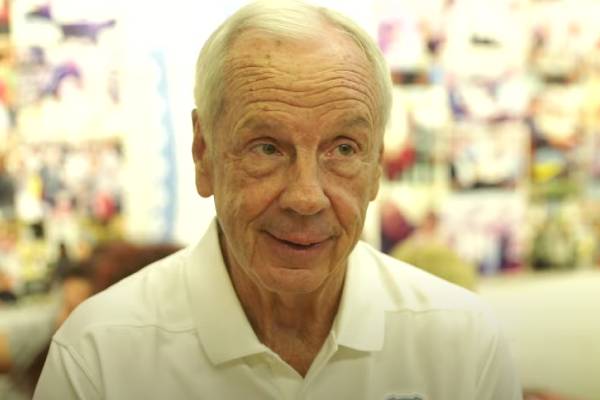 Roy Williams has amassed an impressive fortune from his career as a basketball coach. Image Source: Social Media.

Roy Williams, whose full name is Roy Allen-Theodore Williams, is a former men’s collegiate basketball coach. The coach who served the North Carolina Tar Heels for many seasons announced his retirement in 2021.

Considering his long and successful career, the former coach must have made a remarkable amount of fortune. Now that he has been retired, Williams must be living a comfortable life thanks to his wealth.

So, let’s get to know about Roy Williams’ net worth along with his salary and earnings.

As Celebrity Net Worth estimates, Roy Williams’ net worth is $12 million. As for his salary, the coach got more than $3.9 million for the 2018-2019 contract year from UNC, according to USA Today. Now, let’s break down his earnings and income as a head coach.

Starting his profession in 1973 at Charles D. Owen High School, North Carolina, the 71 years old worked as a coach for 48 years. Roy Williams first worked as an assistant coach for The University of North Carolina for ten years, then became the head coach for the Kansas Jayhawks, where he coached the team for 15 seasons until 2003.

Afterward, Williams returned to UNC as the head coach and stayed with the team until the end of his career. He has won a total of three national championships with a winning rate of .77 percent. Williams is one of the few NCAA Men’s Divison I collegiate basketball coaches to have done so.

Income From Multimedia And Marketing Rights

As a head coach, Roy used to receive a remarkable amount as his payment per year. Aside from his income from coaching, the former head coach earned from multimedia and marketing rights as well.

Williams also received payments from UNC for his appearances on local TV and radio shows with Learfield Communications under UNC’s multimedia and marketing rights contract. Likewise, the former coach got paid through his personal contract with Nike.

Once added, the sum would total up to $3,928,778. Well, considering the former coach’s high winning rate, it is not surprising to know he got paid a heavy amount of money. Roy Williams’ net worth of $12 million is rather well-deserved.

The retired college coach has amassed quite a lot in his extended career. Hence, we can assume he is living a blissful and comfortable life with his wife, Wanda Williams, and his two children, Scott Williams and Kimberly Williams.

The former head coach and his wife own a home of 5,600-square-foot in Berwick Downs, Flat Rock. As per an article from 2012, the house was valued at $1.3 million. However, over the years, the value of the house must have doubled by a lot. It has four bedrooms, six baths, a covered porch with a wood-burning fireplace, a grill, a backyard pool, and a setting for golf.

Moreover, Roy has always been giving back to society. Through donations and fundraisers, he and his wife, Wanda, share their fortune with others. In 2020, the coach donated over $600,000 to fund student-athletes with scholarships as COVID led the seasons to be cut short. Additionally, Williams and his wife donated $3 million to UNC to provide various scholarships to the students last year.

Well, with Roy Williams’ net worth, we don’t see why he wouldn’t want to share his earnings with others for a good cause. Nevertheless, we hope Roy and his family have a happy and comfortable life even in the future.