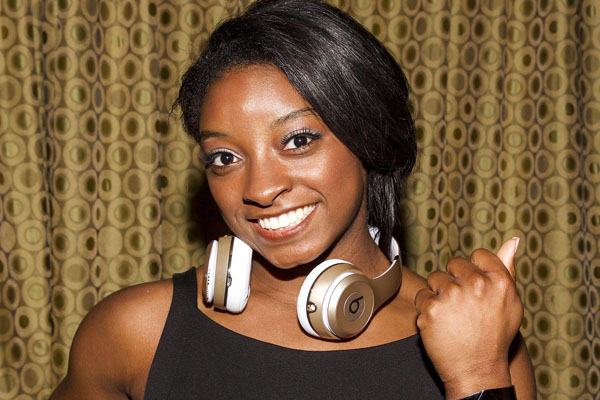 The Olympic medalist, Simone Biles, is not just killing it on the gym floor but in her bank balance too. She has stolen the hearts of millions of gymnastic fans worldwide since she participated in the 2016 Olympic games held in Rio de Janeiro, Brazil. After performing a tough and dangerous vault during the certifying match for the 2020 Olympics in Tokyo, fans are eager to find out more about Biles, including her total net value.

Celebrity Net Worth and other similar sources report that Simone Biles’ net worth is estimated to be around $6 million. So, how has the athlete amassed such a huge amount to her wealth? Let’s find it out all here.

Earnings From Her Olympic Medals

A small portion of Simone Biles’ net worth credit goes to the medals she won from competing in World Championships and Olympics in the past. The flexible athlete Simone Biles started her elite career at the 2011 American Classic in Houston, where she achieved third place all-around.

The following year, a committee headed by gymnastics coach Marta Karolyi named her to the U.S. Junior National Team.

In 2013, Biles got upgraded to senior elite. By 2015, Simone Biles had already won a total of 14 World Championship gold medals. Two years later, Biles was selected to represent her nation, United States, at the Olympics for the first time in 2016. During the summer games, she won one bronze medal and four gold medals.

According to CNBC’s report in 2018, American Olympians get a good sum of money for bringing home the gold or silver or bronze medal. It suggests that Olympians took home $37,500 for each gold medal, $22,500 for each silver medal, and $15,000 for each bronze medal that year.

Moreover, CNBC reports that the figure rose by 50% from the 2016 Games. Nevertheless, Simone might have racked her up at least $100,000 for taking home four gold and a bronze medal in the 2016 Olympics. Moreover, she might make some more solid cash if she succeeds in taking home a few gold medals in the current Olympics.

In addition, Simone Biles also added some dollars, winning some medals from the World Championship. To date, she has participated in five world championships and won 19 golds, 3 silvers, and 3 bronze.

The world champion, Simone Biles, has a range of endorsements with prestigious brands that supplement her gymnastics income.

Some of the biggest companies in which Biles is affiliated at the moment include Athleta, Beats by Dre, Uber Eats, Sk-II, Kellogg’s, GK Elite, Candid Dental, and Hershey’s.

Moreover, Simone Biles was also endorsed by Nike in the past. Reportedly, she announced her sponsorship by Nike via her Twitter account in November 2015. However, she recently left the brand for a new apparel sponsorship with the Gap’s Athleta brand.

According to Athleta’s statement, the Texas native gymnast will have her own performance wear line in this new venture. It will include products for wearing to and from the gym.

So, Simone Biles is accumulating much of her fortune through endorsements and sponsorship deals as well. But, sadly, details of Biles’s contracts with all the above-mentioned brands are not available to the public.

Hopefully, Biles or the brands which endorse her will soon make the amount public so that her fans can know how much she makes from endorsements.

Besides making some money from endorsement deals, and her Olympics medals, Simone Biles earns a substantial amount of money by advertising materials via her Instagram page.

It’s no surprise to most of all that Simone Biles’ Instagram page currently holds 4.7 million followers. So, many advertisers choose her and her social media page to advertise their products.

People can often see Biles rolling out plenty of sponsored content on her Instagram page, including ads for United Airlines, Core Power, Oreo, and many more.

So, in this way, Simone Biles’ net worth credit goes to her insanely famous Instagram page, too, which helps her attract advertisers who pay her hefty sum for advertising their products.

The talented and hard-working athlete, Simone Biles’ net worth of an estimated $6 million is giving her all the luxuries and rich life that she lacked while growing up. Though she spent some of her toddler years in foster care, now she has her own mansion, which she bought from her own earnings.

Moreover, Biles rides in the latest model convertible cars. She might also provide financial help to her parents who adopted her and cared for her.

In 2020, Simone announced via her Instagram page that she had bought a new home in Texas. Moreover, she also showed a few snaps of her new place along with the same announcement.

Unfortunately, not many details on her new residence are available on the internet. But, seeing the pictures, anyone can be clear that it is spacious and luxurious.

the house I grew up in is now up for sale 🏡 lots of amazing memories!someone go buy it ❤️😭
location: Spring Texas https://t.co/Ho96fHqeDB

Furthermore, in 2017, Simone Biles’s brother sold their family home where they grew up. According to Houston Chronicle, the home was traded for between $250K to $285K in December 2017.

So, Simone Biles currently has enough money to enjoy a lavish life and pay all of her valuables’ insurance premiums and taxes. Though her net worth is reportedly $6 million at the moment, that figure could rise even more after the Tokyo Olympics.