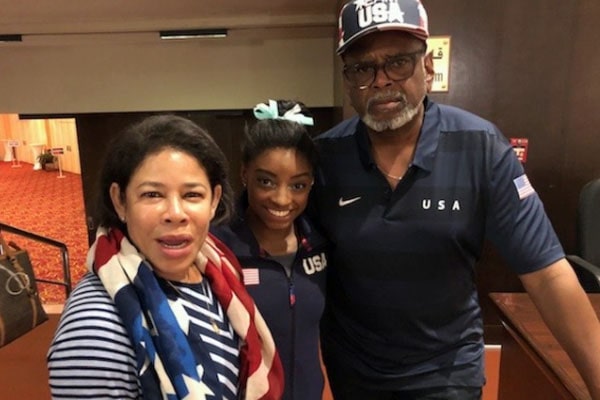 The Olympic gymnast Simone Biles is one of the four kids born to Shanon Biles and Kelvin Clemons in Columbus, Ohio. Despite being born to Shanon and Kelvin, she was raised by her maternal grandparents, Ronald ‘Ron’ Biles, and his second wife, Nellie Ceytano Biles. Mr. and Mrs. Biles adopted Simone in 2003 after she spent most of her toddler years in and out of foster care.

So, since 2003, Ron Biles and Nellie Biles are officially Simone Biles’ parents. Here, let’s get to know more about the Olympic gold medalist’s parents, who played a vital role in making her one of the world’s most dominant gymnasts of all time.

As mentioned above, Simone Biles arrived in this world through mother Shanon Biles and father Kelvin Clemons. However, her biological dad, Kelvin, left her and her three siblings, Adria Biles, Tevin Biles-Thomas, and Ashley Biles-Thomas, soon after her birth.

Moreover, Simone Biles’ biological mother was also struggling with drug and alcohol abuse and was usually in and out of jail. So, she left her kids in foster care.

After adopting Simone Biles, Ron totally restricted Simone’s biological mom, Shanon, from communicating with her and visit her. Ron did so because he thought it was the best thing for Simone at that time, as Shanon was still using drugs. So, Simone Biles never met or talked with her biological mom while growing up.

But, since the past few years, Simone has reconciled with her biological mom, Shanon, who’s been sober since 2007. Though she does not attend her daughter’s games, she watches most of them from the TV in her home in a quiet neighborhood of Ohio.

Similarly, though Simone’s biological dad, Kelvin, who also struggled with addictions, is not in touch with his girl, he also watches her from TV. As a result, both of them feel really proud of their daughter.

Biles’ Credits Her Parents For Saving Her

During an appearance with Dancing with the Stars in 2017, Simone Biles credited her parents, Ron and Nellie, for saving her. She tearfully expressed her gratitude to her mom and dad, who got her out of foster care and always encouraged and aided her to achieve her dream.

Simone said that she never had a mom to run to because her biological mom, Shanon, was a drug addict and was frequently in and out of jail. She added that she still remembers often being hungry and afraid. Though Shanon let Simone struggle in foster care, her grandparents visited her often.


Further explaining about her childhood days, Simone said that her grandpa, now dad, Ron, eventually told her to call Nellie and him mom and dad. And, after some period, they adopted her. In Simone’s words, Ron and Nellie not just adopted her but saved her. In addition, they set a great example of how to treat people, supporting her since day one.

Simone Biles is very thankful towards her grandparents, now her parents. She even often posts her parents’ photos on her Instagram and mentions how much she appreciates them for being a rock of her life.

Initially, Simone’s Mom Struggled To Bond With Her

In Simone vs. Herself, a seven-part docuseries on Facebook Watch, Simone Biles’ mother, Nellie Biles, shared that it was initially tough for her to bond with Simone and her sister, Adria. In addition, it was tough because she was already taking care of two sons of her own, Adam Biles and Ron Biles II.

Nellie added that she knew she had her own barriers as Simone and Adria were not her biological kids. Though she did everything that’s nurturing, mothering, she still had to be there 100%. During the talk, Nellie remembered praying for the mother-daughter bonding.

But, gradually, she started feeling that she would do anything for her adoptive daughters and would die for them. And, when that feeling came, she realized that she truly became their mother.

The young and flexible Simone Biles’ parents, Ron and Nellie Biles own a gymnastic center in Spring, Texas. And, their champion daughter, Simone, is a trainer at their 56,000 square feet gym, aptly named World Champions Center. Their gym center offers a wide variety of training and classes for all ages and levels.

Similarly, the center aims to provide a healthy, safe, and fun environment to uplift each individual to achieve their maximum potential. Ron and Nellie’s gym center has helped their daughter, Simone, excel in her gymnastic career and inspire thousands of kids and youths.

So, though Ron and Nellie Biles did not give birth to Simone Biles, they love her the same way as they love their biological kids. They are bursting with pride over the way their daughter is excelling in her career and making them glad for their upbringing.