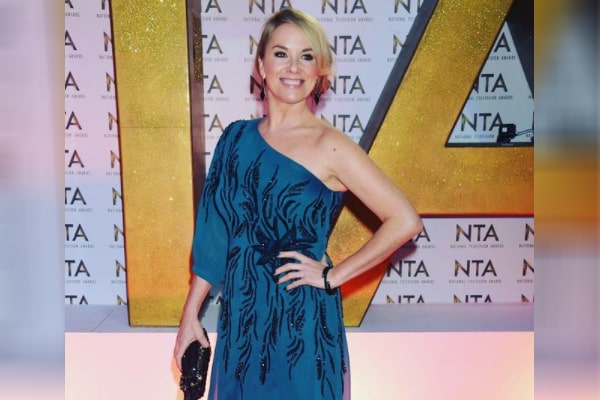 Britains sweetheart Tamzin Outhwaite became widely famous for her foxy portrayal of EastEnders Mel Owen. Although becoming a regular face in BBC shows, the 50-year-old is mostly popular with the British audience rather than the worldwide masses.

The back-to-back winner of the British Soap Award for the Sexiest Female has been contributing for almost 30 years to the industry. Previously married to Lucifer actor Tom Ellis, Tamzin Outhwaite’s net worth is estimated to be $8 million.

As the EastEnders star is well known for her TV series/show rather than her big-screen appearances, let us look at the sources that add to Tamzin Outhwaite’s net worth.

The British actress other than EastEnders is known for her roles at Red Cap, Vital Signs, Hotel Babylon, and New Tricks, to name a few. Credited for her appearance in more than 20 television shows, mostly for BBC, the 5′ 8″ actress may have had a hefty paycheck.

Although British-based shows are very discreet with their behind-the-scenes because of partiality, we have minimal information regarding how much stars earn. Whereas for EastEnders, female actors are rumored to earn around $206,385 and $275,178 yearly, which is less than the male actors.

Knowing that Tamzin made her breakout during the 90s, we can assume that she might have earned something similar to the above-mentioned amount or maybe even less. Nonetheless, with so much involvement in the small screens, it sure raised Tamzin Outhwaite’s net worth.

Earnings From The Big Screen

The BBC regular may have had a major impact on the national television scenario but has also been part of a handful of movies. Bestowing movies only with her star power rather than her performance, the London native’s Hollywood dream was short-lived.

The mother of two only had one box office appearance for the movie “Great Expectations,” where she starred alongside the talented Ralph Fiennes and Sally Hawkins in a minor role. Earning a total of just $203.9K globally, we can assume it contributed to Tamzin’s fortune in a small fashion.

Other than that, the TV actress has appeared mostly on feature films of the shows she has been part of and has a couple of post-production work slated to release in the upcoming months.

Many actors drift away after getting the spotlight on the big screen. Things are different with the Yoga-loving Outhwaite as she always stuck to her roots as a theatre actor.

The one hit box office wonderer is an active member in this form of art considered by many as the purest nature of acting. Like the British TV personals, the theatre studios also keep things to themselves, providing general information. The average salary for a theatre artist is said to be around £32,500.

Since the Red Cap actress last appeared as recently as February of 2021, we can estimate that she might be earning around a similar amount mentioned earlier. Teaming up with one of her closest friends Denise van Outen for an upcoming play, it looks certain that the Mel Owen actress is so far from done with the theatre industry.

Apart from the entertainment business, Tamzin Outhwaite’s net worth is assembled from many other sources. The theatre actress has a following of 293k on her Instagram and can be seen promoting various businesses.

The Sylvia Young Theatre School graduate has links to Red Production Company and Country Idyll in her bio, followed by a couple of streaming sites of BBC and MasterPiece PBS. We are not sure regarding the exact number the talented actress might be earning, but since she has mentioned it in her bio, we can only assume it might be filling her pockets.

The natural-born blonde is also the brand ambassador of Design Havens For Heroes, an art studio that sells different artistic works mostly home decors and clothing apparel. Tamzin has also made herself available to be booked for various events linking herself with online sites like NMPlive UK and Booking Agent Info.

An average amount earned by becoming part of such events is usually $92,185 to $103,192. We can assume that the former wife of the devil himself is doing fine from her other ventures, excluding the acting department.

Divorcing back in 2014, the bold and beautiful star had her world upside down only recovering after a couple of years. As stated earlier, she was previously married to the equally talented Welsh actor; Tom Ellis who has an estimated networth of around $6 million.

Many sources have confirmed, the Lucifer star has never failed in paying the legal child support for their two daughters. In one instance even, winning damages over Sunday Mirror as the newspaper falsely claiming him of not paying for the child’s maintenance.

Currently, both Florence Elsie Ellis and Marnie Mae Ellis, 12 & 8 respectively are kids and their devil dad is still said to be paying the required amount for their support as claimed by their mother, Tamzin.

With almost 30 years in the industry, the 1999 National Television Award Winner for Most Popular New Comer sure has a lot to her assets. Except for her flashy wardrobes and jewelry, the fitness enthusiast has a $2.4M house with a huge garden.

Since Tamzin also is a huge spiritual believer, her house’s aesthetics are also planned and arranged very properly. The five-bed home has an upcycling bathroom sink, zen den, landscaping yard, and many objects of positivity. The garden is also very spacious, including a huge swing set for the star’s two daughters.

The New Tricks actress’s most exquisite purchase might be her $16K ‘igloo’ sauna, following David Beckham and Guy Ritchie’s footsteps, who also have the sauna from the Estonian company Iglucraft. The trendy steam bath has a double sauna and is situated in her garden.

Outhwaite Selling Her Assets To Pay Her Mortgage?

The multiple award-winning actress, like many others, was affected financially by the coronavirus pandemic. So much so that the 90’s debutant revealed selling her assets as her acting work dried up due to the virus.

On the Irregular B*tches podcast, she mentioned –

“I’m at the moment where I have started to sell my stuff, either bought or created and don’t need anymore. Clothing, home things. ‘I think that’s probably how I can pay my mortgage and manage for a while until the industry comes back.”

The 50-year-old star may have had some difficulties during the pandemic but is bouncing back to her regular self. Tamzin Outhwaite’s net worth is around $8 million, and she has to keep herself busy to reach similar amounts.

We wish our best to Tamzin Outhwaite for her future endeavors and always be a happy mother enjoying life to her fullest, as shown in her social media.

Dave Roberts Net Worth – How Much Is His Salary As A Baseball Manager?