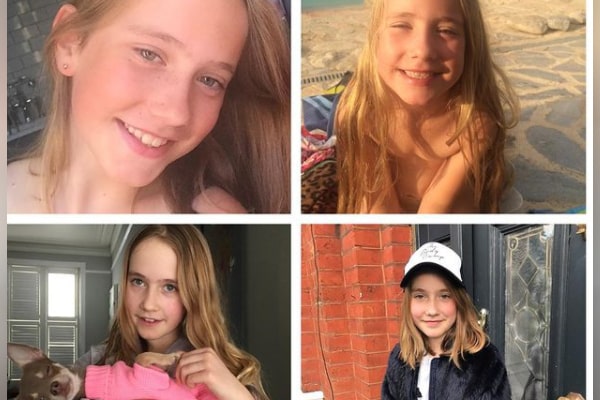 Tom Ellis, the Lucifer star and the devil himself, has always been tagged as “the hot stuff” by the general masses. Renowned for his portrayal as Lucifer in the TV series of the same name, the Welsh actor is no stranger when it comes to the ladies.

Married previously to the equally foxy, EastEnders star; Tamzin Outhwaite, the couple has two children together.

Florence Elsie Ellis, Tamzin Outhwaite’s daughter with Tom Ellis is their first out of the two. Sister to Marnie Mae Ellis, the 12-year-old Florence was heavily surrounded by media attention during her birth.

As both of Florence’s star parents often post on social media about their children, let us have a look into what we know of their firstborn.

As we have mentioned above, Florence is the first child out of the two of the 6′ 3″ actor with Tamzin. Born on 17th of June, 2008 in London is where the VIP child spent most of her upbringing.

Just one year away from becoming a teenager, Florence isn’t as open as her parents or as her sister; Marnie Mae Ellis who can be seen ofter in their parent’s social media feeds.

Florence Has An Elder Half-Sister

Although Florence and her younger sister Marnie Mae Ellis are the daughters of the army drama Red Cap actress, the London-born has an elder half-sister as well.

Nora Ellis, 15, is the Lucifer star’s first daughter from his previous relationship with Welsh theatre actress; Estelle Morgan. Despite sharing the half-sibling relationship, the lowkey Nora Ellis has mutual feelings for both Florence and Marnie. Considering the fact that they live separately and had different nurturing, they still make time for each other, especially for their 42-year-old dad.

Both Tamzin Outhwaite’s daughter with Tom Ellis are active faces on their social media as the celebrity parents post often. Marnie being the youngest, is the most featured for her shenanigans, whereas, for Florence, she tries to keep herself out from the camera sight.

This is one of the reasons why there are very minimal details regarding what the almost teenagers’ hobbies and interests are. As for Tom’s, other daughters; Nora Ellis, is into singing and her half-sister Marnie Mae Ellis is into acting.

Tamzin Once Spoke Of Her Interest

Florence may appear on her award-winning parent’s social media often, but they hardly show what she is really into. There has only been a couple of instances where the 50-year-old actress has revealed her daughter’s interest.

One such was when the back-to-back British Soap Award Winner for Sexiest Female tweeted how her firstborn was dancing in the kitchen with her tap shoes on. Looking into that statement from 2010, we can assume that Florence may have an interest in tap dancing.

florence elsie ellis is dancing in the kitchen with her tap shoes on.the meaning of life?

Also, one wouldn’t ask their parent to buy something specific like a tap shoe if they weren’t interested in it.

Florence Has 4 Mother And Father Figures

Despite the London-raised child’s parents separating after a healthy 8 years of marriage, she and her sister; Marnie spend time with both the stars equally. Both Tamzin Outhwaite’s daughters with Tom Ellis have accepted their parents and can be seen bonding perfectly.

Currently, Florence’s mother Tamzin Outhwaite is dating Tom Child, who is 20-year-old younger than her. Whereas Hollywood’s heart-throb, and Florence’s father, Tom Ellis is married to screenwriter Meaghan Oppenheimer.

Even with such circumstances, Florence and her sister are able to have a quality childhood with enough care and attention.

Unlike Florence’s Lord of Hell dad, her mother Tamzin Outhwaite is asked by her daughters not to marry again. For reasons undisclosed, both the London residents are not on the same board with their mom marrying her current boyfriend, Tom Child.

In an interview, the British actress mentioned

“They always say, “You two are marrying”. They don’t like the idea but it’s ok since we are not desperate. I feel like we already share a relationship like those of the married ones”.

Although the EastEnder star appreciates her current partner, she would never disagree with her kids. Only time will tell if the 29-year-old who has already moved into his partner’s place with her children is completely ok with the decision.

As Tamzin Outhwaite’s daughter, Florence Elsie Ellis, is very private regarding her personal traits, we have no idea if she will follow in the footsteps of her star parents or not.

Only a couple of months away from being a teenager, the discreet star child has all the support from her family no matter what career path she finds fitting for her.

With all that being said, we only hope the best for the young Florence to prosper in her life, similar to her talented parents.

The name Florence is a very feminine English name that means prosperous or flowering. Although the name is highly inspired by Florence Nightingale, it is of Latin origin.