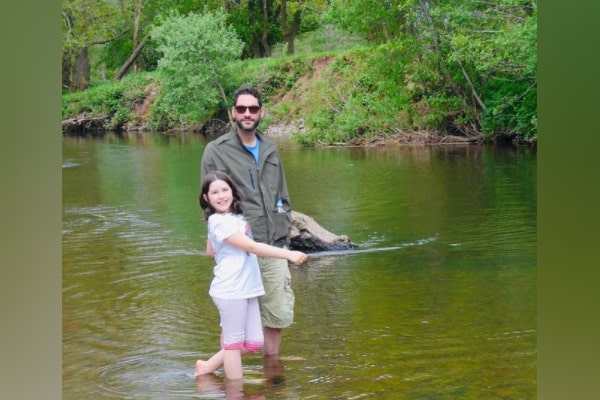 Our favorite demon, the Welsh actor, Tom Ellis became popularly known for playing Lucifer. Gathering more mainstream popularity after Netflix bought the show rights, the Lucifer star currently has a massive fan following. Although considered by many as a Hollywood Idol, the 42-year-old isn’t absent for his dad duties.

Being a ladies man himself, the talented star has 3 kids, all daughters. Tom Ellis’ eldest daughter Nora Ellis though is the one closest to him and for many reasons.

With that being said, let us look into the eldest daughter in the family of the handsome hunk, Tom Ellis.

As mentioned above, Nora Ellis is Tom Ellis’s eldest daughter out of three. The 15-year-old herself is an Instagram star with thousands of followers and is one talented kid. Although she is the daughter of the popular TV star, she keeps herself very dormant from all mainstream media. Only appearing once in a while in the officialtomellis; Tom Ellis’ Instagram account with 8.7 million followers.

Though she may be the oldest, she is not the only daughter of the award-winning actor. The Devil’s firstborn is also the half-sister to Florence Elsie Ellis and Marnie Mae Ellis.

Nora is Tom and Estelle’s Child

Currently married to Meaghan Oppenheimer. the Lucifer star has had his fair share of women. Nora on the other hand is from Tom’s former partner; Estelle Morgan, who also is a Welsh actress best known for her movie “Amazing Grace“.

With the pair going their separate ways and as being the popular actor’s first daughter, we can assume that as one of the reasons to why the Hollywood heart-throb is close with Nora. Tom Ellis’ other daughters; Florence and Marnie are with his ex-wife Tamzin Outhwaite.

Nora Ellis might be in her mid-teens but has already established herself as an artist, out shadowing the fact that she is Tom Ellis’ daughter. The talented girl is happy with how things are and can be seen handling herself perfectly as she continues to explore around.

As she is very lowkey and enjoys the fact that she is not targeted by the spotlight, let us see a couple of Nora’s interests and hobbies.

Looking into her story highlights on Instagram we can see how much of an animal lover, the pretty girl seems to be. Lucifer’s eldest mini demon has no particular taste when it comes to petting an animal. Estelle’s daughter enjoys sharing videos and pictures of dogs, rabbits, and cats with their silly behavior.

She Has High Passion For Singing

Unlike the present generation teenagers who are into the new this and that, Nora seems to enjoy the old bits. Her playlist seems mostly to have old classics considering she was born in 2005.

Highly influenced by The Beatles, Anita Ward, Stevie Wonder. Dean Martin, and Nina Simone, the firstborn of the Amazing Grace actress also has an interest in singing. So much so, she has a whole YouTube channel dedicated to her singing.

Tom Ellis’s daughter Nora, might have some mainstream attention by being tagged with “Ellis”, but respects her mother equally. Regarding that, the former pair’s daughter’s YouTube channel is called Nora Ellis-Morgan.

The channel has 1.73k subscribers with just 3 uploads up to date. Nora as mentioned in the above paragraphs shows her admiration for the classic songs as she is into covering them.

As the last upload is dated back 5 months ago, we can say that the former Welsh couple’s daughter isn’t a typical YouTuber. The sister of Marnie Ellis and Florence Ellis also isn’t seen promoting her channel as her most viewed video has a total of 5.7k views.

Love For The Demon Dad

All of Tom Ellis’ daughters love him, considering the fact that he is just not only good with stealing souls and fighting angels but also with women.

Despite his ex-wife; Tamzin Outhwaite can be seen, bashing the Lucifer star on various social media platforms and interviews now and then, the handsome actor isn’t bothered. The winner of the 2000 British Soap Award for The Sexiest Female even credits her new man for looking after her 2 daughters; Florence Elsie Ellis & Marmie Mae Ellis.

The fact that the Devil actor is separated from his later daughters, he can give more time to his firstborn. Though respecting the fact that his teenage daughter is old enough to decide what she wants to do, Tom has always got her back.

Away from all the unwanted publicity and media attention, Nora Ellis is enjoying a simple life. The 5’3″ star child isn’t seen flexing around in her social media as her Instagram mostly consists of mirror selfies rather than photoshoots.

In the future, it is up to the Instagram star to decide whether she wants to follow a similar career path as her acting parents or be whoever she wants to be. Only time will tell us.

The meaning of the name Nora is very feminine as it means “lights” in Irish origin. Whereas, the Anglo-Norman version of the name is originated from Honora with which honor in Latin.