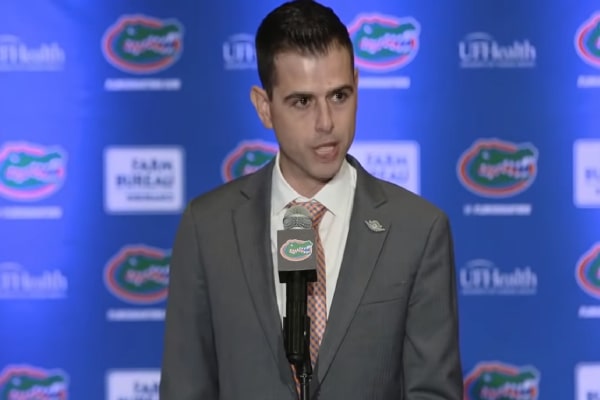 The renowned basketball coach Todd Golden born Todd Raymond Golden, currently serves Florida Gators MBB. The University of Florida hired him as their new coach on 18 March 2022. Before that, the basketball professional worked for the San Francisco Dons as their head coach. In addition, he is also a former basketball player of Maccabi Haifa.

During a long and glorious professional career, he must have earned enormously. Thus, in today’s article, let’s learn about Todd Golden’s net worth and earning sources.

Being a retired basketball player and having served as an assistant and a head coach, the Arizona native must have made a remarkable fortune. Hence, Todd Golden’s net worth is mainly benefited by his earnings as a coach.

So now, let’s break down his basketball earnings, salary, and income sources in detail.

Todd was born and grew up in Phoenix, Arizona. He went to Sunnyslope High School and graduated in 2003. During his time at the high school, he played basketball and baseball. In addition, Golden helped his team win the 2002 Arizona 4A state championship in basketball.

The athlete then enrolled at Saint Mary’s College of California in 2003 and continued his playing career. The guard competed for the Saint Mary’s Gaels from 2004 to 2008. He also guided the Gaels to make the 2005 and 2008 NCAA Tournaments appearances. After ending his collegiate career, Todd played for Maccabi Haifa in the Israeli Basketball Premier League for two seasons (2008-2010).

Within two seasons, the coach played 22 games and averaged 2.2 points. Also, the Saint Mary’s graduate competed in the 2009 Maccabiah Games with the USA Open Team. As per Jose Colorado, the average pay of a foreign basketball player ranges from $140,000 to $350,000 per annum in the Israeli League. Therefore, Todd Golden’s salary must have been significant.

Although the Arizona native had a short playing career, he seems to have made a considerable sum as a player.

After ending his playing career, the basketball star worked in the private sector in advertising sales for about two years. He was rising fast in the job and making a six-figure salary. But the former sportsman felt something was missing. In an interview with 247Sports, he said he didn’t enjoy going to work and felt tired of fighting off his true passion, i.e., basketball.

Thus after just two years, Golden quit and took an assistant coaching job at Columbia University for less than half his previous salary. He then became a director of basketball operations at Auburn Tigers under the head coach Bruce Pearl, who had coached him during the 2009 Maccabiah Games.

Eventually, Todd landed his first head coaching job on 1 April 2019 as San Francisco Dons 20th head coach. But before that, he served the team as their assistant coach for two seasons, from 2017 to 2019.

Todd Golden, formerly the head coach of San Francisco, will be the next Head Basketball Coach at the University of Florida.

Additionally, the talented basketball coach might get incentives and bonuses for achieving different goals and milestones. Hopefully, he will continue to accomplish great success in his career and becomes even more affluent in the coming days.

As mentioned above, Todd Golden’s net worth is a notable sum. Therefore, the coach and his family must live a comfortable lifestyle. He lives with his beautiful spouse, Megan York Golden, and two adorable kids, a son and a daughter.

Moreover, the successful coach must have spent a significant amount on real estate and other properties. Considering his net worth and salary, Todd might have bought branded cars.

Nevertheless, the Florida Gators head coach’s professional career is flourishing, and he is establishing himself as one of the best coaching figures in the league. In addition, he seems to have collected a hefty fortune in his career and is living comfortably with his family. We wish him a more prosperous life ahead.