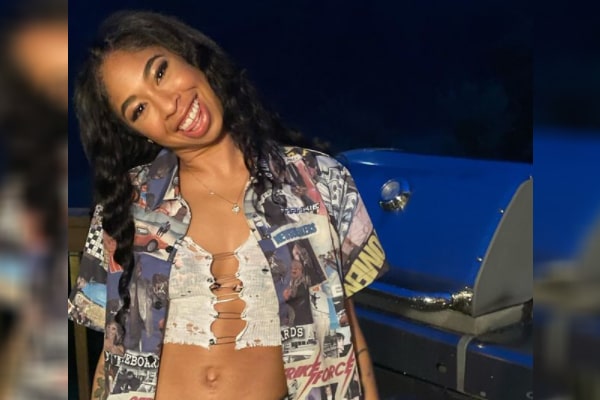 Alex Martin, born as Alexandrea Martin, comes from a background in Hollywood. The actress and comedian Whoopi Goldberg‘s daughter, Alex Martin, is an actress and film producer awarded Miss Golden Globe’s title in 1994. Born to Whoopi and her first husband, Alvin Martin, she was with a child at a very young age from her high-school fling.

Well, Alex Martin is now a mother of three beautiful kids; Amarah Skye, Jerzey, and Mason. But we are here to discuss about the oldest one in the family, Amarah Dean. She was born to Alex Martin’s high school fling, who was later wholly abandoned after going to jail at a young age. Therefore, let’s get to know more about Alex Martin’s daughter, Amarah Dean, and her whereabouts.

Aforementioned, Whoopi Goldberg’s daughter, Alex Martin, was with child at a very young age by a half Vietnamese and half black high school fling. She gave birth to her very first baby, Amarah Dean, at the age of 16. Unfortunately, details about Amarah Dean’s father are still a mystery, but she has taken the last name of her stepfather, Bernard Dean.

Reportedly, Alex Martin’s parents decided to abandoned Amarah Dean’s biological father after he went to jail at a young age. The young couple had first met when she lived in Berkeley. Well, life is all about ups and downs, and Alex Martin’s daughter had one too. Although there aren’t much of her father’s whereabouts, Amarah seems to have a strong bond with her mother. Moreover, her uncanny resemblance with grandmother, Whoopi, and their birthdays on November 13. they were bound to have a strong bond.

Alex Martin’s kid, Amarah, is very active on social media and shares her time with her parents and grandparents. Furthermore, she seems to be into paints and brushes and commercialized it through a clothing line. According to Alex’s Insta post, her firstborn made some original hand-painted jackets and sold them.

Amarah Skye Dean Is An Artist

Aforementioned, Alex Martin’s daughter Amarah Skye seems to have picked interest in painting. She makes original hand-painted jackets and sells them. Although we could not find any social media for the jackets, we did see her website.

Amarah is a prolific artist who loves to express herself through colors and illustrations. Furthermore, there are a few pieces on her website, which are listed below with their prices.

Interestingly, Amarah’s work named Untitled 1, which is $1200, seems to have great value. Although there isn’t much detail about her career, she indeed remained away from the entertainment industry. However, she did appear on the show called According to Alex a couple of times. Alex Martin’s daughter is a vibrant person and has a charming personality. Thus, success isn’t far from the horizon for Amarah Skye Dean. Matter of time, and we might as well see her works featured in some high-end art magazine.

Until then, let’s look into her relationship with her half-siblings, Jerzey and Mason.

Two Half Siblings From Martin’s Marriage With Bernard Dean

As stated earlier, Amarah Skye Dean’s mother, Alex Martin, is a proud mother of three kids, two daughters, and a son. Well, Alex’s fans have heard about three marriages with the same man, Bernard Dean. The couple welcomed two kids from their wedding, a daughter, Jerzey Dean, and a son, Mason Dean.

The youngest in the family, Mason Dean, has turned 20 recently; thus, one can only appreciate Martin’s family’s time and strength with the passing time. Furthermore, all three siblings seem to share a strong bond. Moreover, Martin’s daughter, Amarah Dean, often shares moments of them via her Instagram.

Moreover, it is not only Amarah who inherited her granny Whoopi’s healthy genes. Her younger half-sibling, Jerzey Dean, also has a strong resemblance with her granny. Despite the differences, Amarah, Jerzey, and Mason are closely tied together and support one another.

Besides being Alex Martin’s daughter and Whoopi Goldberg’s granddaughter, Amarah is herself a child’s mother. Thus, let’s move on with her relationship and motherhood from here on.

Tragedy never fails to surprise humans as it may appear in whatever form. For Alex Martin’s baby girl, it seemed like her loved ones’ passing. While going through her Instagram, we happened to stumble on this heartbreaking RIP post for her partner, Wykil Sherrod, who passed away on 10 April 2019.

Amarah posted a couple of pictures and videos of them vibing together with a heartwarming goodbye. She wrote ‘Rest in Paradise’ and felt robbed off of her love too soon. She wished him to be beside her and promised never to forget the love they had. The last time Amarah Skye’s former partner posted on his Instagram was on 7 April 2020 with the caption ‘I pray I go to heaven. The heart turns cold no pretending.’

Mother Of A Daughter

As the oldest sibling, Amarah Skye must have had a taste of motherhood from a very young age. However, in 2014, she gained the true essence of it as she birthed her own child, Charlie Rose on 15 March 2014.

Amarah’s grandmother, Whoopi, couldn’t contain her happiness and posted a video while feeding her great-granddaughter, Charlie. She looked ecstatic to have welcomed the new addition to the family.

Amarah Skye Dean’s daughter, Charlie Rose, is slowly growing with all the love and affection she could gather from her maternal and paternal family. As for her father, he is equally involved in her life. Although she and her former partner have parted ways, they still co-parent their only child.

Furthermore, Charlie’s grandmother, Alex Martin, is very proud of her and makes several posts about her. Well, Alex Martin’s daughter, Amarah Skye Dean, has made significant achievements until today and continues to create a legacy for her offsprings. Therefore, let’s hope to hear more of her and her babies in the coming days.

The name Amarah means unfading flower and has an old Greek origin.