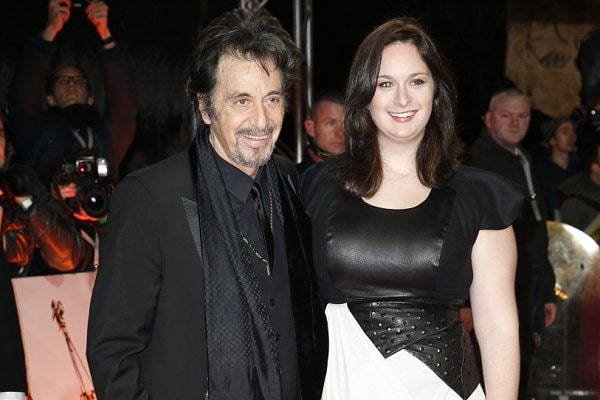 Alfredo James Pacino, aka Al Pacino, is one of the greatest actors and filmmakers. In a career spanning over five decades, Pacino has starred in several award-winning movies and nominations, including Academy Award, Primetime Emmy Awards, etc.

Although The Godfather star achieved many awards and made a remarkable history, he is a bachelor dad of three children. And, for now, we shall be tailing his eldest daughter, Julie Marie Pacino, who also follows her father’s footsteps. So, let’s go.

Aforementioned, Al Pacino is a bachelor. However, he has three children. His eldest, Julie Marie Pacino, was born from his relationship with his acting teacher, Jan Tarrant.

Julie Pacino’s parents dated back in the 80s and separated shortly after. Born on October 16, 1989, Al Pacino’s daughter Julie grew up fascinated with the cameras and film making process. Growing up in New York, she graduated from NYFA.

Although there is not much about Al Pacino’s daughter, Julie Pacino’s childhood, she must have been surrounded by filmmaking equipment and all. Furthermore, considering her close relationship with her father, they must have shared a fair amount of time.

Likewise, Julie Pacino seems to be secretive and rarely posts any pictures of her on Instagram. She posts photos of the sceneries and throwback pictures. Hence, Julie Pacino’s relationship status is unknown.

As stated above, Al Pacino’s daughter, Julie, is not his only child. She has two beautiful twin siblings from her father’s second relationship with actress Beverly D’Angelo. The pair welcomed their children, Anton James Pacino and Olivia Pacino, on January 25, 2001, at L.A.’s Cedars-Sinai Medical Center.

As of now, both Julie Pacino’s half-siblings have grown up into exceptional humans. Julie is also very close to them.

Besides being Al Pacino’s daughter, Julie Marie Pacino has managed to become a reputable name in the entertainment industry. As mentioned above, she was always fascinated with filmmaking as a child and thus chose it as a career.

Presently, Julie Pacino has produced and directed over ten movies and documentaries which are critically acclaimed. Likewise, she is also the founder of Tiny Apples.

Pacino’s daughter debuted her producer career via a feature film called ‘Billy Bates.’ From that point on, she has written and directed several short films that were screened in several cities across the world.

Some of Julie Pacino’s notable works are Nadia Jaan, The Greatest Night, Shifting Past, Nowhere to Go, etc.

Besides owning her own production house, Julie also co-founded Poverty Row Entertainment with producer, Jennifer DeLia. The creative-duo met in Austin in 2009, and after sharing some of their creative flow on a project, they decided to start their own company.

Moreover, Julie’s first directorial debut movie, Billy Bates, was made around this time.  As of now, they are still partners and work on different projects. Well with such different endeavors, one can expect Julie Marie Pacino’s net worth to be of a commendable sum. As for her father, Al Pacino has an estimated net worth of $130 million.

Julie Pacino’s interest in film-making sparked at a young age when her parents handed her a camera. However, she consciously chooses not to be overshadowed by her father’s name and grew up with perspective. Furthermore, Julie’s mother made her understood that she wasn’t entitled to any facilities because of her father, the great Al Pacino.

Hence, here she is, Julie Marie Pacino, working hard as ever and making her own films making herself shine as bright as her father. Let’s hope the quest for success continues.

The name Julie is of French origin, which means youthful or downy. Likewise, Marie is also a french form of the biblical name Maria which means “beloved,” “sea of bitterness,” “rebelliousness,” and “wished-for child.”