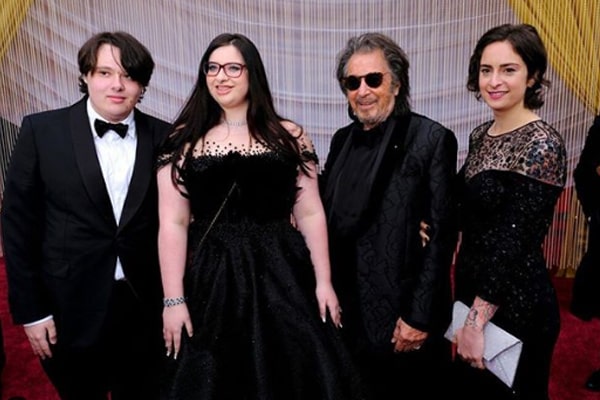 Al Pacino's twin children spent most of their life away from the approach of the public scrutiny. Image Source: Olivia's Instagram.

Al Pacino is an iconic name in Hollywood, as he has been involved in the industry for over five decades. Exclusively known for his phenomenal performance in The Godfather, Pacino debuted with a minor role in Me, Natalie, and went on to receive some notable nominations and awards, including  Academy Award, two Tony Awards, etc.

Al Pacino’s perseverance made him one of the greatest in the movie world and garnered millions of fans worldwide. However, he decided to live a bachelor’s life but is a father to three adorable children from his previous relationships. Today, we will be talking about Al Pacino’s twin children, Anton James Pacino, and Olivia Pacino, with his ex-girlfriend, Beverly D’Angelo.

The acting legend Al Pacino and his former girlfriend, Beverly D’Angelo, welcomed their adorable children, Olivia and Anton, on January 25, 2001. In an interview, Beverly revealed that after three months of knowing one another, Pacino told her that he wanted to have babies with her. And that’s all she had to know.

Pacino’s former partner welcomed her babies at the age of 49 at L.A.’s Cedars-Sinai Medical Center. The pair conceived their children via Vitro fertilization, and both weighed in at just more than 5lbs.

Both Al Pacino and Beverly were thrilled to welcome their pretty children, but eventually, fate came into play, and the pair had to go through some rough patches like a messy custody battle.

Pacino and D’Angelo Had A Custody Battle

The acting couple went through some messy custody battle as they were experiencing lows in their relationship. Al Pacino’s twin children had lifted his life or changed his life for good and wanted to be present in their lives.

However, Olivia and Anton Pacino’s father, Al Pacino, had to file a suit in the family court seeking joint custody and liberal visitation rights from the twin’s mother, Beverly.

Although the custody battle made their relationship a little bit rocket, they eventually settled down for co-parenting. They nurtured their children together, and father Pacino was present in most parts of his twin children’s lives.

Pacino and his daughter, Olivia, seem significantly close to one another as she follows their father on the red carpets and all. Although Pacino never wedded, he became a huge father and mastered the art of co-parenting with his former partner, Beverly.

Aforementioned, the acting legend was present in most of their children’s lives. Thus, his presence must have had it’s a toll on his daughter, Olivia Pacino, as she is an emerging actress herself.

As a member of Pacino family, she had to be influenced by her actress mother and Pacino himself. Although she is just 19 years old, we might see her more often on the big screen in the future. Besides claiming to be an actor via her Instagram bio, she seems to love exploring new places.

Again, from Olivia Pacino’s Instagram, she marked five countries out of 195 and looked forward to setting foot on every country possible. Well, that’s ambitious, and being ambitious is what makes life worthy of living.

Dick Tracy star, Al Pacino’s daughter, has grown up into a beautiful person and has already found love at the age of 19. She does not hesitate to share her love interest via social media and is a proud girlfriend.

Furthermore, Olivia Pacino’s boyfriend seems to be into music production and has been doing it for quite a while. He goes by ‘NoName,’ and his Instagram handle plus website are under the same name.

It looks like the young couple has been dating for little over a year now as Olivia posted a congratulatory/anniversary kind of post on May 4.

Unlike Pacino’s daughter, Anton James Pacino seems to prefer a private life, which is why he isn’t available in any form of social media. The acting legends made sure their children were away from the reach of the paparazzi and ensured their childhood to be healthy.

However, Anton seems to prioritize privacy even today. Although he appears on a few events with his father and sister, he isn’t out in public making headlines yet. Unlike his sister, we still don’t know about Anton’s whereabouts, but we sure do know that he is a high school grad and rocking his life in private.

Let’s hope we will get a glimpse of this handsome young one in the future.

Olivia Pacino Had Difficulty Reading While Anton Was A Smooth Learner

Although Al Pacino’s twin children look incredibly good, they still did have a little challenge. It made his former partner Beverly search for alternatives.

Pacino and D’Angelo’s daughter, Olivia, had difficulty reading. The normal-schooling was a little tacky for the young girl, while her twin sibling, Anton, was a smooth learner. Hence, the problem brought conflict within Olivia, and she had to feel like a competition of being as able as her brother and learn the way other students did.

However, Olivia’s mother, Beverly, realized she was more of a visual learner and found out the new approach of education, i.e., Fusion. The personalized environment in the education facility was excellent for Pacino and D’Angelo’s daughter.

Hence, Olivia graduated from the Fusion Academy Miracle Mile in May 2019. There is no happiness to a parent than to witness their child grow exponentially, and Beverly was proud of her daughter.

Unfortunately, we still don’t know about Al Pacino’s son, as he is yet to make his debut on social media. Let’s patiently wait for the day until he decides to come out to the world. Or he could have a social media and is just not ready to reveal it to the outer world yet.

Aforementioned, Al Pacino is a bachelor, but he is the father of three children. He welcomed his eldest daughter, Julie Marie Pacino, with acting coach Jan Tarrant in 1989. The pair separated shortly after, but Pacino was always present in his daughter’s life.

As a daughter of an acting coach and the acting legend, their daughter, Julie Pacino, decided to enter into the world of the directory. As of now, she is an aspiring director and founder of a production house called Tiny Apple.

When it comes to her privacy, Julie is as secretive as her half-twin sibling Anton; thus, there is not much about her. But all three siblings share a great siblings bond and spend time together when time allows.

The name Olivia is of Latin origin, which means olive or olive tree.

Likewise, the name Anton is of ancient Greek origin, which means priceless and valuable. Similarly, James is of Hebrew root, which means Supplanter.