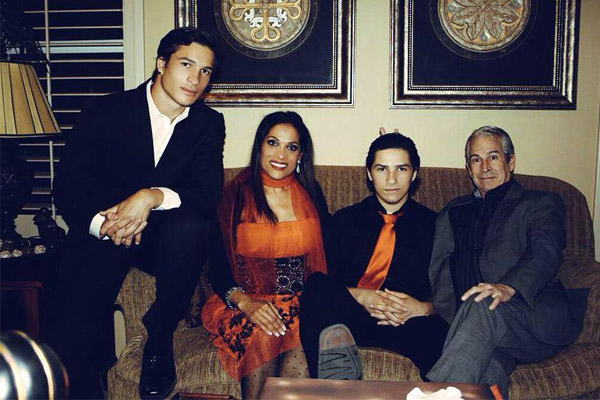 The daughter of the boxing legend late Muhammad Ali, Rasheda Ali, is an internally famous author, advocate, and spokesperson. With the motivation of her kids and father, who had Parkinson’s disease, Ali works as an advocate of stem cell research. She travels around the world, raising awareness and collecting funds for the families suffering from Neuro-Cognitive disorders.

Talking about the family life of Rasheda Ali, she is a proud mother to two sons with her husband, Bob Walsh. Today in this article, indulge yourself in some facts that we are mentioning about one of Rasheda Ali’s son, Nico Ali Walsh. And, get to be familiar with the name you might hear more in the coming years.

Over a few years, Rasheda Ali’s son, Nico Ali Walsh, is gaining popularity in the media as the newest star of the famous Ali Family. Walsh is making headlines for his incredible in the ring skill that he inherited from his greatest grandfather, Muhammad Ali. He occasionally floats like a butterfly and stings like a bee in a boxing ring.

I’m blessed to announce that I’ve officially turned professional in boxing. I’m very excited for what my team and I have planned for the future and thank you to everyone for getting me to this point. My pro debut will be at the end of this year. #boxing #training #Alhamdulillah pic.twitter.com/poORQOvY6m

Although Nico Ali Walsh began boxing since his early days, he officially turned into a professional boxer in 2020. Walsh announced his excitement of being a pro-boxer via his official Twitter page on 7 March 2020.

Nico Ali’s mother, Rasheda, did not want her son to be in this fighting game. However, he continues his passion for boxing, and there, now he succeeds in establishing himself as a professional boxer.

Moreover, Nico made his professional debut in the ring wearing his grandfather’s white trunks. He won his debut match against Jordan Weeks by technical knockout. Having a part of his granddad inside the ring was a big motivation for the young boxer.

Also, with his debut in the professional boxing scene, there is no doubt that Rasheda Ali’s son, Nico will continue to shine light on the family name.

Nico Carries On His Grandpa’s Legacy Of Service

Nico Ali Walsh does not only carry his grandpa, Muhammad Ali’s legacy, in the boxing ring, but he has also inherited Ali’s philanthropic nature too.

Back in 2018, Nico and Ali’s family teamed in an event with Christmas Without Cancer Organization to help families affected by cancer. In the proceeding, Nico did not miss his chance to box for a good cause. He was a featured fighter there who fought with St. Rita product Ryan Clancy.

All the money gathered during the event went into the organization’s account, which later went to Cancer patients for their treatment.

Besides, Nico Ali Walsh is also with his mom, Rasheda, and other Ali family members in the movement against racial discrimination.

In A Committed Relationship Since 2016

Rasheda Ali’s 20 years old son, Nico Ali Walsh, is not single. Nico is in a committed love relationship since the year 2016. The lucky girl is none other than Tavin Hays, a student of Lowa State University.

Both Nico Ali Walsh and his girlfriend Tavin Hays completed their high school from Bishop Gorman High School. Probably, the duo met there, fell in love and began dating since 2016.

Nico Ali Walsh’s girlfriend, Tavin, is very close to Ali and Walsh’s family. The love-birds, along with their parents, often post photos of one another in their social media pages. We wish the lovers all the best for their upcoming days.

His Brother Is A Pro-Football Player

As we mentioned earlier, Rasheda is a baby mama of Bob Walsh‘s two sons. Besides Nico, the happily married couple has the other athlete son, Biaggio Ali Walsh.

Nico’s parents welcomed his brother, Biaggio, on 4 September 1998. While growing up, the UNLV graduate of 2017 class, Biaggio chose football over boxing, unlike his brother. And now he is a famous professional American footballer.

Besides a career in football, Nico’s big brother is in modeling too. He models for various huge modeling agencies, including Wilhelmina and the Next Management Int.

Stay Close To Nico Via His Social Media Accounts

Most of the celebrity kids deny making their personal lives public by being available on Facebook, Instagram, and more. However, it’s not the case in Rasheda Ali’s son, Nico Ali Walsh. Unlike most of them, Nico is very active on social media and never hesitates to post in regards to his inner family life.

Either it is his Instagram Page or Twitter or even Facebook, Nico Ali Walsh’s fans can view his personal to professional life’s pictures without any restriction. He often shares snapshots of his family members, snaps from the boxing ring, and many more.

The Italian origin boy name Nico’s meaning is ‘Victory of the people.’