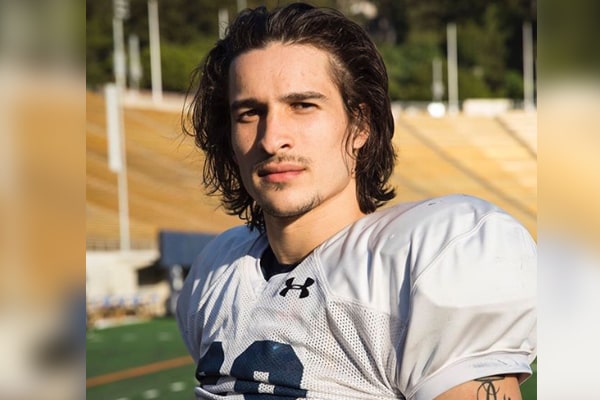 Rasheda Ali is an author, and media spokesperson. The president of RAW Dreams LLC and boxing mogul, Muhammad Ali’s daughter, Rasheda, is excellently celebrating life. She is enjoying her career and is happily married to her husband of more than two decades, Bob Walsh.

Furthermore, Rasheda is gifted with two wonderful sons, Biaggio and Nico Walsh. Today, we will be tailing Rasheda Ali’s eldest son, Biaggio Ali Walsh, who shook the world with his incredible athletic abilities.

Biaggio Ali Walsh was born on September 4, 1998, to Rasheda Ali and Bob Walsh. The couple has been married for more than two decades and shares two beautiful sons, including Biaggio.

Rasheda Ali’s son, Biaggio Ali Walsh, is arguably an exceptionally talented athlete. The boxing legend, Muhammad Ali’s grandson, inherited his athletic abilities and drive from him. Thus, he has been putting great efforts to make his name shine since his highschool days.

Unlike Biaggio Ali’s boxer brother, Nico Walsh, he opted for football and was named the MVP after leading the Gaels to their seventh straight state championship at Bishop Gorman High School.

Biaggio was regarded as the nation’s top running backs and was listed no.13 all-purpose back by 247Sports. Furthermore, Rasheda Ali’s son received ten college offers for football scholarships, including San Diego State University.

Unfortunately, he was redshirted in 2017, but 2018 came with a bang. Rasheda Ali’s son spent two seasons at the Pac-12 in Barkeley and played ten games for the Golden Bears.

As of 2019, he played for the UNLV  and was reunited with his high school coach, Tony Sanchez, and had three seasons of eligibility remaining since fall 2019 after winning his appeal with the NCAA.

Biaggio aspires to make a name of his own, all while utilizing the athletic gifts he received from his grandfather. Let’s hope his dreams come true, and we get to hear more of him in the future.

Associated With Next Model

Besides paving a path to a glorious career as a football player, Rasheda Ali’s son with Bob Walsh, Biaggio Ali Walsh, is also committing to a modeling career. He is associated with the Next Model since 2018.

While talking to Vogue, Biaggio revealed that he was discovered via Instagram and thus started his modeling journey during his off-seasons. Eventually, he began to love it.

Although Rasheda Ali’s son was spotted via Instagram, he has gone private, mentioning the Next Model in his bio. Besides growing his career as a footballer and a model, Biaggio aspires to own a Production Company with his brother Nico. He is studying film at Cal Berkeley. It looks like we will be seeing Rasheda Ali’s eldest child as an actor/producer as well.

One would never think twice to call Muhammad Ali the greatest. Although he was very dominating in the arena, Ali was sweet and humble outside, at least that’s how his grandson, Biaggio Ali, remembers him.

Biaggio Ali’s name is a memoir to grandfathers of both sides. Biaggio comes from his paternal side while his middle name, Ali, is from the maternal side. Although he hails from a family that has a great history behind, he wants to make a name of his own.

Muhammad Ali’s grandson, Biaggio, did not follow his grandpa’s footsteps, but he undoubtedly inherited his will and athletic genes. Furthermore, while talking to Vogue, he revealed that the biggest lesson he learned from his grandpa was to remain humble.

Furthermore, Ali believes the butterfly is his grandpa looking over him and revealed that it signifies rebirth and hope for him. Although Muhammad Ali succumbed to the divinity of the world, he left behind a great legacy.

Ali’s grandson, Biaggio, dreams of building his legacy, all while embracing the athletic gifts passed down through the legend. He further believes that his grandfather would have loved to be here, witness his success. Unfortunately, he cannot. Thus, Rasheda Ali’s son does his best to take after his hard work and dedication.

According to Review-Journal, Biaggio knows that there will never be another Muhammad Ali, but he wants to make him proud while making his name. All the lucks of the world to Rasheda Ali’s son, Biaggio Ali Walsh.

The name Biaggio is of Italian origin, which means ‘one who stutters.’ Likewise, Ali says elevated or high and is originated from Arabic.