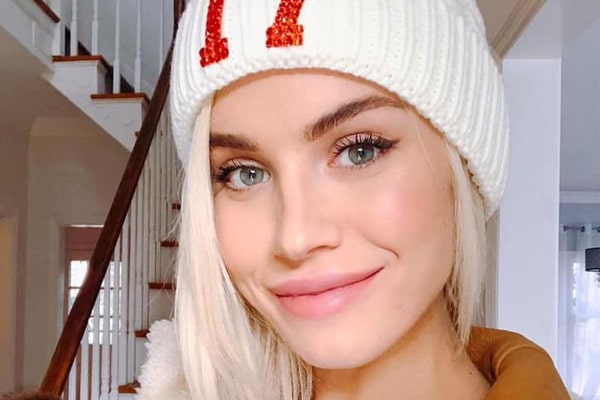 Beautiful Sydney Esiason is the daughter of Boomer Esiason with his long-time wife, Cheryl Esiason. Her dad, Boomer, is a former American football quarterback and a sportscaster. Well, Boomer played in the NFL for 14 seasons, primarily with the Cincinnati Bengals. Also, he was a member of the New York Jets and Arizona Cardinals. Currently, he is actively involved in helping people with Cystic Fibrosis through his Boomer Esiason Foundation.

Boomer Esiason took the wedding vows with Cheryl Esiason in 1986. Although it has been over three decades since the couple is in a marital bond, their love and care for each other are still the same.

The happy married life of Boomer and Cheryl gifted them with lots of love and two gorgeous children. They welcomed their first child together, Gunnar Esiason, in 1991. Similarly, the husband-wife duo’s second child, daughter Sydney Esiason, was born on 16 August 1992.

The youngest kid of the Esiason family, Sydney, completed her high school from the Friends Academy, a college preparatory school in Long Island. Then, she enrolled at Boston College for her further education. During Sydney’s tenure in Boston, she majored in English. Similarly, Esiason also played for the women’s club lacrosse team of BC. Eventually, she achieved her Bachelor of Arts in English and Communications in 2014.

Her Brother Was Diagnosed With Cystic Fibrosis

Aforementioned, Sydney has an older brother, Gunnar Esiason. While their father was at a Jets mini-camp in 1993, the two-year-old brother of Sydney, Gunnar, was moved to the hospital due to his difficulties in breathing. Later, doctors told the Esiason family he has Cystic Fibrosis.

Cystic Fibrosis is a hereditary dysfunction that affects the digestive system and lungs. So, Gunnar undergoes daily treatment and takes cystic fibrosis medications regularly. However, the CF did not stop him from following his father’s footsteps in the sports field. The high school football team in Long Island recognize him as a football coach.

Furthermore, Gunnar and Sydney’s parents established the Boomer Esiason Foundation to help patients with Cystic Fibrosis. Boomer and Cheryl’s primary mission to set up the foundation was to fund research to find a cure for CF. Also, BEF provides scholarships, hospital grants, transplant grants, and awareness of Cystic Fibrosis.

The oldest of Esiason siblings, Gunnar, is living everyday life just like other healthy people but with precautions. Sometimes, he wears a surgical mask in the football team’s germ-infected locker room. Also, he never forgets to carry the prescribed hand sanitizer everywhere he goes.

During Sydney’s graduation years at Boston College, she served as an intern in various high profile media and sports companies. Her first internship was for Maxim Magazine, where she was a public relations intern. Similarly, in the summer of 2012, Sydney worked at PAULE KA. Finally, her last internship was at CBS This Morning.

After graduating from Boston, Sydney worked as a Tailgate reporter for Jets Nation for a year. Then, she joined the National Hockey League (NHL) as an on-air digital host for some period. After that, Sydney worked for the Sports Illustrated as an anchor.

However, Boomer Esiason’s daughter, Sydney’s current work is yet to be revealed.

Boomer Esiason’s daughter, Sydney Esiason, met the love of her life on Twitter in 2012. In 2012, as a sophomore in the Boston College, she got a tweet from a stranger. He was non-other than the left-wing for the New York Islanders, Matt Martin. At first, Sydney felt kind of weird. However, she tweeted back. They became friends on Twitter and had their first date on New Years’ Eve. The couple began their romantic relationship since then.

On 18 March 2019, while Sydney and Matt were in Toronto, Canada, with their dog, Jax, they checked out the love locks art installation. At the same time, Matt insisted Sydney pose in front of the LOVE sign with Jax for a picture. While Sydney turned back, she was full of surprises to see Matt on one knee. After she accepted his proposal, they added their lock to the sign, writing ‘March 18, 2019’ with their initials.

Parents of Matt Martin and some of their close friends were also present in Sydney and Matt’s engagement day.

After being engaged in 2018, Sydney, and her then-fiancee, Matt, took their wedding vows on 29 June 2019. Their marriage ceremony took place closer to their home in Southampton, New York. For their reception, the couple chose the Sebonack Golf Club for its views of Peconic Bay.

With pops of blue and gold, lush florals, and fabulous fashion for all, Sydney Esiason’s marriage was a fusion of traditional and modern wedding and a total chic. The bride, Sydney, was wearing the Elie Saab ballgown, whereas her bridesmaids wore pale blue crepe Amsale dresses.

Furthermore, the bridegroom, Matt, was in a navy Indochino tuxedo with a black lapel and a black Tom Ford bow tie. Martin paired his tux with needlepoint lion Stubbs & Wooton Slippers as Sydney’s zodiac sign is Leo. As a final touch, Boomer Esiason provided American and Canadian flag pins for all the men in the wedding ceremony to wear above their white rose boutonnieres.

Reverend Eric N. Zile officiated the wedding of Sydney and Matt, which lasted about twenty minutes. Moreover, in honor of the pair’s engagement, they attached a heart-shaped lock and key to every guest’s escort card.

Has A Daughter With Husband Matt Martin

Just a month after the little girl of Boomer, Sydney celebrated her first wedding anniversary with her husband Matt Martin; she welcomed her baby girl on 14 July 2020. The husband-wife duo named her Windsor Grace Martin. Martin and Esiason had revealed that they were expecting a baby via their Instagram on New Year’s Day of 2020.

After Windsor’s birth, the proud momma, Sydney, posted her first-born’s photo to her Instagram, releasing her full name. Blessed father Matt also shared a photo of himself carrying his daughter and praising his lovely wife.

The happy couple, Sydney and her husband, currently reside in Roslyn, New York, whereas Sydney’s in-laws live in Canada.

Unlike most celebrity kids, the little princess of Boomer, Sydney Esiason, is very active in social networking handles such as Instagram and Twitter. She does not hesitate to show her personal life via her social accounts.