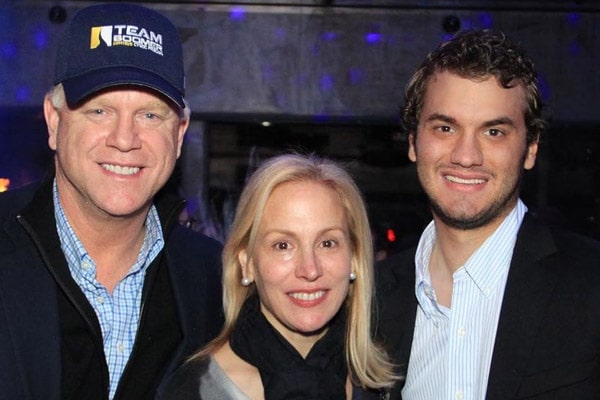 Boomer Esiason is one of the notable quarterbacks of sports history. He is a former American NFL quarterback and a sports commentator. During Boomer’s playing career, he was named to four Pro-Bowls and gained first-team All-Pro honors. Moreover, after retiring from football, Esiason worked as a football analyst for CBS Sports on The NFL Today and Showtimes Inside the NFL. Currently, Boomer co-hosts the Boomer and Gio in the Morning radio show.

Discussing the personal life of Boomer Esiason, he is married to Cheryl Esiason since 1986. He is a proud father to two children with his long-time spouse, Cheryl. Here, meet Boomer Esiason’s son, Gunnar Esiason, and know some of his facts.

Diagnosed With Cystic Fibrosis Since Childhood

The marital life of Boomer and Cheryl has crossed three decades now. The couple welcomed two gorgeous kids together throughout their conjugal life, son Gunnar Esiason and daughter Sydney Esiason.

Gunnar was healthy at the time of his birth. However, at the early age of two, he got diagnosed with a life-threatening genetic disease, Cystic Fibrosis. Since then, Gunnar undergoes daily treatments and takes cystic fibrosis medications. Moreover, Gunnar and his family are working actively to fund research to find a cure for cystic fibrosis through their foundation named Boomer Esiason Foundation.

Talking about Gunnar’s educational qualifications, he attended Boston College after completing his high school in 2009. From Boston, he graduated with a Bachelor’s degree in English Language and Literature in 2013. After that, he enrolled in Dartmouth College for his Master of Public Health in 2019. Similarly, Gunnar is also doing his MBA at The Tuck School of Business at Dartmouth.

Despite the complications that people might face with Cystic fibrosis, it is still manageable to live a normal life fully and happily. Boomer Esiason’s son, Gunnar, is the best example of this. Although Gunnar struggles with a CF, it did not stop him from doing some of the things he likes.

Furthermore, Gunnar Esiason worked as an External Consultant in the marketing department of Nestle Health Science. There, he discovered a gap between Nestle, and it’s consumers in the enteral feeding market.

Despite the time-consuming treatments one must undergo with Cystic Fibrosis; it is appreciative that Boomer Esiason’s son is managing to achieve the challenging goal of living a busy life.

Board Member At Boomer Esiason Foundation

Besides coaching high school hockey, Gunnar works full time at Boomer Esiason Foundation, helping his father, Boomer’s fight against Cystic Fibrosis. According to the Linkedin profile of Gunnar, he is the Director of Patient Outreach, CF Patient Advocate, and a Board Member of the foundation situated in New York.

Apart from Gunnar’s active involvement at the Esiason family foundation, he has his own blog. In his blog, he writes his everyday experiences as a Cystic Fibrosis patient. Moreover, he regularly writes about CF updates and his opinions on medical topics in general. Also, Gunnar hosts a wonderful podcast on his blog, highlighting the challenges CF patients face and those who encounter them.

Furthermore, the health-concerned son of Boomer, Gunnar, is also a Motivational Speaker and a Lecturer. He delivers motivational speech awaring people about CF in several schools, colleges, and health care organizations around the United States.

Boomer Esiason’s son, Gunnar Esiason, is engaged to his girlfriend, Darcy Cunningham, since 18 February 2020. The Valley News reported that Esiason proposed Cunningham while they were ice skating together on Occom Pond. Moreover, Gunnar shared a photo of their lovey-dovey moment on his Twitter the same evening.

I will love you forever. pic.twitter.com/H1ATjHsRmd

Gunnar met his love, Darcy, through his mutual friends and fell for each other. After dating for some years, the pair moved to Hanover in 2019 so that Gunnar could continue his studies.

Gunnar Esiason’s fiancee/soon to be wife, Darcy, is a psychotherapist and works as a contract researcher for several trauma labs around the USA in the present. Moreover, she is also a primary caregiver of Gunnar, which has helped the couple strengthen their bonding.

For now, Boomer Esiason’s son, Gunnar, is living a contented life with his bride-to-be, Darcy Cunningham. And, she has a great bonding with the Esiason family.