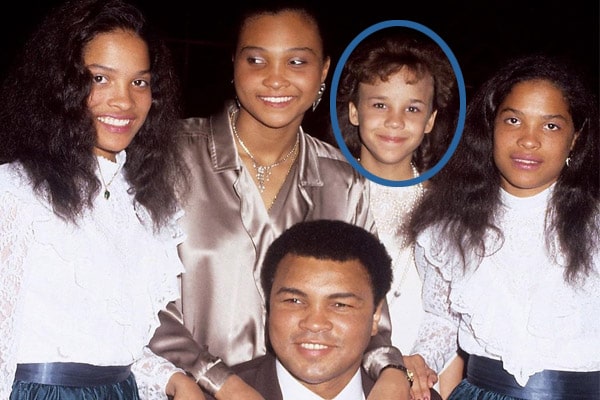 The legendary Boxing Champion Muhammad Ali is in the head of every boxing lovers and to those who are in boxing. After all, since he entered the world of boxing with the name Cassius Clay in 1960, he established himself as an unbearable load mouth. Aside from his professional career, there is so much to talk about regarding his personal life.

Muhammad Ali is the father of nine children from different relationships. Miya Ali is also among them, whom he had from his extra-marital affair with Patricia Harvell. So, today in this article, indulge yourself in seven lesser-known facts about Muhammad Ali’s daughter Miya Ali.

Miya Is The Daughter Of Muhammad With Patricia Harvell

The beloved aunt of Jake Joyce, Miya Ali, was born in 1972 in the United States of America to Patricia Harvell and Muhammad Ali. At the time of her birth, her greatest boxer of all time, dad Muhammad, was in a marital relationship with his second wife, Khalilah ‘Belinda’ Ali. However, he dated her mother, Patricia, resulting in her birth.

Besides being married to Belinda and dating Patricia, Miya’s papa was in a love affair with a third woman named Veronica Porsche during her birth year. Later, after Miya came into this world, her father and mother separated. He didn’t marry her mom, Patricia.

Mia Ali Is A fourth of Nine Ali Siblings.

Aforementioned, Miya Ali’s father, Muhammad Ali, has nine children. And Miya Ali is the fourth among all the Ali siblings. Miya’s father Muhammad welcomed his first child and oldest among all, Maryum Ali, on 18 June 1968 with his second wife, Khalilah, aka Belinda. The ex-couple further gave birth to twin sisters, Rasheda Ali and Jamillah Ali, in 1970.

Furthermore, Muhammad Ali welcomed his younger son, Muhammad Ali Jr., with Belinda in the same year Mia was born, in 1972. After the official separation with the second wife, Mia’s father tied his knot with Veronica Porche Ali on 19 June 1977. With her, Muhammad has two gorgeous daughters Hana Ali and Laila Ali, born in 1976 and 1977, respectively. Their relation also didn’t last long, resulting in their divorce in 1986.

Mia’s dad, Muhammad’s marriage life didn’t end there. He got hitched with his fourth spouse Lonnie ‘Yolanda’ Ali, in 1986. The couple didn’t have any children together. They adopted a boy, Asaad Amin, before the sudden demise of the father of nine Ali siblings, Muhammad, on 3 June 2016.

Besides, Mia Ali has one more half-sister from her father’s affair with Aaisha Fletcher. Although the former duo split-up after a few months of their romance, they have a daughter, Khaliah Fletcher Ali, during the early 1970s.

Muhammad Ali’s daughter, Miya Ali, is far from the reach of media paparazzi. Being the daughter of a celebrity, she rarely appears on the media platform. And, Mia makes sure the channel peoples do not focus on her.

Moreover, Miya Ali has an Instagram Page. She often shares a photo of a guy named Mike mentioning him as her son. However, Miya has not disclosed any information in regards to her children. Plus, she also seems to be a loving grandmother. Nevertheless, we hope Miya will disclose the fact about her marital status and her son in public soon.

Miya Grew Up Unknown About Her Father’s Popularity

During the Marchon Film Fest, Mia Ali spoke about her childhood and how she grew up as Muhammad Ali’s daughter. Her mother, Patricia, raised her and schooled her at a public high school called Teaneck High School, Bergen County. At that time, Mia and her momma, Patricia, received less public attention as Muhammad didn’t marry Patricia.

During her childhood days, Miya never realized how famous personality her dad was until he gave some hint to her at the Olympics in 2012. In the interview at the Film Fest, she told that her father was a giver, loved people, children, and was an ambassador for peace for the United Nations.

Miya added that when she was in her childhood, her dad would bring homeless people to live with them. Muhammad always tried to save people. Her father, Muhammad, did so much which many people don’t get to hear or see.

The daughter of former boxing champ, Muhammad Ali, Mia Alli’s net worth, is yet to be revealed. Furthermore, Miya is an employee in the WorldVentures; She works there as Group Sales Manager. According to Glassdoor, the average base pay for a sales manager in WorldVenture Holdings is $59, 037, with an additional $2, 057. Miya also might get a similar payment from her profession.

Aside from WorldVentures, IIN graduate Miya is a Brand Ambassador at her half-sister, Laila Ali’s Lifestyle. Besides, Ali has experience working in various managerial positions, which includes Accountant General, Catering Sales Manager, Accountant director-group sales, and many more.

Miya’s late pops Muhammad Ali had amassed a whooping sum of an estimated $80 million. Hardly, anyone can tell what she inherited from her dad, but we assume she will add millions to her asset like her dad.

Miya Ali Is Following Her Dad’s Footsteps In Social Service

“What you do on this Earth is the rent you get to pay to get into heaven.”

Showing regard to the same saying of Muhammad, his daughter Miya is also succeeding him as a Humanitarian. Whenever it comes to supporting charitable and philanthropic causes, Miya Ali is always there to promote the welfare of others.

Miya Respects Her Father A Lot

One of the famous boxers of all time Late Muhammad Ali’s all nine kids have varying perspectives on him. Miya’s half-brother Muhammad Ali Jr. offended their father and lived apart from him for so long. He only returned at the time of Muhammad Ali’s demise.

And, Miya’s sister Laila clashed with their father over her choice to be a woman boxer. After Laila succeeded in being a boxing champion, the father-daughter duo battled multiple times in the boxing ring.

However, all the nine kids of Muhammad, including Miya Ali, respect their father. Although they felt pain due to Muhammad Ali for leaving their mother for other women, they have no hatred for their dad. Every daughter and son of Muhammad Ali has a great memory with their dad, which they often post on their social media pages.