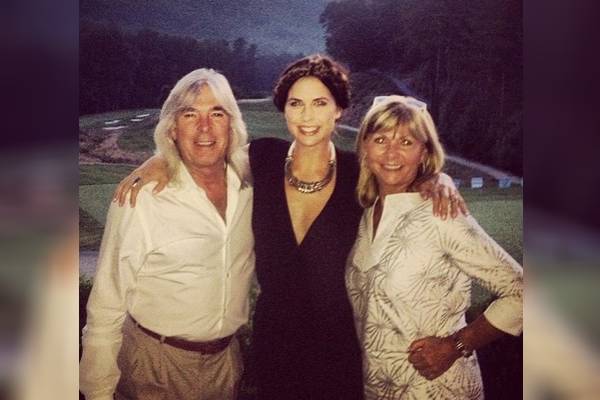 Cliff and Georganne are proud to have Erin Lucas as their daughter. Image Source: Facebook

Besides having a successful career, Cliff is also known for his married life with philanthropist Georganne Williams. They have been together since 1980, and the couple has welcomed two children, Erin Lucas, and Luke Williams. Here, we will be discussing Cliff Williams’s daughter Erin Williams and her whereabouts.

First Born Of Cliff And Georganne

Born on October 24, 1984, in Honolulu, Hawaii, Erin Lucas is the first-born child of singer and musician Cliff Williams with his wife, Georganne Williams. Erin arrived in his world after four years of her parent’s marriage. Well, the beautiful Erin uses her brothers’ name as her surname.

Cliff Williams’s daughter, Erin Lucas, is an established name in media and modeling. Besides, the talented personality is also well known as an American businesswoman. She is also the founder and creative director of an interior design studio, House of Lucas.

Erin Lucas Has A Younger Brother

Erin Lucas became an older sister to Luke Williams only a year after her birth. Similarly, Luke has also established himself as a designer. He has worked as an art and creative director in numerous workplaces. Cliff Williams’s son, Luke Williams, is the founder of Bone Design that was established with the concept that the latest and expanding brands deserve a flexible design system.

The talented designer also has a Bachelor’s degree in Fine Art and Graphic Design from the oldest independent, continuously degree-granting college of art and design in the U.S., Maryland Institute College Of Art.

Erin Has A Degree In Media, Culture, And Communications

The stunning model Erin Lucas spent most of her childhood days touring with her father’s band AC/DC. Being a daughter of a musician, the music industry became an integral part of her incredible life. Although she has not revealed her high school qualification, we can assume that she must have done some outstanding work from her school days.

Erin Lucas’s passion for fashion and love for music led her to New York, where she did her commencement with a Bachelor’s degree in Media, Culture, and Communication. She also secured her undergraduate degree in Interior Design from a private for-profit college, Fashion Institute Of Design And Merchandising in Los Angeles.

Started Her Career As A Cast Member In A Television Show

Aforementioned, after the completion of her studies, Erin Lucas had made big waves starring as a cast member of MTV reality television show The City, where she reunited with her long-time friend Whitney Port.

Erin is one of the most popular and trending celebrities who entered the hosting world and not only blossomed but flourished. After her appearance on The City, she made her base strong and hosted the show Sex and Relationship on Current TV. The girl with her magnetic personality also hosted and produced another fashion show named Style Lounge.

According to IMDb, she is also noted for her work on a documentary named The Alley Cats.

Erin Is Also An Interior Designer

Although Erin got interested in entertainment while studying at New York University, she pursued a new challenge in interior designing. She received her Associate of Arts Degree in interior design from the Fashion Institute of Design & Merchandise.

The talented designer has over 15 years of experience creating beautiful print publications and it is evident in her creativity. Over the course of her career, she was mentioned for her lead role in designing several magazines. The creative personality tried her best to make a brand’s visual identity adaptable and relevant to readers.

After completing her series, Erin Lucas relocated to California to pursue a new challenge in interiors. She initiated her own business of interior design studio, House of Lucas. Later has also started an Instagram page for the commercial promotion of her designs.

The talented personality Erin Lucas loves being in love but hates being tied down. Back in 2009, she was in a relationship with Patrick Cabido, who is the manager at NYC’s Gold Bar. The news was circulated through MTV News.

However, she has not disclosed her present relationship status, so we cannot be sure if she is still in a relationship or has parted away.

Disagreement With Whitney Made Her Quit The Show

As stated earlier, Erin Lucas met with her long-time friend Whitney Port in the MTV reality television show, The City. Things changed between them, and the distance between the two friends increased. Despite this, Erin mentioned that she doesn’t have any bad feelings for Whitney and would give her an embrace whenever the two meet.

The charming host was only seen during season one of the show; even so, she had shot for some episodes of season two. She had never thought of leaving it aimlessly but couldn’t do anything on her own.

Erin Lucas Honored Her Father With A Tattoo

One of the famed models, Erin Lucas’s has a thunder tattoo on her right side of her ribcage. The tattoo is taken from her dad’s band logo AC/DC.

During an interview, Erin mentioned that she got her tattoo on the special occasion of Father’s Day. Her tattoo on her body is an honor towards her dad’s band and symbolizes how much she praises the music.

The free-spirited model and host Erin Lucas’s net worth still needs to be calculated. So the exact assets assembled by Cliff Williams’s daughter are still unknown. However, she must be earning a reasonable amount from her profession as a model, host, and businesswoman.

However, Erin seems to be living a lavish life. As her father has collected a reasonable amount from his career as a musician and has a net worth of $100 million she must have inherited some amount. Let’s wait and watch if Erin will be able to collect such a sum as her father or not.