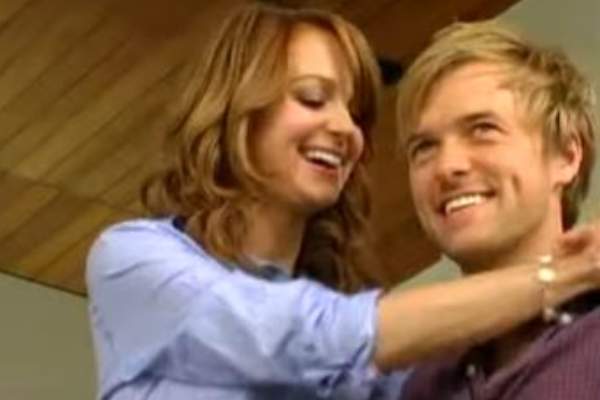 Jude Jones is the only child of Adam Campbell and Jayma Mays. Image Source: Social Media.

Adam Campbell and Jayma Mays are a power couple in the entertainment industry. The English actor and the American actress have acted in several movies and series. Adam is known for his roles in different films like Date Movie, Epic Movie, Wolves at the Door, etc. Likewise, Jayma has acted in Glee, Red Eye, Paul Blart: Mall Cop, The Smurfs, and others.

The couple got married and then further decided to extend their family of two to three. Jude Jones is Adam Campbell’s son with Jayma Mays. The fans are curious to know how the little guy is growing up. So, stick with us till the end to find out more about the little boy.

Only Child Of His Parents

After getting married, the couple waited a few years before deciding to grow their family. Then, in April 2016, a rep for Jayma confirmed exclusively in the new issue of Us Weekly that the actress was pregnant and was expecting her first child with her partner, Adam.

On August 21, 2016, the husband and wife welcomed their baby boy, Jude Jones. The new parents were ecstatic upon his arrival. Unfortunately, the media has not gotten sight of Adam Campbell’s son with Jayma as they have kept him away from the limelight. Nonetheless, he must be having a wonderful time growing up.

His Dad And Mom Are An Ideal Couple

Adam and Jayma met for the first time in 2006 on the set of Epic Movie, where they played brother and sister. Then, the duo started dating and tied the knot on October 28, 2007. Talking about the time they met, Adam Campbell’s wife said that they were very professional and responsible. So for the next three months, the lovebirds got to goof off and know each other really well.

The pair went to Denny’s for their first date. As of 2022, it has been over a decade of sharing a blissful marital life. The duo is a perfect couple, and one can get inspired by them a lot. Even after all these years, Jude’s dad and mom keep the spark alive through sweet gestures for one another daily.

In one interview, Jude Jones’ mother revealed that his father makes her coffee every morning, which is really essential. As a result, she feels lucky and always thanks him. Likewise, the duo supports one another no matter what, and it’s no surprise that their marriage has entered its fifteenth year.

Adam Campbell’s Son Is Born Into An Acting Household

Jude is born into an acting household since his dad and his mom are both actors. Jude Jones’ father hails from Somerset, England, and started his career in 2004. He made his acting debut in the same year in Commando Nanny, an unaired sitcom for The WB Television Network. After that, Adam starred as Alyson Hannigan in Date Movie.

The movie received mild success at the American box office. Jude’s dad has starred in movies such as Making a Spoof, Pop Star, Epic Movie, Spin, Hell on Wheels, The Five-Year Engagement, and Wolves at the Door. Likewise, some television series he has acted in are NCIS, Dice, Harper’s Island, Touch, Great News, and others.

On the other hand, Jude Jones’ mom made her television debut in 2004 in Joey. Hailing from Tennessee, her first feature film is the 2005 movie Red Eye. Her other film credits include The Smurfs, American Made, Disenchanted, Epic Movie, Last Weekend, etc. Likewise, Six Feet Under, How I Met Your Mother, Ugly Betty, Glee, The Millers, Getting On, and others are some of the television series she has acted in.

Being born into an acting household, will Adam Campbell’s son follow in his and Jayma’s footsteps? Well, as he is still young, he’s got a lot of time to figure it out. He currently must be focusing on his studies.

Nevertheless, we hope Jayma Mays’ son will become a successful personality. Hopefully, he will continue to have sound health and blissful days in the future.

Greatly popularized by the iconic The Beatles song, “Hey Jude,” the name Jude has a Greek origin and means “Praised.”