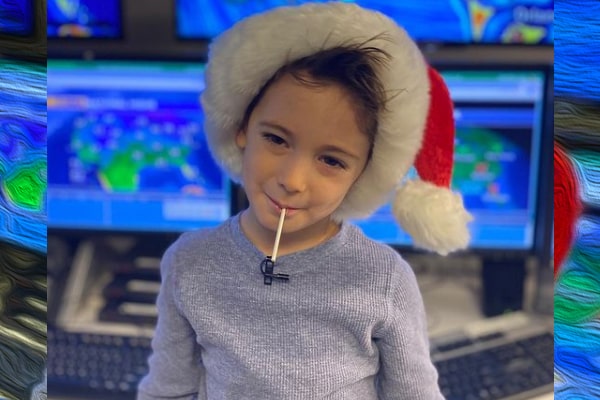 Media personality Ben Aaron married the chief meteorologist for ABC News, Ginger Zee, in 2014 and welcomed two kids, Adrian Benjamin being their first kid. The pair is very candid about parenting and often post about their babies and parenthood.

The couple first revealed the sex of their baby during a fun Good Morning America segment in July. Zee and Aaron further celebrated the arrival of their baby boy with a festive pumpkin-themed shower.

Furthermore, Zee announced her son’s birth via Twitter the following day, sharing a family photo. She later appeared on Good Morning America from her hospital room; Zee revealed that the newborn was doing well and is very alert.

Ben Aaron’s wife further added the cute stuff like eating and burping and all the stuff he’s supposed to do. Finally, she ended the report revealing the new dad is in charge of diapers.

Is An Elder Brother & Has Already Started School

Adrian’s parents, Ben and Ginger, gave birth to his younger brother, Miles Macklin, in February 2018. The pair cannot believe that their toddlers are already ready for school. Furthermore, Ginger shared her excitement and concern about them growing up faster via Instagram in August 2020.

Adrian’s mother wrote, ‘Parental worry on level 10,000..’ But, she continued, ‘I know they will be OK, and school is good,” and concluded the caption, “I just love them so hard.”

Moreover, both Ben and Ginger share glimpses of their kids’ lives and their own as a parent. Also, while going through Adrian’s parents’ Instagram, he seems to have a special bond with his parents and brother.

Additionally, Adrian is a happy child enjoying outdoor activities as well as tiresome karaoke nights. Moreover, he seems natural about being forth camera and speaks very confidently.

Similarly, both Adrian and his brother are encouraged to practice gratitude from a young age, and hence, they shall grow up to become more compassionate.

Adrian Benjamin’s Parents Got Married In 2014

Ginger Zee, a meteorologist, and WNBC personality, Ben Aaron got engaged after nearly two years of meeting in August 2013. Furthermore,  Adrian’s parents got married on June 7, 2014, in an intimate ceremony in Michigan.

Although the ceremony was intimate, the couple celebrated their love grandly. Moreover, Adrain’s mother, Zee meticulously planned the wedding with her best friend and wedding planner, Francesco Bilotto, near her hometown.

Likewise, the guestlist of 55 was offered pashmina in case of the weather while witnessing the beachside nuptials & hear them deliver their traditional vows. While talking to the People before the wedding, Zee revealed that it was crazy to bring families from all over the States to Michigan. However, she was too sure that they would love peace in northern Michigan and will be the most incredible day of their lives.

Well, Adrian’s mother knew Ben is her partner for life as soon as they met. Thus, to get married in 2014 was the best decision the pair ever made, and to welcome their first child a year later must have changed their lives forever for good. They have amassed a fortune from their respective career and now enjoys a lavish lifestyle.

Hence, let’s hope to hear more of Ginger Zee and Ben Aaron’s son, Adrian Benjamin Colonomos, in the coming days. Until then, what do you think will he choose to become, a meteorologist like his mother or a media personality like his father?

The name Adrian has a Latin origin, which means ‘son of Adria.’ Likewise, it also means rich in Greek.’