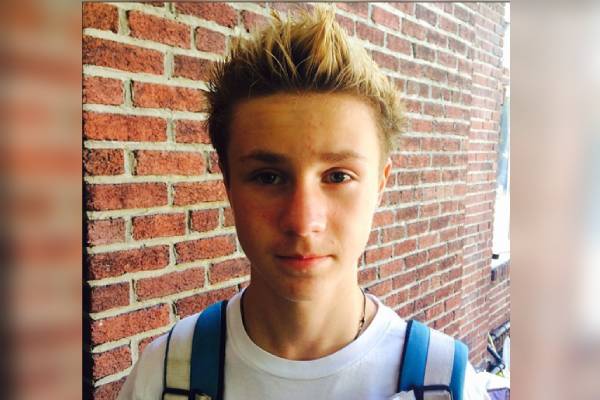 Lauren Michael Holly is one of the few actresses who has had significant success on big and small screens. Her performance in the 1994 comedy movie Dumb and Dumber with ex-husband Jim Carrey initially catapulted her fame. Lauren Holly’s other well-known works include Picket Fences, NCIS, Motive, Dragon: The Bruce Lee Story, Beautiful Girls, and What Women Want.

Aside from her acting career, Lauren is equally famous for her personal life and relationships. The actress has been married thrice, first to Danny Quinn, then to Jim Carrey, and lastly to Francis Greco. While Lauren’s first two marriages did not last long, her marriage with Francis lasted for around thirteen years. In those thirteen years, the former couple adopted three children.

However, the former pair have not revealed much about their kids. So, why not get to know one of Lauren Holly’s sons, Alexander Joseph Greco, in this article. Furthermore, let us see how the celebrity kid is growing up.

Lauren Holly got married to her ex-husband Francis Greco on March 10, 2001. Not soon after the ex-couple tied the knot, they adopted three kids. The eldest of their kid Alexander Greco was named after Holly’s brother, who died at 14 in a fire.

However, Alexander later changed his name to Azer Greco. Alexander grew up in a loving family and is the doting brother to Henry Greco and George Greco.

Unfortunately, Azer Greco’s parents divorced in 2014, following which his mother single-handedly raised him and his brothers. While Greco’s mother remained in the spotlight after the divorce, his father was completely out of the picture.

So it’s unclear whether Alexander and his siblings have any contact with their father. However, given that all three of Holly’s children have embraced his surname, one can assume that they may still share a bond with their father.

Even so, in an interview, Lauren stated that it was challenging to teach her youngsters to be gentlemen in the absence of a figure to look up to in the house. However, with or without a father figure, the boys have blossomed into responsible adults. Furthermore, the boys are very close to their mother and frequently accompany her to her workplace and vacations.

Has Followed In His Mother’s Footstep

When you are born to a Hollywood legend, the odds are stacked heavily in your favor that you will one day be as successful as, if not more successful than, your parents. However, just because they were born with a silver spoon does not guarantee success. Believe it or not, there is an unseen public pressure on these celebrity children to carry on their family legacy.

Still, it would be a shame if not one of Lauren Holly’s sons followed in her footsteps. Fortunately for everyone, Holly’s eldest son has decided to carry on her legacy by trying his hand at acting. Along with the timeline, here are some of the films and television shows in which Alexander has appeared:

The rising actor has yet to land any lead roles in films or television shows. But we hope that he will become a star in the future. Moreover, with such a talented personality as his mother to guide him, Azer is bound to succeed in the entertainment industry.

As a result, we can anticipate great works from the emerging actor in the coming years. For the time being, let us all send our best wishes to the upcoming actor and wish him success in the future.

Does Lauren Holly’s Son Have A Girlfriend?

As the children of a celebrity, their personal life is bound to pique the interest of many. So, to no one’s surprise, whether or not Alexander Greco has a girlfriend has been a topic of discussion among many people.

The celebrity child was previously in a relationship with a girl named Shantelle. Moreover, in what appears to be his previous Instagram account, he has shared numerous romantic photos with his then-girlfriend.

Looking at the images, it seems like the pair started dating in high school. However, the adorable pictures ceased to appear in his feed as time passed. Do you think the couple might have split up?

Furthermore, because Lauren Holly’s child is no longer active on social media, it is difficult to determine whether or not Azer is currently dating anyone. Nonetheless, Greco’s mom did share a picture of him with his prom date, Lauran Skelton, on her Instagram. So, it is possible that the oldest Greco sibling is keeping his romances private.

Regardless, let us hope that once Alexander finds his soulmate, he will not hesitate to share the news with his admirers.

Alexander is a Latinized version of the Greek name Alexandros, which means defender of men.  On the other hand, Joseph, derived from the Hebrew words: Yosef and Yasaf, means to add or increase.