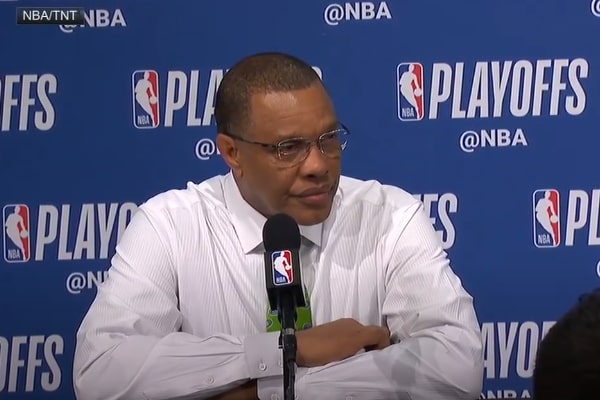 If Anthony Davis‘ dramatic trade to the Lakers didn’t surprise you, Alvin Gentry’s dismissal from the New Orleans Pelicans must-have. Well, it’s the game and a challenge Alvin had to face and couldn’t get the result. However, he was picked by the Sacramento Kings as the associate head coach, and Gentry has settled in there since initial October 2020.

While Gentry’s downfall in the NBA is significant, his personal life is as blooming as ever. Alvin Gentry’s wife, Suzanne Harris, has been a massive cheerleader for him since their decades-long relationship. The couple shared vows in the early 90s and are blessed with two beautiful kids. But did you know Gentry had a daughter from his first wife? Or did you know he had been married to someone else before Suzanne?

If you didn’t know about Alvin Gentry‘s children, two sons with Suzanne, and a daughter from his first marriage, this article is for you. Go till the end of the word trail and know who Alvin Gentry’s ex-wife was and learn about his kids, of course.

As aforementioned, Alvin Gentry is a proud father of three kids who have been thriving to make a career of their own.

As stated above, Alvin Gentry was married to Pat Sue DeLuca before meeting the love of his life, Suzanne Harris. The former couple welcomed a beautiful baby girl, Alexis Gentry, from their marriage.

As stated above, Gentry’s oldest kid, Alexis Gentry, is his first child with former partner, Pat Sue DeLuca Gentry. The couple welcomed Alexis during their brief marriage of five years.

Although Gentry’s baby girl, Alexis’s childhood details are unavailable, she is currently working on a pop-culture blog, Trash Wire, with her mother. She identifies herself as a social media nerd, pop culture blogger, and amateur hand letterer.

Furthermore, Alvin Gentry’s daughter is multitalented as she runs a digital art Instagram. Moreover, Alexis Gentry’s Instagram has over 1000 followers with good engagement and over 1600 posts. Although her Insta bio introduces her professionally, she professed of being Alvin Gentry’s daughter on Twitter. Guess Alexis altered her social sanctuary to Twitter, unlike most people, eh?

Besides having extraordinary talents and diverse interests, Gentry’s baby girl is an avid cat lover as she mentioned ‘mother of cats’ on her Insta bio. Judging by her Instagram posts and tweets, she is secretive. A divergence attitude between the mother-daughter duo is that Alexis’s mother posts Alexis’s baby pictures and enjoys being spontaneous.

Apart from being business partners, Alexis and Pat Sue are very close as parents-kid. Furthermore, Alexis mourns for her cats on Instagram but refrain from sharing moments with her family. Guess it’s a Gentry thing as Alvin has privatized his Instagram, and his Twitter is shushed since 2016.

Well, whichever the case, Alexis probably shares a good relationship with her half-brothers, Matthew and Ryan.

Former New Orlean Pelicans’ coach Alvin Gentry is a happy family fan regardless of his career turbulence. Alvin welcomed two sons with wife, Suzanne Harris, whom he married in 1990 in Bexar County, Texas, United States. Both Matthew and Ryan learned to be secretive with their father.

Moreover, Alvin Gentry’s son, Ryan M. Gentry, is present on Instagram flaunting 626 followers and 246 posts, but in private. Additionally, reading his caption, the goofy-good-looking guy in Ryan’s DP goes to the University of San Diego Class of 2020.

Regrettably, Alvin’s other son, Matthew, prefers to stay away from social media momentarily. Matt did appear on a few Gentry’s games accompanied by his brother and mom. Gentry enthusiasts superbly appreciate the rare appearance.

However, fame makes Gentry’s fans entitled to his details, which could be why he craves privacy. Therefore, respecting their need for privacy, let’s hope to see more of Alvin Gentry’s children in the coming days.

The name Alexis has Biblical origin which means the protector of mankind. Similarly, Matthew means the gift of God and has an English origin. Likewise, Ryan means Descendant Of The King and is of Irish origin.