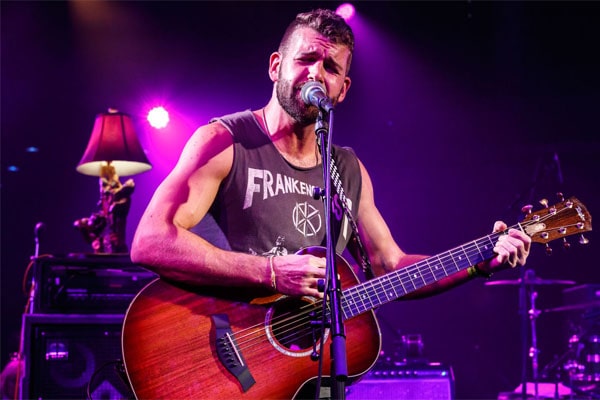 The American rock vocalist and songwriter, Samuel Roy Hagar, aka Sammy Hagar, well known by his stage name, The Red Rocker, is the father of four children. Among them, Andrew Hagar is Sammy Hagar’s son with his ex-wife, Betsy Berardi, and was born in 1984. Andrew’s parents divorced each other after 26 years of marriage.

Then, Sammy went on to marry his current wife, Kari Hagar, on November 29, 1995. Andrew has an elder brother named Aaron Hagar and two half-sisters, Kama Hagar and Samantha Hagar, who are Sammy Hagar’s daughters with wife, Kari Hagar. So, without further ado, let’s get to know more about Andrew Hagar.

The talented  Andrew Hagar, aka Drew Hagus, is a singer-songwriter-guitarist by profession. The singer has probably made a good fortune from his career.

He started his music career in late 2015 by writing songs and performing as well. The things escalated quickly after he formed the Appalachian Murder Bunnies, a folk duet project with Kelly Kristofferson. Then, he traveled the world and kept the modern folk music alive doing tours and all in 2016.

However, after the band breakup post-tour, he focused all of his creative energy on writing original music and getting back on track. Thus, Andrew formed a band named The Brothers Hagus and dropped their debut EP in spring 2017. The singer also has a self-titled website, ‘Andrew Hager‘, where you can surf his Spotify streams, Instagram, Facebook, and Soundcloud.

Despite being a singer, it was not Andrew’s first career choice. Well, he spent years toiling away in journalism, the Tequila Industry, video game industry, and also an MMA and Kickboxing coach. His career took a U-turn after a kickboxer threw an errant punch and accidentally broke one of Hagar’s fingers at a training session. Luckily, he was able to play an acoustic guitar and make gigs. And now, he has made his dad proud of his music career.

Talking about Andrew Hagar’s love and relationship affairs, he dated Kris Kristofferson’s daughter, Kelly, in 2016. As mentioned above, Hagar and Kelly, along with her dad, formed a folk group, the Appalachian Murder Bunnies. They even spent lovely times during 2016 tours in the USA and Europe.

Nevertheless, the couple broke up with each other. Sammy Hagar’s son, Andrew, seems to be single as of now. Perhaps, the singer is well focused on his rising career and does not want to be in any kind of relationship at the moment.

Sammy Hagar’s son, Andrew Hagar, has a strong bond of love with his elder brother, Aaron, and two half-sisters, Kama and Samantha. The siblings are very close to each other. Going through Andrew’s Instagram account we can see how much he loves to be around them and do weird and fun things.

The Hagar family seems to have a great bond of love and are inseparable. He is always there to protect his gorgeous sisters. Let’s hope their happiness and joys between them never fade away.

Andrew is a word derived from the Greek word, Andreas, and it refers to ‘manly, brave.’