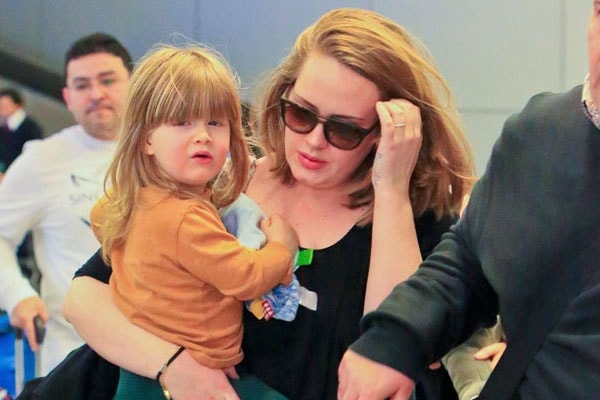 Adele and her son Angelo Adkins at the airport. Image Source-celebforest.

The Hello singer, Adele’s son Angelo Adkins was born on 19 October 2012. He is the first child of Adele with her husband Simon Konecki. Over the years, Adele has managed to keep her life pretty private. They had a low-key marriage ceremony in 2018. In the case of their son too, the couple makes sure to keep him away from the media attention.

The arrival of Angelo Adkins has brought much happiness and blessings into the couple’s life. Since he is the only child, both Adele and Simon try their best to keep him under normal conditions, especially from the public eye. There is no doubt Angelo is loved dearly as he doesn’t have any other siblings to share his parents’ love with.

Even though Angelo is the son of a famous singer like Adele, he doesn’t have a frequent appearance on social media. The couple has tried their best to avoid attention from the paparazzi in order to stop creating rumors. They don’t want their son’s private life to be interfered with just because of his parents’ cause.

Every child deserves privacy. They shouldn’t be the victim of what their parents have stored in the past. In the case of Angelo, his parents have decided to wait for his decision. The couple wants him to decide whether to come out in public or not. For now, he is still a child. He has to wait for his teenage years to think about it.

You might have noticed that most of Adele’s picture has been blurred out to avoid her son Angelo’s appearance. However, in the past, we got a rare glimpse of Angelo with his mother in the Central Park Zoo.

As of now, Adele’s son Angelo Adkins is six years old and his mother adores him a lot. Adele shared that her son, Angelo was the key factor for her happiness and her success. Since he was born, she felt like she has got a purpose to live on this earth, and being in motherhood has given her proudness than any other thing.

Since Angelo has the gene of a musician, there is no doubt that his mother’s talent has passed down to him. We are eager to see him growing up and sing like his mother. We aren’t sure though. Possibly his ambitions could be in a different direction than his mother. However, we hope he carries his mother’s legacy.

During one of the interviews, Adele opened up short about her son. Adele said that her son prefers “row, row, row, your boat” to her records. And when she sings him a lullaby, he tells her to shut up.

We wonder if Adele is planning on having a second baby or not.

Angelo Adkins’ parents, Adele and Simon are very particular about their privacy. So, when news broke about the couple’s divorce, many were surprised. The pair had been together since 2011 but their relationship ran its course and Adele filed for divorce in September 2019.

Adele and Simon Konecki’s divorce was finalized in March 2021 and the British singer has since moved on with sports agent Rich Paul. Moreover, Angelo’s mother has opened up about how the struggles of divorce and being a single parent.

The Hello singer even released her first single in years, Easy On Me, which revolved around her marriage and eventual divorce. She has stated that the album and songs are an open letter to Angelo. She hopes that after listening to it the little one can understand why his mom and dad had to separate.

Despite their divorce, Angelo Adkins’ parents are close and are co-parenting him. And while the family might not live in the same home now, Adele’s son is still the priority for the former couple. He must be having a wonderful time growing up away from the media scrutiny.

Angelo name is derived from the German word and it means nobility.