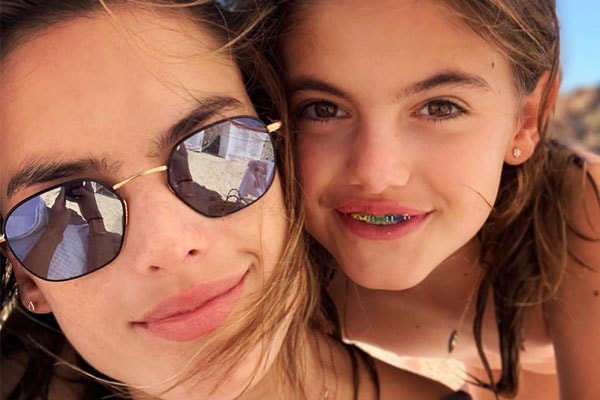 The Victoria’s Secret model, Alessandra Ambrosio’s daughter, Anja Louise Ambrosio Mazur, was born in 2008, as the eldest daughter of the family. The firstborn of Alessandra and her former husband, Jamie Mazur, Anja is the big sister of the adorable young son, Noah Phoenix Ambrosio Mazur.

The proud parents, Alessandra and former husband Jamie, exchanged their wedding rings on 2008. However, the longtime relationship ended on March 17, 2018. Besides that, the former soulmates are on good terms.

Baby Anja’s performance at the Coachella 2017

The mini-me of the famous Victoria’s Secret model, Alessandra brought her identical daughter to the festival of oversaturated colours Wonderland. The little Anja was successful in attracting the huge crowd with her adorableness and her charm. Furthermore, the supermodel not only toted her little girl with her, but baby Anja performed on the stage.

The proud mother, Ambrosio posted a picture of her little angel rocking Coachella. The Victoria’s secret model wrong alongside a video of baby Anja on stage. The video shows mother Ambrosio’s mini-me singing the lovely song “Sara” by Fleetwood Mac. Furthermore, the eldest Mazure seems quite self-possessed while performing on stage with Venezuelan musician Devendra Banhart.

Only Daughter Anja is Fashionista in the Making

The stunning supermodel, Alessandra is no longer talking the fashion world by storm alone. The 10 years old daughter Anja Louise Ambrosio Mazur has joined her gorgeous mother in the business of looking good. The mother-daughter duo is regularly seen together, pampering themselves with matching pedicures, shopping, and yoga classes. Besides that, Anja has been modelling side by side with the Brazilian supermodel mom, Alessandra since a very early age.

The devoted and caring mother is prepping for her next modelling appearances. However, that does not stop the proud mother to take a selfie with her two adorable children. The busy mother makes the most of her time with her children before jet-setting towards her next assignment. According to the Mother Alessandra, Noah and  Anja are her “number-one priority”.The 37 years old model makes it her aim to arrange her schedule to spend as much time with her children.

The name Anja is a female name from the Russian pet form of Anna which cognates to English Anya. The meaning of the lovely name Anja is “grace”.