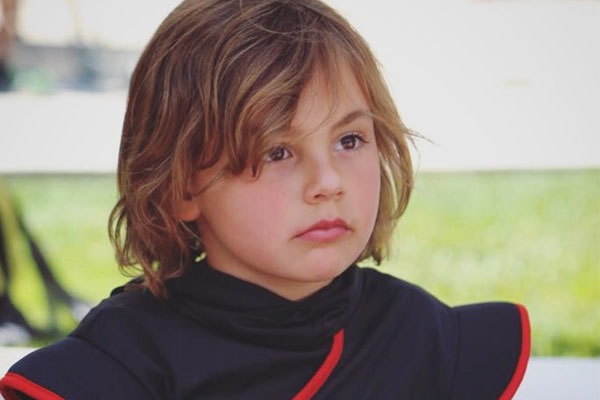 The Brazilian supermodel and actress, Alessandra Ambrosio’s son, Noah Phoenix Ambrosio Mazur, was born on May 2012 in Florianopolis, Brazil. The youngest son of Ambrosio with her former fiancee Jamie Mazur, Noah is the elder brother of sister, Anja Louise, who was born on the year 2018.

The proud parent of two beautiful children, Alessandra exchanged rings with businessman Jamie Mazur on the year 2008. However, the former partners ended their ten years long engagement on March 17, 2018, because of some unforeseen disputes.

A post shared by Alessandra Ambrosio (@alessandraambrosio) on May 7, 2018 at 4:16pm PDT

The stunning Victoria Secret model and mother of little Noah shared birthday greeting for son Noah Phoenix through Instagram on 8 May 2018. The small birthday party included family and very few friends. The little Noah dressed up in an adorable Black and White Ninja costume and looked happy for his sixth birthday.

The proud mother has always celebrated her little boy’s birthday with extravagant parties and plans. However, the supermodel decided to make Noah’s sixth birthday small and special one in honour of his special day. Noah had streamers with his name and big jars filled with candy for all the people at the party to enjoy. According to the lovely mother Alessandra, the recipe for perfect birthday includes just cake, candles and cuddles from your loved ones.

The six years old Noah has a passion for photography and modelling despite his young age. Furthermore, young Noah is following his mother’s footsteps to make up a name for himself in the modelling industry like his model. Besides that, Noah joined his mother for stunning Harper’s Bazaar shoot, The Vogue cover star, Alessandre, was clad in an intricate floral ruffled kaftan, with her adorable babies as accessories, and her striking features enhanced with a radiant makeup.

The unisex name Phoenix is from the Greek “Phoenix” or “dark red”. Also, the Phoenix is an immortalized bird often in Greek and Egyptian mythology. The creature “Phoenix” has the power to rise from its own ashes. Besides that, the southern symbolism of “Phoenix” deals with purity, renewal, strength, health and the present moment in time.