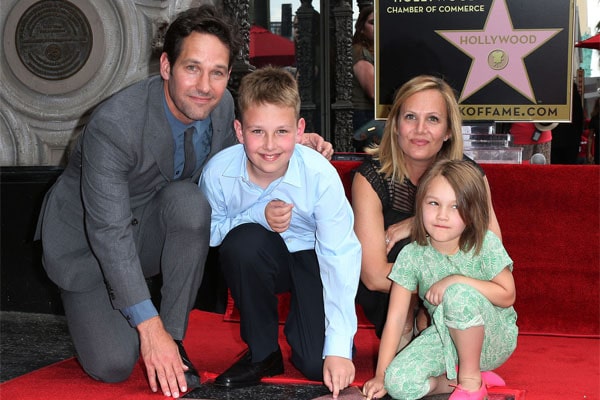 Paul Rudd and his wife, Julie Yaeger, are the parents to their kids, Jack Sullivan and Darby Rudd. Image Source: Zimbio.

The American actor Paul Rudd is one of the most charming actors in Hollywood right now. From portraying Pheobe’s husband Mike in the hit sitcom FRIENDS to playing the titular character in the Marvel superhero movie Antman, he has done it all in Hollywood. Along with a successful acting career, Paul is also enjoying a happy family life with his wife and two kids.

Paul is married to Julie Yaeger. After initially dating for a while, Paul and Julie got married in 2003, around 17 years ago. The two have been blessed with two children, a son and a daughter. Their first child is a son named Jack Sullivan Rudd, who was born in 2006. In 2010, the couple gave birth to their second child, a daughter named Darby Rudd.

The 49-year-old Paul Rudd is quite the father and has stated that being a father to his kids is the happiest thing in his life. He loves his children very much, and he is seen spending good quality time with his kids. His children are adorable and have inherited the charm of their father.

Paul and his wife, Julie, had their first child, Jack Sullivan, in 2005. Both Paul and Julie incredibly love Jack, and they love to spend time with him. Jack Sullivan is so much like his dad and seems like a doppelganger of his father  Paul took his son with him as he received a star in Hollywood Walk of Fame. The father-son duo’s chemistry is a great one, and they also go to watch NBA matches together.

Jack, who is now 15-years-old, is unfortunately not a big fan of Paul Rudd’s portrayal of Ant-Man, the enigmatic Marvel superhero.

When Paul mentioned to his son that he was going to be Ant-Man, Jack thought it was pretty stupid. Don’t worry, Paul, we think it’s pretty cool.

The actor also attended the game with his son and celebrated Kansas City’s Super Bowl victory in Feb 2020. Both of them were so much happy to see their supporting team win the match. It was shocking for Jack as well as his dad.

When asked to both of them, Paul said that it felt like he had seen colors for the first time in his life. On the other hand, Jack had nose bleeding with excitement. Plus, he added, saying that it was unreal. Paul and his son, Jack, were over the moon and celebrated the victory to the fullest.

Paul Rudd’s family turned from three to four in 2010 when Julie gave birth to their daughter Darby Rudd. Darby, who is now 10-years-old, is highly cherished by her parents. Paul regularly takes his daughter to walks and to visit different places. She also attended the event where Paul received the aforementioned star in the Hollywood Walk of Fame.

Paul and Darby share a special bond together. Paul loves his daughter a lot, and that is clear to see for all. An example of this came when Paul carried his daughter in his shoulder and took her to have ice-cream in New York. Aww, Paul! You’re such a good dad.

Nevertheless, Darby’s dad has kept her and her brother out of the spotlight. It appears as if his highest priority is giving them the most normal life he can provide to them.

Darby Rudd – The name Darby has got two origin places, Norway and Ireland. It means to be free from envy.