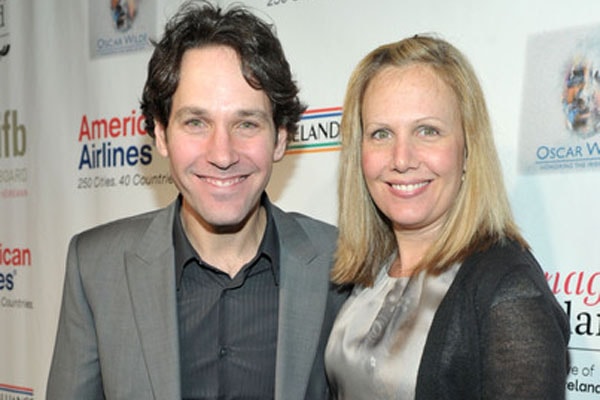 The Clueless star Paul Rudd‘s wife is Julie Yaeger. The couple of Paul Rudd and Julie Yaeger tied the knot in 2003, and they are parents to two children. The couple’s first child is a son named Jack Sullivan Rudd born in 2006. They welcomed their daughter Darby Rudd in 2010.

Julie Yager, Paul Rudd’s wife, is a screenwriter and former publicist. Unlike her celebrity husband Paul, Julie stays out of the public eye.

Little does the public know that the former publicist Julie Yaeger holds credit for the screenplay in the movie Fun Mom Dinner. The movie premiered in 2017 Sundance Film Festival. It is the first movie where the pair worked together. The gorgeous Julie who likes to remain away from the spotlight attended the movie’s premiere with her husband, Paul Rudd.

Since Paul and Julie are good at keeping secret, is it possible that the couple is working on a new movie project? Well, only the pair knows about that, but we hope to see them work together again and see them more often in public.

Although Paul Rudd has earned fame and name in the industry, his personal life with wife Julie Yager and two children Jack and Darby is out of the public eyes. 2019 marks the pair’s sixteenth years of togetherness, but the public has rarely seen the beautiful wife of Paul, Julie Yager.

However, Julie does not miss to attend her husband’s movie premiers. Maybe it’s the only times we get to see the star’s wife. The couple also doesn’t bring their children into the limelight. But they were there to witness their father being honored with the star in the Hollywood Walk of Fame back in July 2015.

We wish the Clueless heartthrob Paul Rudd play in more movies in days to come so that we could see his beautiful wife Julie and two adorable kids Jack and Darby in the premiers!