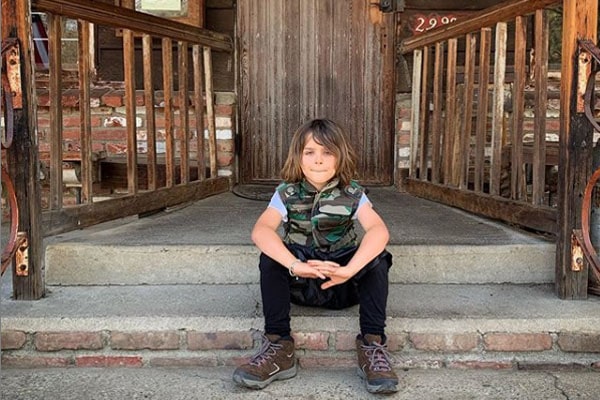 Selma Blair‘s son with her ex-partner, Jason Bleick, is Arthur Saint Bleick and was born in July 2011. Arthur’s parents are not together, and they had separated after two years of dating. Well, talking about his parents, Selma Blair is an American actress, whereas his dad, Jason Bleick, is a fashion designer.

Before that, Arthur’s mother married the American musician and writer, Ahmet Zappa in 2004. But their marriage came to an end after they divorced each other in 2006.

Arthur Saint is the ex-couple’s only son and has no siblings. You may not be familiar with Selma Blair’s son, as you know, the actress. So, to know more about adorable Arthur Saint Bleick, stick up with the article until the end.

Selma Blair’s Son Is An Adventurer

Well, Arthur Saint Bleick is a kid who loves adventures and all. Going through Jason Bleick’s Instagram, he usually posts photos of little Arthur doing adventurous things. The father and son really get along and cannot get enough of each other. On April 20, 2020, Jason shared a photo of Arthur, learning to ride a motorcycle.

Morning hiking with his dad to get on top of the world probably makes him feel alive. Spending time at beaches, wandering around forests, and exploring nature most probably brings happiness in Arthur’s life. Arthur Saint seems to be living his adventurous life to the fullest.

Plus, it looks as though Sela Blair’s son also loves capturing the memories into the lens. Exploring the world from such a young age must be bringing the best out of him. Furthermore, Arthur has his own Instagram account; however, it’s monitored and handled by his mom.

Not only that, but also he looks to be a big fan of the battle royale game ‘Fortnite.’ So, Arthur Saint Bleick is fond of learning new things and going on adventures.

Arthur Saint’s mom, Selma Blair, has been open about her diagnosis with multiple sclerosis. She always shares every aspect of how MS has changed her life and her son, being the major part of her journey. She also shared how her son has handled her MS diagnosis saying,

Selma was so happy and delighted when Arthur said he is proud, not embarrassed, by her health changes. She also stated that she strives to be a positive example for Arthur and not to focus on negative aspects that MS brought into her life. She always tells herself to live in a way that would be an example to herself and her little son.

Who Is Arthur Saint Bleick Living With?

You may be wondering with whom Arthur has been living with since his parents are living separate lives. But as we look into it, we can assume that he is spending his time with both of his parents.

But it doesn’t mean that Selma Blair isn’t close to him. If we go through Selma Blair’s Instagram, she visits her son, and the mom-son duo goes on vacations and holidays to have some bonding time with each other. Maybe both of Arthur’s parents are raising him together.

Arthur rose in the media when he shaved his mom’s head with a pair of clippers. Similarly, the actress appeared in the 2019 Race To Erase MS Gala with her son. Both of them donned with stunning outfits.

All in all, Arthur loves both of them equally and feels very fortunate to be their one and only son.

According to the Roman origin, Arthur came from the name ‘Artorius,’ meaning ‘noble, courageous.’ Similarly, the meaning of Saint is ‘sacred, holy’ according to the Latin origin.