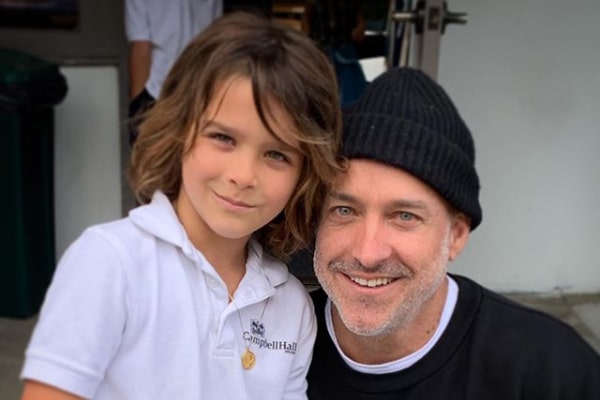 Although Jason Bleick came to highlight after his relationship with Hell Boy actress, Selma, he is a well-established fashion designer and deserves recognition. Image Source: Bleick's Instagram.

Relationships come to its end when certain situations lead to an overwhelming feeling. Some separate bitterly while some amicably. Among the amicable separation includes the fashion couple, Selma Blair and Jason Bleick. The couple made headlines when they were supportive of one another in their hard times.

Selma Blair’s ex-boyfriend seems to be a gentleman as the couple have shared custody of their child and is a responsible father. Although Jason Bleick came to light after his relationship with the A-list actress, Selma, he has potential. Therefore, to feed your brain with more information, here are few facts about Blair’s ex-partner, Jason.

Yes, Jason Bleick, Brown’s Requiem star, Selma Blair’s ex-sweetheart, is a fashion designer. Jason was born in 1970 and grew up in Huntington Beach in the surf and skate culture. According to the Orange County Register, he had a long experience of designing for the action sports industry, i.e., 15 years of his career.

Furthermore, Selma Blair’s ex-boyfriend, Bleick, made his debut with Ever in 2003 as a creative director. The company described as a luxury travel collection for both men and women and had a handful of stores.

Likewise, Jason previously served as a creative director with the Burton Group, where he was in charge of the Analog textile brand. Furthermore, he also contributed as a vice president of design for Quiksilver and as senior design director in charge of humans and children for Volcom.

Selma Blair’s ex-boyfriend also designed for a Japanese fashion line, DEPACTUS, in 2015. He also founded his own company, Bleick Studio in 2011 and served as Chief creative director.

Jason Bleick has been enjoying his career as a fashion designer successfully and maintaining his privacy. But we do know that Blair’s ex-partner is responsible and is being a great father.

The Ex-Couple Dated For A Year

People are created to love and support one another. People cross paths at any moment and create beautiful relations out of it. Likewise is the love-story of American actress Selma Blair and her ex-partner, Jason Bleick.

The couples’ path crossed during a professional collaboration with EVER in 2010. Both Jason and Selma felt for one another and immediately fell in love. By 2011 the couple had started dating. They looked delighted and in love with one another.

Soon after a few months of their relationship, the couple was pregnant and expecting a baby. They were excited and were looking forward to the changes and impacts their first child would make in their lives.

The Couple Parted Ways Rather Amicably

Although the couple was excited about a change, Jason and Selma weren’t ready for what the future prepared for them. After 14 months of welcoming their first child, the power-couple decided to split amicably.

According to Daily Mail, the couple fought continuously and, as a result, parted their ways. Amidst all these, Jason Bleick’s ex-girlfriend, Selma, moved into a temporary apartment in LA’s Venice Beach.

Despite the break, the couple has maintained their friendship for the sake of their son, Arthur. Furthermore, Daily Mail also reported that once Jason and Arthur were spotted spending some quality time at a restaurant.

Both Jason and Selma seems to love their child very much and prioritize him more than their disrupted relationship. That’s the parenting goal.

Jason Bleick Is A Devoted Father

Aforementioned, the couple separated 14 months after the birth of their first child. However, Jason did not back from his responsibility. Jason understands that he has a substantially massive role in his son’s life. Therefore, he showers Arthur with all the love he has for him.

Jason Bleick’s Instagram is filled with his son and their activities together. He even shares his love for his son on Valentines’ day, captioning “#loveofmylife.” He sure is because Jason seems too busy with his work and has no time for relationships. Or, he is maintaining a very private life regarding his relationship.

It’s unclear about his relationship status, but his love for Arthur is immense, and he is a devoted father.

Stepped Up To Help Selma During Her MS Battle

Hell Boy actress Selma Blair experienced a lot of complications since the birth of her first child. She had recently talked about how her ex-partner, Jason stepped in during her multiple sclerosis battle.

In an interview with People, Selma talked about their flexible custody arrangements how proud she was for the family as Jason had shown up considerably.

Furthermore, she said that her son had to see and endure a lot. But Arthur remains a massive source of her love and support. Selma added that her son is the driving force in her life and keeps her motivated in the best way.

Since the MS diagnosis, Selma had to go through a lot of ups and downs daily. However, she has been a wonderful mom, and Jason also stood up for his son and his ex-girlfriend in times of need.