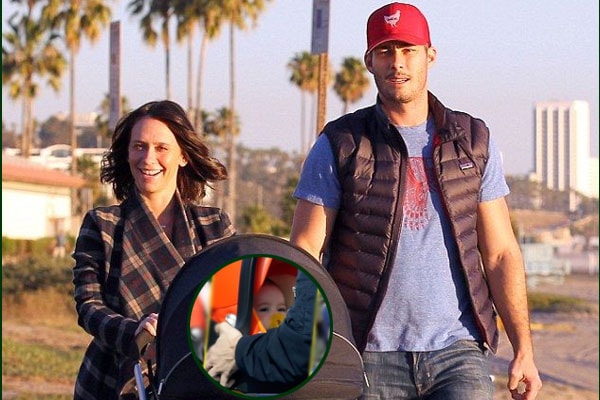 Atticus James Hallisay, Brian Hallisay‘s son together with his wife Jennifer Love Hewitt was born on the 24th of June 2015. Brian’s parents exchanged their wedding vows back in 2013 and the romantic duo is together ever since.

Atticus also has an elder sibling sister named Autumn James Hallisay. Autumn was born on the 26th of November 2013.

As a matter of fact, every child wants to spend most of their time being with their parents. Same as that, the 4-years -old Atticus seems to enjoy time with his parents. Being famous as a celebrity’s kid, there is no denying that all the media including different paparazzi often try to click the cute baby boy’s images.

However, Jennifer seems very media conscious for her children and doesn’t involve the kids to face any sort of media limelight.

Cute Baby Atticus Is Close With His Parents And Sibling Sister

As mentioned before, Brian Hallisay’s son Atticus has an older sister, Autumn James Hallisay. The sister and brother duo have 2 years of age gap and the two are too close to each other. Both of them seem to enjoy each other’s company and are like best friends.

Not many might know the fact that Atticus’ parents, Jennifer and Brian met on the set of the NBC series Love Bites and their chemistry hit off. The absolutely adorable pair started dating in March of the year 2012. A year after, the two got engaged and Jennifer got pregnant with Atticus’ elder sister, Autumn. Prior to Autumn’s birth, they had already got married and it was a very private event.

Atticus is a masculine name of Latin origin meaning “Man of Attica.” Whereas his middle name James provides the meaning of “supplanter or the one who follows.”