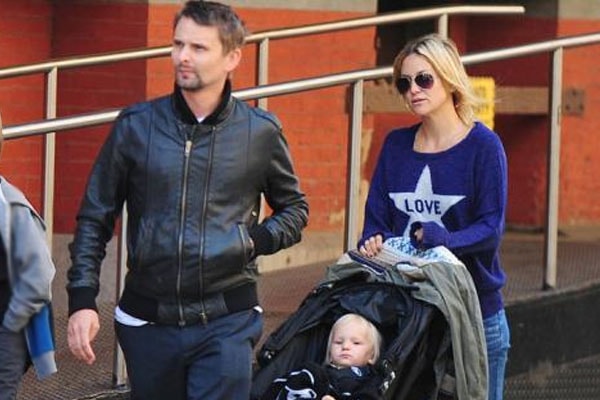 Bingham Hawn Bellamy, Kate Hudson‘s son with her ex-partner Matthew Bellamy was born on 9th of July 2011 in LA, USA. Bingham’s father, Matt Bellamy is a British singer and musician of the band Muse while his mother, Kate is one of the famous Hollywood actresses. Kate and Hudson started dating back in 2010 but they never got married.

Bingham Enjoys His Time With His Half-Siblings

Bingham’s parents never got married to each other. His parents began their relationship in 2010 and got engaged the following year. Bingham was a little over 3 years old when his parents broke up. Although his parents are now separated, they are still on good terms.

Looking at Kate’s Instagram profile it clearly seems that Bingham loves to spend his time with his elder half-brother Ryder. The two brothers also connect through music as both of their favorite band is Twenty-one Pilots. Not just that once, they together with their mother and Bingham’s father Matt went to enjoy the live concert of the Twenty-one Pilots in February 2017.

Bingham often visits his father, who is now engaged to model Elle Evans. Bingham’s mother is currently in a relationship with musician Danny Fujikawa and has a daughter with him, too.

She has three kids with three different men and has revealed about co-parenting with her exes. She said,

“I am very lucky to have partners in my life, and all of them in different circumstances, that we are able to figure it out.”

On the other hand, his father Matt is currently dating Elle Evans. The couple got engaged in December 2017 after 2 years of affair.

The Name Bingham Hawn Bellamy Was Inspired By His Grandmother

Bingham is a boy’s name which gives the meaning of “homestead at a hollow.” Not only that but prior to Bingham’s birth, Kate and Matt requested their friends and family members to plant and donate trees to celebrate the birth of their son instead of giving gifts to the newborn.