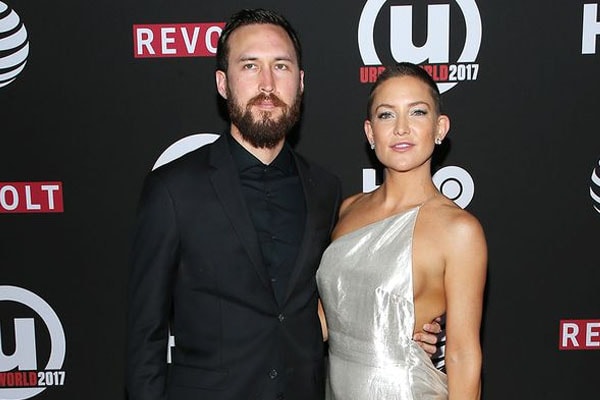 The actor and composer of Noisemakers on Noisevox, Danny Fujikawa, is the romantic partner of the Oscar nominee actress, Kate Hudson. The lovebirds have been together since December 2016 and share a young baby daughter, Rani Rose Fujikawa Hudson

The father of a young daughter, Danny Fujikawa, was formerly a singer and guitarist for the now defunct L.A. band, Chief. However, Fujikawa is now the founder of Lightwave Records in the year 2013.

Over a Decade-Long Relationship

Despite making their red carpet debut as an official couple on May 2018, the romantic pair has actually known each other for fifteen years. The handsome Fujikawa met his soulmate through his best friends, Sara and Erin Foster. The fairy tale couple shares a strong and intense bond and the intimate relationship between the couple is evitable in the pictures and frequent public appearances.

The power couple, Danny and Kate, welcomed their first child, Rani Rose Hudson Fujikawa, together on October 2, 2018. The romantic couple decided to name their daughter Rani (Ronnie) after his grandfather, Ron Fujikawa. According to wife Kate, Ron was the most special man and to name their kid after him which was an honor.

Back in April, Kate announced the birth of her only daughter with her to be husband, Fujikawa with an Instagram video of their exciting gender reveal party. Besides that Fujikawa is the stepfather of two young children, Ryder Russell Robinson and Bingham Hawn Bellamy from partner Kate.

It is not unsafe to say the stunning Hudson has a thing for rockers as Kate has previously been with The Black Crowes’ Chris Robinson. Also, Kate’s previous love of her life was Muse’s, Matthew Bellamy. Likewise, the now partner, Fujikawa is the former lead singer and guitarist for the LA-based folk rock band Chief, which he co-founded with his brother Michael. Despite the disbandment of the group, the members are still active and have remained friendly.

In an Instagram post on April 30, Danny posted a picture with his former bandmates. The picture prompted many fans to wonder whether Chief was getting together with his band or not. Husband and father Danny was a singer-guitarist for the now-defunct L.A. band. Besides that, according to his LinkedIn profile, Fujikawa has founded Lightwave Records in Los Angeles in 2013.