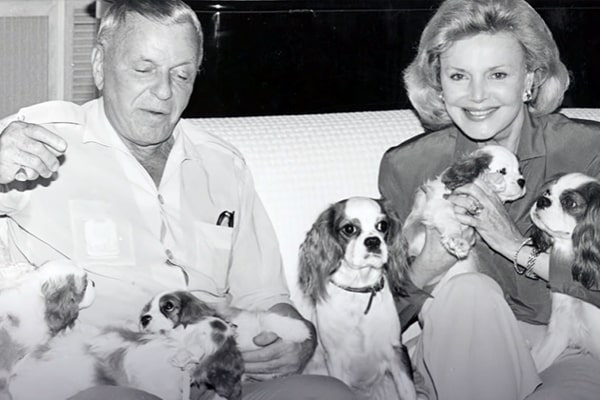 Barbara Marx Sinatra was an American model philanthropist but was famous as Frank Sinatra’s fourth wife. Before Frank, the gorgeous Blue-eyed beauty was married twice to Robert Oliver and Zeppo Marx.

Although married thrice, Barbara Sinatra welcomed only one child from her first marriage with Robert Oliver. Therefore, here we shall talk about Barbara Sinatra’s son, Bobby Oliver Marx, and his whereabouts.

Only Child To Barbara Sinatra and Robert Oliver

Aforementioned, Barbara Sinatra married thrice throughout her lifetime and welcomed only one child. Furthermore, she held her first son, Robert ‘Bobby’ Oliver Marx, with her first husband, Robert Oliver.

Unfortunately, there are very few details about Barbara Sinatra’s son, Bobby Marx’s childhood, but having successful parents must have helped him grow in a beautiful family environment.

Interestingly, it is well known that Barbara welcomed only one child throughout her lifetime, having married three individuals. However, Google suggests two kids when in fact, Robert Oliver Marx and Bobby Oliver Marx are the same people.

Sadly, Bobby Oliver Marx’s parents divorced in 1952 when he was only two years old. Furthermore, his mother, Barbara, married her second husband, Zeppo Marx, in 1959. Moreover, Zeppo reportedly wanted to adopt Robert, aka Bobby, but Robert wouldn’t allow it. Thus, he eventually took his last name.

Moreover, Zeppo also offered to pay Bobby’s tuition to a Long Beach military school. Although all of these sounds like supportive parenting, Barbara’s book, Lady Blue Eyes, contradicts it. She wrote that Zeppo wanted to keep her son out of the picture and that he was pleased with the decision of sending Robert, aka Bobby, to military school.

There are, indeed, several twists and turns in Sinatra’s son’s life, but his mother adored him. Hence, he is now a successful yet secretive man with his own family.

Married And Has A Daughter

As mentioned above, Barbara Sinatra’s son, Bobby Oliver Marx, has grown up to become a good human being and notoriously secretive.

According to Daily Entertainment News, Bobby, aka Robert O. Marx, works as the Hearst Castle Preservation Foundation vice-chairman. However, he has maintained a very private life and kept himself grounded. Therefore, we do not know much about his whereabouts.

However, Robert ‘Bobby’ Oliver Marx is happily married to his wife, Hillary Roberts. Sadly, there aren’t many details about either his marriage or his wife. But the couple has welcomed an adorable child, a daughter named Carina Blakeley Marx.

Furthermore, Barbara Sinatra’s granddaughter was out in the limelight compared to her son. Moreover, Carina seemed to be inspired by her grandmother and loved her beyond imagination.

Robert ‘Bobby’ Marx’s daughter, Carina Blakeley Marx, was told to write about the person who inspired her the most, and thus she wrote about her grandma. She later added that it was called ‘My grandmother the helper’ and to her surprise, Barbara had framed the essay on the yellow wall, Carina’s favorite color.

Again, sadly, Robert lost his mother in 2017 and decided to celebrate her life grandly.

Bobby’s Mother Died At Age 90 As An Inspiration

Twenty years of agony and sorrow came to an end on July 25, 2017, when Robert ‘Bobby’ Oliver Marx’s mother, Barbara, died at her home at age 90. Her funeral was genuinely mesmerizing as they remembered Barbara and Frank Sinatra’s philanthropic lifestyle, and Barbara was eulogized as a determined campaigner for kids.

Interestingly, Barbara Sinatra’s son, Robert Oliver, did not give a speech while his daughter, Carina, spoke very highly of her. She also added that her grandmother was an actual change agent and genuinely cared about everybody.

Carina further added that her grandmother, Barbara, remained proud of her roots until the end of her life despite gaining massive fame. Robert’s daughter later said that Barbara would continue to be an inspiration for her entire life.

Besides losing his mother, Robert seems to have maintained a good relationship with his step-father, Frank Sinatra. As a result, Frank left a $100,000 cash bequest for him.

Although Barbara Sinatra’s only child, Robert ‘Bobby’ Oliver Marx, decided to maintain silence about his whereabouts and did not speak during the funeral, he still loves her dearly. Thus, we shall hope to see more of him in the future.