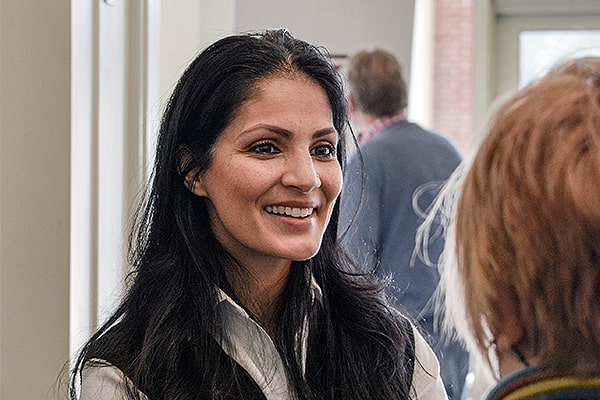 Ravi Zacharias' daughter, Naomi is an intelligent woman working for the betterment of the vulnerable group. Image Source: RZIM.

The founder of Ravi Zacharias International Ministries, Ravi Zacharias took his last breath on May 19, 2020. He fought cancer for an extended period of time and finally gave up on May 19 amidst his beloved family.

The Indian-born Canadian-American Christian apologist, Ravi was married to Margaret Reynolds from 1972 until his death. During their conjugal, the couple birthed three successful children, Sarah Zacharias Davis, Nathan Zacharias, and Naomi Zacharias. All three of their children grew up to be successful in their careers.

But today, this article is about the young Zacharias, Naomi Zacharias. Ravi Zacharias’ daughter, Naomi Zacharias serves as a director in RZIM’s humanitarian arm, Wellspring International. Born in a Christian family, Naomi had sheer faith in her God and hopes to do something great for humanity. Thus, she is contributing to help vulnerable women and children via Wellspring International. So without further ado, let’s hop in.

Naomi Zacharias graduated from Wheaton College with a BA in economics. According to RZIM’s official site, she joined the staff of RZIM after working in sales in Coca-Cola. Furthermore, she also worked as an intern in the Office of Public Liaison at The White House office. Moreover, she was also offered a position in the Justice Department.

Furthermore, Naomi has visited with camps in undeveloped parts across Europe and Asia including orphanages for children affected by HIV/AIDS throughout Asia and Africa, displacement camps to Iraqi refugees. Additionally, Ravi Zacharias’ daughter, Naomi visited international shelters for victims of human trafficking and domestic violence.

Naomi is doing a lot for the society via her organization for a good cause.

Career As An Author

Besides handling Wellspring International, Naomi Zacharias is an accomplished author. Children inherit from their parents and that is what might have intrigued Naomi’s interest in literature.

Ravi Zacharias‘ daughter, Naomi has published two books to date. Her first book, The Scent of Water: Grace for Every Kind of Broken was published in 2011. Naomi’s book is about the stories of women she encountered while directing the mission of Wellspring International along with her own creation. The book costs $16.99 for hardcover and is only $2.49 for the Kindle edition.

Likewise, Naomi Zacharias published her second book, Twelve Women of the Bible Study Guide with DVD: Life-Changing Stories for Women Today in 2012. The book costs $19.94 for paperback and $6.99 for the Kindle edition.

Naomi Zacharias’ books are making her profits and helping her add up to her earnings and reputation as an author.

Pays Tribute To Her Deceased Father

Ravi Zacharias’ daughter, Naomi has the sweetest heart of all and is a huge believer in music therapy. She taped a video tribute to her apologist father days before that no other treatment options were available for his advanced stage of cancer.

Furthermore, the director of Wellspring International. Naomi’s tribute featured a virtual performance by Metro Music Therapy; a rendition of ‘How Great Thou Art’. She said that she is proud to let her father know that she loves him very much.

Ravi Zacharias was undergoing treatment at M.D Anderson Cancer Center at the time.

The name Naomi is a feminine Jewish name of Hebrew origin which means ‘ pleasantness’. Originally, the name was pronounced with the stress on the ‘a’.