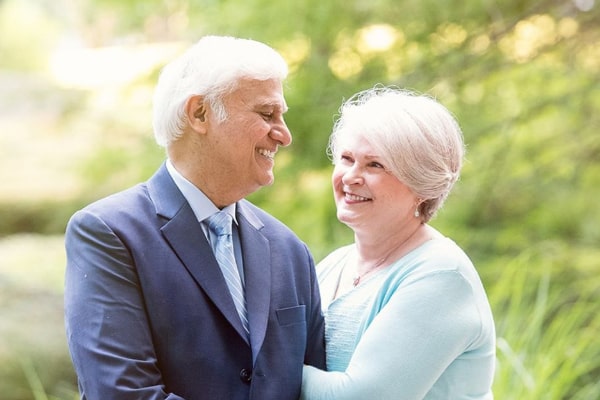 Although Ravi Zacharias is ceased among us, he is resting in a better place. Image Source: Facebook.

The hurt experienced when we lose someone dear to us is improbable. However, death is inevitable and unforeseeable. Therefore, we need to adapt our life without the presence of those who pass away. But can you imagine your life after your partner’s death after sharing every part of your life, every moment together for more than four decades? It’s absurd, isn’t it?

But the absurdity is going to be the life of Indian-born Canadian-American Christian apologist, Ravi Zacharias’ wife, Margaret Reynolds. The couple had been together since 1972. Their marriage was among very few who meant their vows and loved one another very indefinitely. Since love is all that needs to survive a deceased, Ravi will always outlive through his family and his wife. Let’s reminisce about their sweet love today.

Margaret Reynolds, aka Margie Zacharias, is a fantastic woman who was loved by her husband dearly. She and Ravi had worked together for several years in the ministry. The couple undertook a global preaching trip as a newly licensed minister with The Christian and Missionary Alliance, along with their eldest daughter, Sarah.

The couple had worked together for several years, preaching the truth of Christianity. In a 10-year challenge post, Ravi posted a picture of them together captioning “… the picture was taken in 2002,… this year marks 47 years in ministry together.”

Ravi Zacharias’ wife is a very kind woman who shares great faith in God like her husband. It is excellent to share the same beliefs and visionary in a relationship. Maybe it was the key to their relationship as they withstood every storm in their 48 years long marriage.

Ravi and Margaret first met at the church’s youth club. The couple got married in 1972, 240 miles away from Windsor, Ontario. The couple often flaunts their love and gratitude via social media. Ravi tweeted a tribute to his wife on the eve of their wedding anniversary.

Late apologist expressed how grateful he was as Margie gave her everything and said he could never repay her. On May 6, he tweeted that he loved her with his whole heart and recalled the day Margie gave her hand in marriage.

48 years ago she gave me her hand in marriage. By now she has given her everything. I can never repay you, Margie. I love you with my whole heart. ❤️ #HappyAnniversary pic.twitter.com/qoaw4KfjcT

Ravi loved his woman like she was the only person who existed for him. He even joked that his conjugal to Reynolds was indistinguishable to the royal wedding between Prince Harry and Meghan Markle. In the blog post, Ravi wrote how similar Prince Harry’s Meghan and his Margie were, pointing out they both were a beautiful blend of two races. He made several bizarre yet fascinating connections like how Meghan Markle is a Princess, and coincidently, Margaret went to school in Toronto on Princess Ave.

Furthermore, the praises were not limited to their anniversaries and special occasions; Ravi often tweeted photos of them together. In 2016, he tweeted, honoring her as a “treasured gift from God.”

The religious couple gave birth to three children, more specifically, two daughters and a son; Sarah Zacharias Davis, Nathan Zacharias, and Naomi Zacharias. In an interview with RZIM, she told that her key to growth while raising three young children was reading.

She further opened up about how a child’s query can make you question your faith, stimulating your thinking. Therefore, she believes that the time of shared thought on influential agenda with a child is crucial. Ravi Zacharias’ wife further continued that a parent’s role is not just to provide necessities but to teach to think critically and logically, especially for a Christian parent.

Furthermore, the Zacharias family sought to create traditions that were based on the truth about religious festivals. Margie said that the couple did not take the fun part out but made sure they knew the real background behind the feasts.

Despite having a squeaky clean reputation and religious persona, Margaret Reynolds’s husband was forced to deny that he was sexting with another woman. He replied to the accusation with a lawsuit.

The Christian apologist and author of more than 20 books, Ravi Zacharias, was accused of sexting and soliciting sexual material via email from a Canadian ministry employee Lori Anne Thompson. The lawsuit was settled in November 2017. Zacharias claimed that he was never unfaithful to his wife during their marriage. Ravi also claimed that he never met Ms. Thompson “alone, publicly or privately.”

Born on March 26, 1946, Chennai, India, Ravi Zacharias breathed his last among loved ones on May 19, 2020. The founder of Ravi Zacharias International Ministries died on Thursday at his home in Atlanta at the age of 74.

He had been battling sarcoma for a long time and finally breathed his last on Tuesday. Ravi and his wife continuously fought cancer together and updated fans about his health continually. However, Ravi lost his fight and now is in a safer and peaceful place with Jesus. Many people took social media to send him and his family prayers.

For now, Mr. Zacharias will be remembered through his preaching, his ways of living, and his tremendous contribution to society. Ravi Zacharias and his family are in our prayers and thoughts. Days will be tough, and the absence will be felt, but let’s hope Ravi Zacharias’ wife, Margaret Reynolds, and his family gathers strength to get over this sadness.