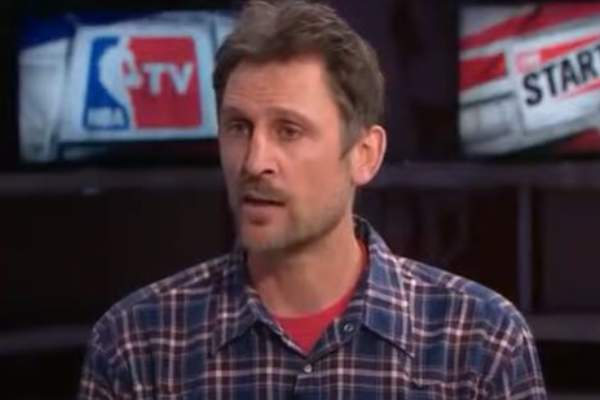 Brent Barry, born Brent Robert Barry, is a basketball broadcaster, executive, and former player. He currently serves as the vice president of basketball operations for the San Antonio Spurs. During his professional playing days, he played for various teams. Since retiring, he has been working as a broadcaster and vice president side by side.

To talk about his personal life, Barry is a proud father of two children, whom he shares with his former wife, Erin Barry. Over the years, Brent Barry’s children have remained away from the limelight. Many might be curious to know about them. So, stick with us till the end of the article.

The San Antonio Spurs vice president was married to Erin Barry. The former couple met at high school and tied the knot in 1998. While they were together, the ex-duo welcomed two children.

Brent Barry’s son, Quinn Barry, is his eldest child with Erin. The divorced duo welcomed him in 2001. As they entered parenthood for the first time, the ex-pair must have been ecstatic. However, as Brent prefers to keep things lowkey and private, he kept the news of his baby boy’s arrival away from the media. Furthermore, some of the sites suggest that his name is Quin Barry.

Likewise, in 2006, Quinn Barry’s parents gave birth to his little brother, Cade Barry. Just like at the time of his birth, his dad and mom did not share many details about his sibling. Over the years, Brent and Erin raised their boys away from the spotlight.

Unfortunately, after being married for 12 years, Quinn and Cade’s dad and mom divorced in 2011. They shared joint custody of the kids, and their dad was ordered to pay $4,000 to their mom every month in child support until 2013.

Quinn Is A College Student

Brent is known for his low-key lifestyle. Even after being in the limelight, he has mastered the art of keeping details of his personal life private. Likewise, the media has not gotten any sight of Brent Barry’s children as he has successfully kept them away from the limelight.

Furthermore, Quinn and Cade’s dad once posted a photo of one of them without showing their face. He wrote that his boy was upset that OKC was out of the playoff chase. It is not sure if that’s Quinn or Cade, but whoever he was, he could be seen wearing shoes that Kevin Durant signed in the 2013 Finals.

Other than that, Brent Barry’s son, Quinn, was a freshman at Colorado as of February 2020. Sadly, the information about the elder Barry’s major remains scarce. Likewise, Cade was in eighth grade and lived with his dad at that time.

Brent Barry’s Children Grew Up In A Basketball Family

Quinn and Cade come from a basketball background. Their dad played from 1995 to 2009 in different teams like Los Angeles Clippers, Miami Heat, Chicago Bulls, Seattle Supersonics, San Antonio Spurs, and Houston Rockets. In October 2009, he ended his playing career, and in 2013, he began making regular appearances in his own segment: “The Bone Zone,” on NBA TV’s The Starters.

Likewise, since 2018, Brent has been serving as the vice president of the San Antonio Spurs basketball operations. On the other hand, Quinn Barry and Cade Barry’s grandfather is Rick Barry. He is a retired professional basketball player and ranks among the most prolific scorers and all-around players in basketball history.

Furthermore, Cade and Quinn’s uncles, Scooter Barry, Jon Barry, Drew Barry, and Canyon Barry, also played basketball. So, growing up in a basketball family, are Brent Barry’s sons also interested in the sport? Will the boys become the third-generation basketball players from the Barry family?

Hopefully, we will know in the coming days, and they will reveal more about themselves. Let’s hope the boys will make good names for themselves in the future. We wish them luck in their upcoming ventures.