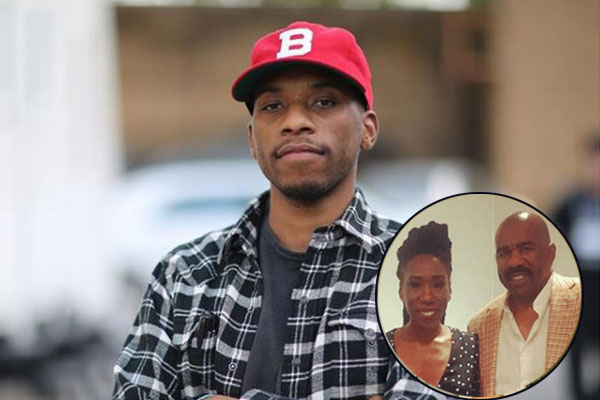 Steve Harvey‘s son Broderick Harvey Jr., was born through his ex-wife Marcia Harvey, on April 29, 1991. Marcia Is Steve Harvey’s first wife. The former husband and wife duo were in a married relationship from 1980 to 1994.

The handsome Broderick Harvey has got beautiful twin sisters named Brandi Harvey and Karli Harvey who came into this world through his mother’s womb in 1982. Besides that, Broderick also has got two half-siblings named Wynton Harvey and Lori Harvey.

Like his father Steve, Broderick Harvey Jr wastes no time when it comes to marketing his brand. The star son Broderick reportedly runs an online clothing store that goes by the name “Need Money Not Friends”.

In his store, Broderick sells statement t-shirts and other accessories like money clips. The celebrity son’s business seems to be going well and he’s obviously making some money selling his products. Likewise, Broderick respects his father Steve’s belief that his sons should earn their living on their own.

Unlike other celebrity children, Broderick Harvey’s best friends are his half-siblings. Steve Harvey’s son Wynton Harvey can be often spotted in Broderick’s active Instagram account. Wynton is Steve’s second wife Marie Lee Harvey’s only son. The half-brothers possibly hang out in parties and go out on dinners with their girlfriends together.

Broderick Harvey Jr’s girlfriend is not known to the public at the moment, but we’re sure he’s dating a lovely woman. Similarly, Broderick’s gorgeous half-sister, Lori Harvey, was born through his stepmother, Marjorie Elaine Harvey. Also, Broderick loves to spend time with his beautiful twin sisters, Brandi and Karli. Broderick mentions that his mother Marcia is his idol in life.

Being the son of a rich television personality, Broderick Harvey Jr has a lot going on his mind. Let’s hope that he will commit to a loving relationship with a beautiful girlfriend. In the future, Broderick will likely follow his father’s footsteps and settle down with a lovely wife and children.