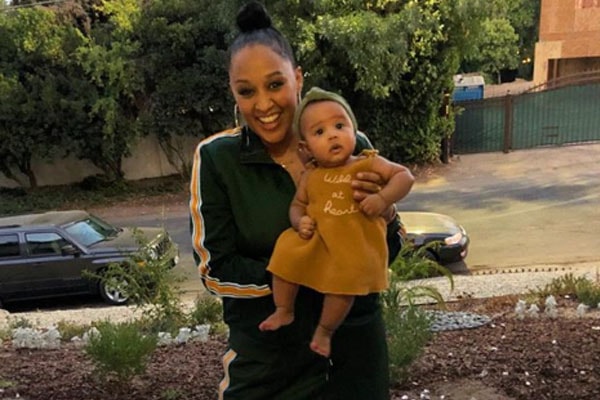 On the 5th of May, 2018, ‘The Game’ actress Tia Mowry gave birth to a lovely daughter named Cairo Tiahna Hardrict. She had her daughter with her husband, Cory Hardrict.

During the time of the birth, the cute Cairo weighed in at 6 pounds and 4 ounces and was measured 19.8 inches long. Tia and her husband, Cory’s happiness, contained no boundaries after welcoming their second child together. Cairo has got an elder brother named Cree Taylor Hardrict.

If you go and scroll through Tia’s Instagram handle, then you will know how much she cherishes about her daughter. She has got photos of the adorable Cairo all over her feed. Plus we must admit that she is adorable.

Over the period of her pregnancy, Tia kept her fans updated with her pregnancy photos. After the birth of her daughter, not just Tia and Cory but their fans were delighted too. Every time she posts a picture of her daughter Cairo, there is a flood of comments of her followers stating how lovely her little one is.

Only time will let us know that if Tia Mowry’s daughter will follow the footsteps of her mother. Well if she does, Tia would feel proud to guide her. For the time being she is too busy being a cutie.

There is a special kind of bonding between Tia Mowry’s children. Tia Mowry’s son Cree is already feeling obliged to his sister Cairo. He has already shown the qualities of being a responsible elder sibling towards Cairo. It was proved when Tia Mowry’s daughter Cairo was being bottle-fed by her brother Cree.

First of all, Tia chose the name Cairo Tiahna Hardrict to match the initials of both of her children, i.e. ‘C.T.H.’ The name Cairo is of Arabic origin meaning “victorious,” and it is also the capital of Egypt.

As for the name Tiahna, it is of English origin which means fairy queen. So it looks like Tia took her time to decide a name for her daughter.