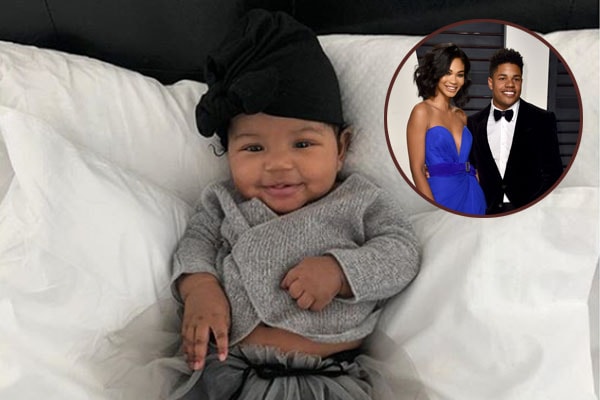 Supermodel Chanel Iman‘s daughter Cali Clay Shepard was born on the 10th of August 2018. Cali Clay is the firstborn of Chanel whom she had with her husband, Sterling Shepard.

Both Chanel Iman and Sterling Shepard were delighted to welcome their first child. Chanel announced the news of her daughter’s arrival on her Instagram profile and stated that the little Cali Clay Shepard was worth every push and contraction. We bet Chanel Iman’s parents, China Robinson and Tic Prince both were glad to become grandparents.

Many people must be confused, but no, it’s real. The 4-month-old daughter of Chanel Iman and Sterling Shepard is already a social media star. The cute Cali has got over 17.4K followers on her official Instagram account as of December 2018. And now many must be wondering how can such little girl have her social media account, well, it is run by her model mother, Chanel and athlete father Sterling.

Most of Cali Clay’s feed is filled with cute and adorable videos and pictures of her, at times single and at times with her parents.

As Cali Clay Shepard is small, she has got a lot of more things beyond her. Chanel must be waiting eagerly for her little one to grow up. And when she does, Chanel surely will be spoiling her a lot. We wonder what will Chanel Iman’s daughter Cali Clay Shepard be when she grows up, a supermodel like her momma Chanel or an athlete like her father, Sterling.

Nevertheless, no matter what Cali does, Chanel will be supporting her throughout her career. According to Chanel, her daughter Cali Clay is the most precious gift to her, to which she calls the gift of love, aww.

When Chanel Iman announced the name of her kid, many found it precious. Cali is a Greek baby name in which it means “most beautiful.” And looking at Cali Clay Shepard, she definitely seems to be one of the most beautiful.

As for the name Clay, it is the short form of Clayton which means settlement near the clay pit.