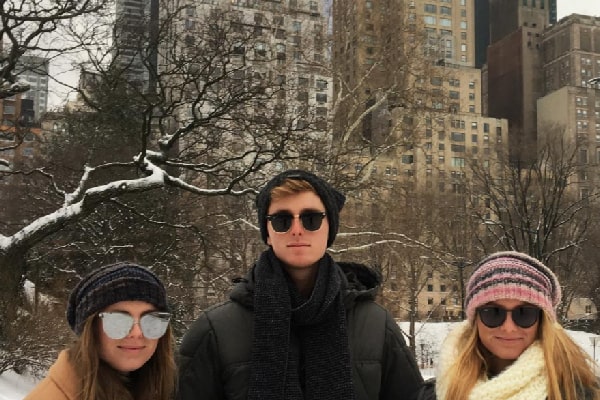 Charles Esten Puskar, professionally known as Charles Esten, is an American actor, comedian, and musician recognized for his role as country singer Deacon Claybourne in the show Nashville. He also appeared on an improvisation show named Whose Line Is It Anyway? Having started in 1988, Esten has enjoyed a thriving career.

Along with his successful career, Charles also enjoys a blissful marital life with his long-time partner, Patty Hanson. The Esten couple got married in 1991 and shares the same passion for one another to this date. The couple also welcomed three kids, two daughters, and a son in their decade-long marriage. Furthermore, Charles Esten and Patty Hanson’s children are all grown-ups and are now working to shape their future. Therefore, here is everything about Esten’s children and their whereabouts.

Not all people are fortunate enough to find the right person at the right time. However, Charles Esten and Patty Hanson were lucky to have found one another at a young age and, more importantly, cherish their relationship since their college years.

After years of dating, the Esten couple finally got married on 2 November 1991. The couple exchanged vows in an intimate ceremony surrounded by friends and families. Also, children are a sign of change, and thus, the couple changed their lives thrice as they welcomed three kids into their family.

Patty Hanson welcomed her first kid, Taylor Puskar, followed by her only son, Chase Puskar, and the youngest, Addie Puskar. All three kids have accomplished enough for their young age. Therefore, let’s get to know Charles Esten and Patty Hanson’s children.

Oldest In The Family, Taylor Puskar

The arrival of a young child is always an exciting period for a couple. A similar case was with the Esten couple when they held their first child, Taylor Puskar aka Taylor Noelle. The firstborn in the family, Taylor, is sought after for his love for music. She has been in the music industry for as long as she remembers and directs her Instagram followers towards her Spotify page. Furthermore, she performs on several occasions and has been a part of many festivals around the States.

While going through her social media, we also get to witness bits of her childhood. She seemed to be a happy child and is close to both her parents. Moreover, Taylor uploads several pictures of her parents, showering her love and appreciation for them.

Besides having a successful career and an excellent relationship with her parents, Taylor seems to have found the love of her life.

Both Taylor and her partner, Charlie Green, are musicians. The couple has been together for three golden years and is looking forward to spending more years with each other. Well, Taylor Puskar is a beautiful person with a humble personality. She also loves her siblings with all her heart and extends her wishes via Instagram.

Chase Puskar Is A Research Assistant

As the second child in the Esten family, Chase Puskar is also a successful person with a beautiful personality. The middle child in the family is Charles and Patty’s only son.

Furthermore, Charles Esten’s son, Chase Puskar, plans on completing his Master of Aerospace Engineering Sciences with a focus in Astrodynamics and Satellite Navigation Systems. Besides the major, Chase also worked as a Project Manager for a few months at CU Boulder.

Besides work, Patty Hanson’s son Chase also worked as a fundraising volunteer at Leukemia and Lymphoma Society. Well, Charles and Patty are very proud parents of a dedicated son. Not just a reliable professional, Chase also lives his life to the fullest. The social bee often posts about his social life on Instagram.

Moreover, the adventurous young lad is an avid dog lover and is committed to Tori Oberholtzer. The young couple has been together for quite some time and traveled together to various beautiful places. Interestingly, the pair also owns a dog named Boulder together. Seeing the progress, we might even anticipate their wedding soon.

The Youngest In The Family, Addie Puskar

Well, the youngest in the family is often spoiled by the older members of the family. Perhaps, Charles Esten and Patty Hanson’s daughter, Addie Puskar, is spoiled by her parents’ and older siblings’ love.

The Esten siblings chose a variety of careers and the youngest, Addie is the sportsperson in the family. She has been into soccer for as long as she could walk. Furthermore, Addie earned Tennessee All-State Honors in 2016 and 2017. She also helped her high school earn three straight district title and a state semifinal. She is now a part of the women’s soccer team in the College of William & Mary, Virginia.

The 21-year-old Addie is active on Instagram and shares her whereabouts with her 2000+ followers. Aforementioned, Addie is loved by her older siblings and wish her on special days. While we now see her as a healthy and happy young woman, when she was just two and a half years old, Addie was diagnosed with Acute Lymphoblastic Leukemia. Having experienced the effects of the disease first-hand, she and her family initiated raising funds for the patients, which is now called Leukemia & Lymphoma Society (LLS).

The Esten Puskar family has gone through tough times due to Addie’s battle with leukemia. But they have managed to come out of it with positive results and are now stronger together. The family now enjoys life to its fullest and Charles Esten and Patty Hanson’s children have grown up to be beautiful and hardworking individuals.

The name Taylor means a tailor and has English origin. Similarly, Chase means to catch/seize and originated from England. Likewise, Addie has a German origin, which means noble.