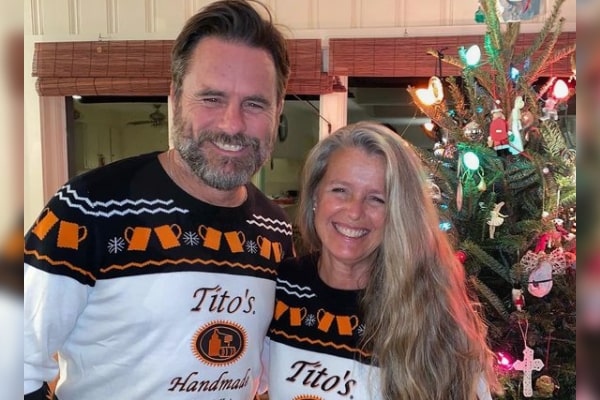 Charles Esten is an actor, musician, and comedian known as Chip Esten. Furthermore, he is known for his role on ABC/CMT drama, Nashville, which initiated his musical career. Besides having a successful career, he is also enjoying a blissful marital life with his college sweetheart, Patty Hanson.

Charles Esten’s wife, Patty Hanson, is a beautiful person who has been a tremendous support throughout his career. She continues to support to date alongside being a wonderful mother of three kids. Therefore, let’s get to know more about the beautiful person, wife, and mother, Patty Hanson Puskar.

Represents Charles Esten As His Manager

Furthermore, Charles Esten’s wife, Patty Puskar, introduces herself as manager and master of the calendar, which answers how Charles’ schedule is jam-packed but still manages time for his family.

Moreover, Mrs. Patty Hanson is also interested in photography and serves as the most outstanding cheerleader. Sadly, there isn’t much about Patty on the media besides the fact that she comes from a military family.

Patty, Charles Esten’s life partner, further shares pictures on social media honoring America’s Veteran’s contribution, including her father, brother, and sister-in-law. She also applauses their patriotism and admires their willingness to sacrifice for the nation.

Besides very little information on Charles Esten’s wife, Patty Hanson is living an outstanding and dedicated life aiding her partner’s career massively. But did you know Hanson and Esten met back in their college years?

Has Been Together Since College Year

Aforementioned, Charles Esten met the love of his life during his college year. According to William & Mary, they started dating midway through the junior year. But there’s an interesting and romantic story about how two strangers became inseparable.

Charles Esten’s wife, Patty Janson, shifted from Itay with her military family and was enrolled in William & Mary. Interestingly, her first choice of college was Duke, but she was accepted everywhere else, but Duke as fate would have it.

Well, Patty believes that God had plans for the soulmates to meet one another. Furthermore, she vividly remembered her husband’s popularity back in the day and was unsure of his identity. It turns out Mrs. Patty Puskar was dating someone else who decided they’d see other people, and they did.

Like a movie scene, Patty Hanson’s handsome beau was at the center ballroom playing a fundraiser. As Charles spotted his to-be partner at the time, he began singing Dire Straits’ Romeo and Juliet.

Also Read: Is Creed Bratton Is Dating Anyone?

The entire room was elated about the situation as Patty’s friends told her he was singing to her. And thus the romance like none other began. The beautiful couple is still together after several decades and is still in love.

Furthermore, Charles Esten believes that his spouse, Patty, is his biggest fan and loves him for who he is. Well, the power duo later got married in 1991 and are creating their ‘happily ever after.”

Happily Married For Over Three Decades

Like mentioned earlier, the Puskar couple were made for each other from the very start. Since the time they saw each other, both Patty and Charles have been practically inseparable.

Moreover, during an interview, Charles said that he fell in love with his wife and recalls he wasn’t monogamous until they met. Well, even after three decades of marriage, Charles and Patty are still in love and have undeniable chemistry both professionally and personally. Also, they share three kids who are massively successful in their own field of expertise.

As mentioned above, Chelse Esten’s wife, Patty Hanson, is a beautiful person and a doting mother of three kids. The pair is a father of two daughters and a son who have grown up into fine humans.

Patty gave birth to her first child, a daughter, Taylor Puskar, who has taken after her father’s footsteps. She is a singer and has found her perfect partner. Similarly, the couple’s mid-child, Chase Puskar, is a Research Assistant at the Colorado Center of Astrodynamic Research and hopes to complete his master’s in Aerospace Engineering Sciences.

Well, Patty Hanson allowed her kids to bloom in their way and practiced healthy parenting. Besides being a doting mother and a loving wife, she is also a very humble person who taught her kids to give back to society. The avid dog lover continues to spread love in the family and live in peace. Therefore, let’s hope to hear more of her in the coming days.